The Sherman was actually a great WWII tank 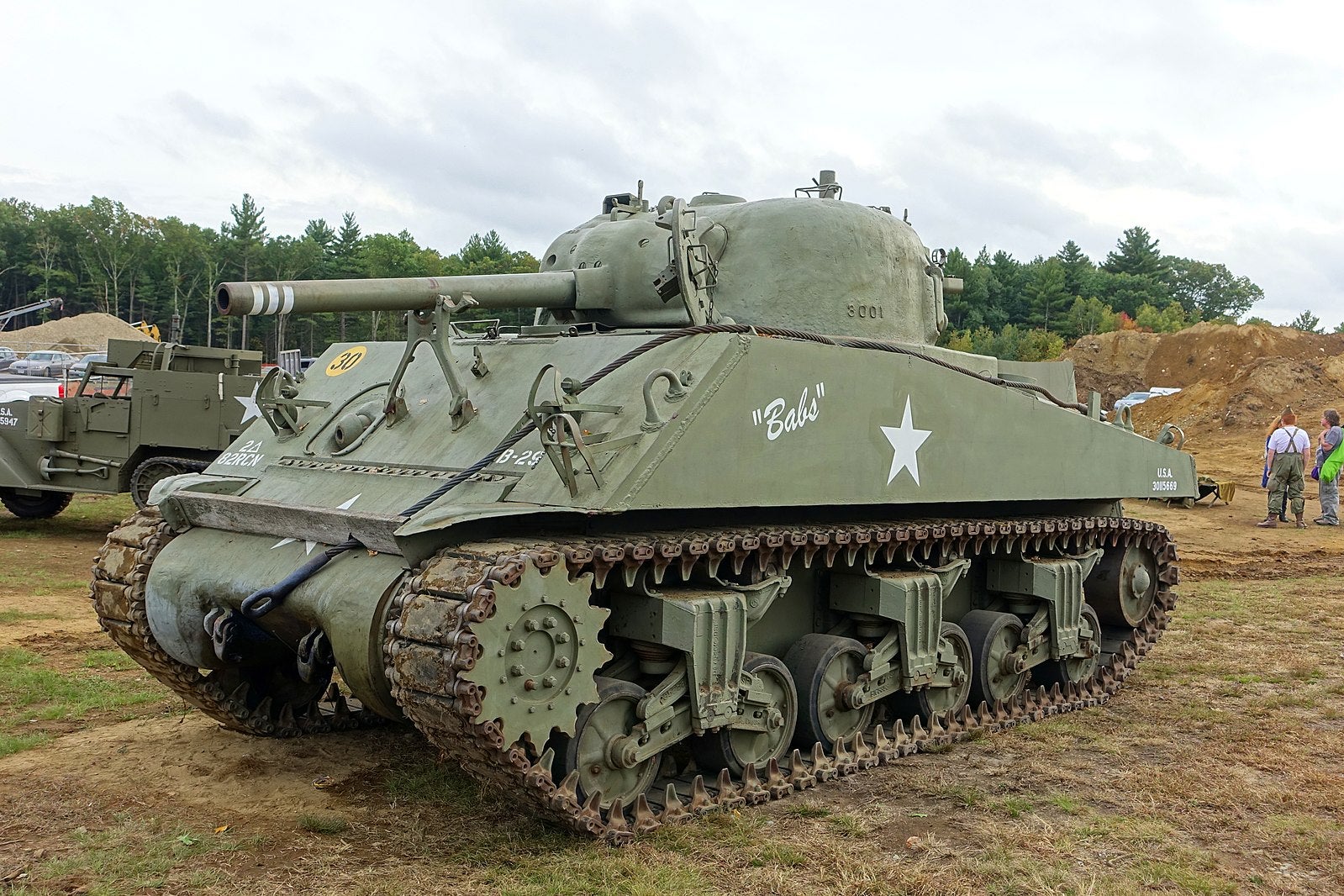 U.S. tanks were inferior to German tanks in WWII and were cut down in swathes, or so people tend to believe. After all, American tankers supposedly nicknamed the Sherman the “Ronson” because it “lights every time.” However, the Ronson Corporation did not start using this slogan to advertise their lighter fluid until the 1950s, and the Sherman was actually a very capable tank on the battlefield.

Thanks to media depictions in film and video games, the Medium Tank, M4 Sherman is remembered today as a tank with weak armor and an even weaker gun. However, this image is taken out of the context of the war in which it fought. Against the early-war Panzer III and Panzer IV tanks, the Sherman’s 75mm M3 short-barrel gun was capable of delivering knock-out punches. Moreover, the tank’s sloped frontal armor was adept at bouncing the incoming German fire.

As newer German tanks like the Panther and the Tiger appeared on the battlefield, the Sherman’s combat ability in a tank-on-tank fight was diminished. To counter the new threat, the Sherman was equipped with thicker frontal armor and a new gun. In 1944, the U.S. fielded the 76mm M1 high-velocity long-barrel gun which could actually penetrate a Tiger’s armor from the front. The gun had already seen action with U.S. Tank Destroyer Battalions. Mounted on the lightly-armored M18 Hellcat tank destoyer, the 76mm M1 was undoubtedly a threat to the German tanks.

In 1946, the U.S. Army’s Ballistic Research Lab conducted a study on the engagements fought by the 3rd and 4rd Armored Divisions during 1944. The study examined 30 armor-on-armor engagements and found that the Sherman had a 3.6-to-1 kill ratio against the German Panther. While part of the Sherman’s success is due to its new armor and gun, other wartime factors must be taken into account.

In 1944, the Germans were largely on the defensive against the allied invasion. Air superiority had all but been achieved by the allied forces. Close air support and strategic bombing severely crippled German industrial power and slowed the supply trains that moved parts, fuel and ammunition to the front. As a result, the Germans could not field a fighting majority of their over-engineered tanks, with many of them down for maintenance or sitting reserve. Moreover, many of Germany’s tank aces from earlier in the war, like Michael Wittmann, had been killed. German tanks were increasingly being crewed by inexperienced soldiers and sent up against allied veterans of Italy and North Africa.

However, despite the effectiveness of the 76mm M1, the preferred gun was still the 75mm M3. Why did troops prefer a gun with a shorter barrel that a Panther or Tiger tank commander would simply laugh at? The answer is the reality of combat in the European theater. Unlike their depiction in media, the majority of allied tank engagements on the western front were against anti-tank guns, infantry, and fortified positions like bunkers.

As previously mentioned, the Germans were less and less able to field their tanks as the war raged on. They also didn’t have that many to begin with. Roughly 9,000 Panther tanks were built between 1943 and 1945 and less than 1,400 Tiger I tanks were built between 1942 and 1945. Factor out the tanks that were destroyed prior to 1944, the ones that were yet to be built, and those unable to be fielded for one reason or another, and the peak of frontline Panther combat strength in 1944 was September at 2,304. However, that same month, Panther losses totaled 692. By comparison, the U.S. fielded an average of 2,000 Sherman tanks per Army Group.

With this in mind, the likelihood of a Sherman engaging in a tank battle with a Panther or Tiger was low. For the majority of their engagements against soft targets, the short-barrel 75mm M3 and 105mm M4 howitzer guns were more effective. While the 105mm howitzer shot a larger round than the 76mm M1, its short barrel propelled the heavy round at a low velocity. While it could fire a high-explosive anti-tank round that was capable of penetrating a Panther’s armor, it had to be shot at a high angle and with great precision in order to lob the slow and heavy round at the target. Rather, the 75mm and 105mm guns were used primarily to shoot high-explosive rounds. In fact, around 80% of rounds fired by all nations during WWII were HE and smoke.

The same BRL study that found the superior Sherman to Panther kill ratio also examined the lethality of American cannons and HE rounds since they were the most commonly used rounds. The study detonated an HE shell from each of the guns fielded during the war in a field and counted the number of casualty-inducing pieces of shrapnel within a 20-foot radius. The 105mm produced around 1,010 pieces of shrapnel and the 75mm produced 950. On the other hand, the late-war 90mm M3 long-barrel gun produced 672 pieces of shrapnel and the 76mm produced just 560. Because the 75mm was a low-velocity gun, it was able to use a longer shell that packed more high-explosive filler than the long guns. For this reason, it was actually more effective at eliminating the majority of targets that it came upon during the war.

While the Sherman did have its flaws like its high profile (which actually gave the crew a more spacious and comfortable fighting compartment), it was actually a very effective tool for the job that it was given. Supplemented by tank destroyers and supported by air cover, American tank columns rolled across Europe and smashed German defenses on their way to Berlin.