Boxers belonging to fraternity of world champions who served

Boxers belonging to fraternity of world champions who served 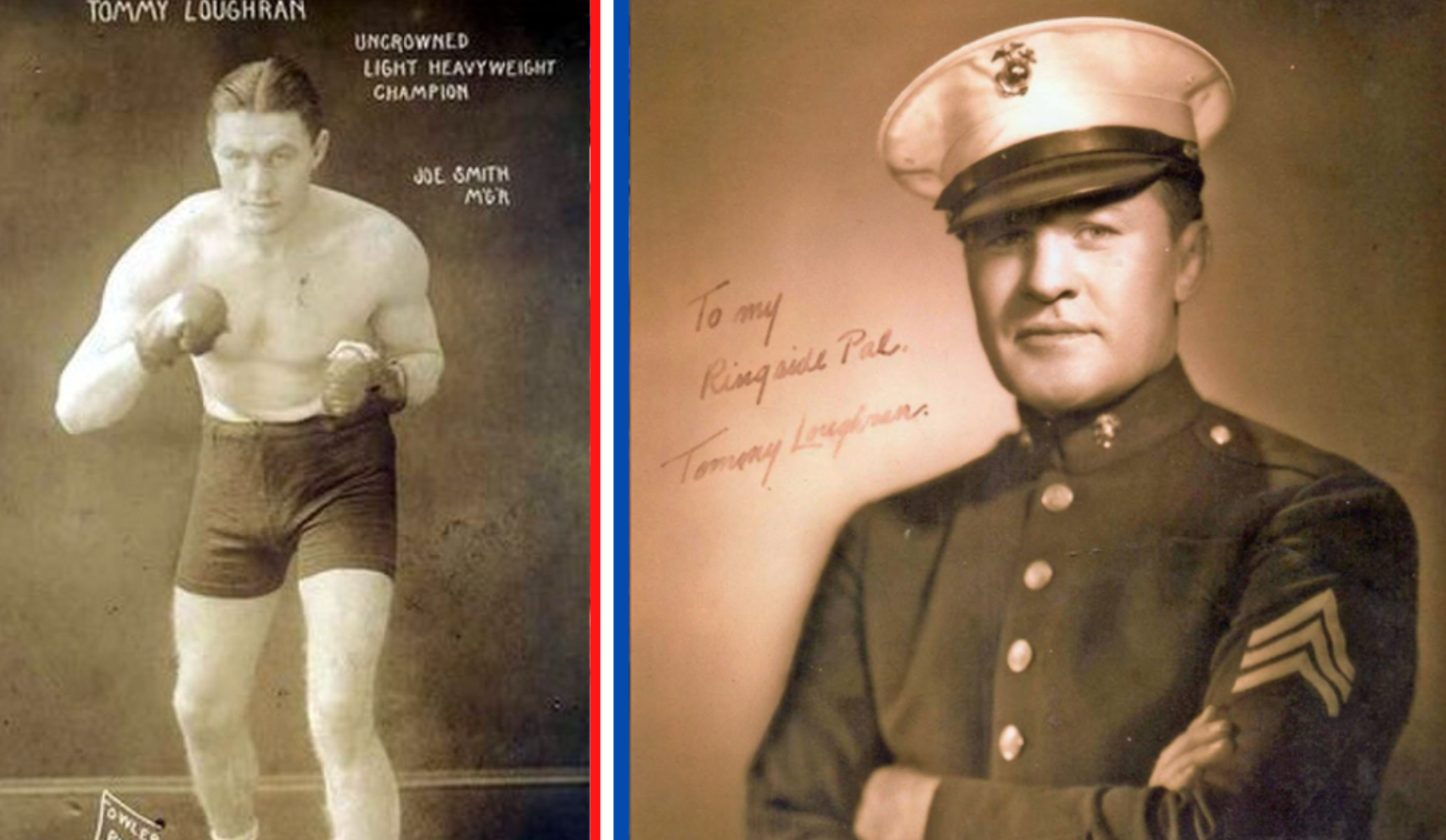 The relationship between military service and boxing is unparalleled by any other sport in the United States. Boxing has been used by all service branches as a form of self-defense training and a means to build discipline. Active service member boxers also compete in a variety of base-wide, inter-service, and USA Boxing sanctioned amateur tournaments throughout the year.

Cadets at the United States Military Academy at West Point are required to take a boxing class as part of their freshman (“plebe”) year curriculum. The West Point Boxing Team produced a fine All-Army boxer and professional fighter, Boyd Melson, who went on to capture the World Boxing Council (WBC) United States super welterweight title in 2015. Melson is just one former Army boxer to find success in the professional boxing ranks.

James Dominguez, co-host of the popular boxing podcast, “The Punchline, with Kelly Pavlik and James Dominguez,” and four-time All-Army Champion described Army boxers as, “the most conditioned and well-trained athletes in the world. They fight war in the ring and war on the battlefield. They adapt well and are flexible, something that is carried through the rest of their lives.”

The Marine Corps Boxing Team is so important to the branch’s history that notable former boxers are enshrined in the All-Marine Boxing Team Hall of Fame. A 2016 inductee into this illustrious hall was Marine Corps veteran of Operation Iraqi Freedom Jamel Herring. Herring was the only Marine to compete in the 2012 London Olympics, and the first active duty Marine to qualify for the U.S. Olympic Boxing Team since 1992. Herring turned professional in 2012, and went on to win the World Boxing Organization super featherweight title in 2019.

Jamel “Semper Fi” Herring continues his world championship boxing campaign when he returns to the ring on October 23, 2021. He is scheduled to make his fourth world title defense against Newark, New Jersey’s Shakur Stevenson at the State Farm Arena in Atlanta. The 35-year-old Herring, who holds a record of 23 wins (11 by way of knockout) and two losses, will face the undefeated Stevenson, a 2016 Olympic silver medalist.

Although Herring is the only current veteran to hold a world title in professional boxing, he is part of a proud and long line of former world champion boxers who served in the U.S. military.

Gene Tunney was the world heavyweight champion from 1926 to 1928. He put his budding professional boxing career on hold to enlist in the Marine Corps in 1917. During World War I, Tunney served with the 11th Marine Regiment in France and Germany, but saw no action. He spent most of the war, and the ensuing occupation of the Rhineland, on the Marine Corps Boxing Team. He helped increase morale among his fellow homesick service members by participating in inter-service boxing tournaments, eventually winning the U.S. Expeditionary Forces championship.

Tunney retired from boxing in 1928. During the Second World War, he answered his country’s call again when he received a commission in the Naval Reserve. During the war, Tunney served domestically and oversaw military fitness programs. At the conclusion of hostilities, Tunney retired from the Navy as a captain.

Tunney wasn’t the only notable boxer to serve his country during the First World War. World champions Johnny Coulon, Johnny Kilbane and Benny Leonard all served as instructors in the Army during the “Great War.”

Over 16 million Americans served in the Armed Forces during World War II. Men who made their livings in the boxing ring were no exception to the throngs of citizens who answered their country’s call to serve.

Joseph Louis Barrow, known to boxing fans as Joe Louis, is arguably one of the most beloved world champions in boxing’s long history. Heavyweight champion from 1937 to 1949, Louis put his boxing career on hold to enlist in the Army in 1942. Louis was considered too important to the war effort and morale to send into combat. Nevertheless, he played a significant role in raising much needed funds and bonds for the military. While in the Army, Louis participated in exhibition boxing matches and celebrity tours. Louis was accompanied on many of these tours with fellow soldier, and future multi-division world champion, Sugar Ray Robinson.

For his service in World War II, Louis received the prestigious Legion of Merit. Part of the citation read, “Staff Sergeant Barrow has entertained two million soldiers by frequent boxing exhibitions which entailed considerable risk to his boxing future as the champion heavyweight of the world, but he willingly volunteered such action rather than disappoint the soldiers who desired to see him in the ring.”

Joe Louis died on April 12, 1981. He was interred with full military honors at Arlington National Cemetery under the under the orders of President Ronald Regan. His gravestone bears a bas-relief image of the fighter and an inscription of his moniker, “The Brown Bomber.”

Non-boxing fans probably associate James J. Braddock with Russell Crowe, the actor who played the “Pride of New Jersey” in the 2005 film Cinderella Man. Braddock retired from professional boxing in 1938, having held the world heavyweight title from 1935 to 1937. At the outbreak of World War II, he enlisted in the Army and became a commissioned officer. Captain Braddock trained service members in hand-to-hand combat techniques on Saipan in the Pacific theater.

Jack Dempsey won the world heavyweight championship in 1919. During World War I, members of the American public criticized him for not joining the military. Dempsey had the opportunity for redemption two decades later. At the outbreak of the Second World War, the then pushing 50 year old received his commission in the Coast Guard Reserve. Dempsey worked as a fitness instructor, raised war bonds and served at sea in the Pacific theater. He received an honorable discharge from the Coast Guard Reserve in 1952.

Philadelphia’s Tommy Loughran held the world light heavyweight title between 1927 and 1929. The popular fighter, known for his numerous acts of charity in his hometown, retired from professional boxing in 1937. At the outbreak of World War II, Loughran, around 40 years old, enlisted in the Marines Corps. He served as a fitness instructor at stateside military installations, including the Philadelphia Navy Yard. John DiSanto, founder of PhillyBoxingHistory.com, described Loughran as “famous and wealthy,” but a patriotic American “who still wanted to serve his country.” DiSanto added, “I know the entire nation pulled together during World War II, but it shows the type of guy Loughran was. He too did his part, even though he probably didn’t have to.”

“The Man of Steel” Tony Zale captured the world middleweight title with a victory over Georgie Abrams on November 28, 1941. Zale lost a non-title fight to fellow World War II veteran Billy Conn (Army) on February 13, 1942. After the fight, Zale enlisted in the Navy. Upon reporting to boot camp at Naval Station Great Lakes, the registration officer demanded to know his name and occupation, to which Zale replied with his real name, Anthony Zaleski, and profession of middleweight boxer. The officer replied, “I’d hate to be in your shoes, Zaleski. Tony Zale’s due in here this week.”

Zale, who relatives described as a man who loved his country and wanted to protect it at any cost, taught hundreds of service members valuable hand-to-hand combat skills, incorporating a number of boxing techniques. Tony’s nephew and author of the book, Tony Zale: The Man of Steel, Thad Zale, recounts that he was approached by a veteran at a book signing who told told him that the training he received from his uncle was the difference between life and death. The man told Thad, “In the Ardennes Forest he had run out of ammo, and was taken by surprise when the Germans rushed their line. He stepped quickly to his left as a German thrust his bayonet at him, and hit him full steam with his right hand. A perfect knockout. He then used his own bayonet to settle the affair.”

In his 2018 book, From Boxing Ring to Battlefield: The Life of War Hero Lew Jenkins, author Gene Pantalone described former world champion Lew Jenkins as a man who “fought his whole life.”  As a child, Jenkins battled extreme poverty during the Great Depression in the Texas Dust Bowl, and fought in alleys and carnivals for meager wages on the path to become a professional boxer in 1935. Jenkins held the world lightweight title between 1940 and 1941, before joining the Coast Guard during World War II. He later served gallantly in the Army during the Korean War.

In From Boxing Ring to Battlefield, Pantalone wrote, “In World War II, he fought in major battles, including the D-day Normandy invasion, winning British recognition for his valor with a citation. During the Korean War, he fought in two of the fiercest battles—Bloody Ridge and Heartbreak Ridge—earning one of the U.S. Army’s highest decorations, a Silver Star, for bravery.”

Before capturing the World Boxing Organization heavyweight title in 1991, Ray Mercer served as a soldier in West Germany. There, the former Army brat took up boxing at the age of 23 years old. Mercer credits the Army with teaching him the fundamentals of the sport in which he found so much success. As an Army boxer, Mercer found success as an amateur, winning a gold medal at the 1988 Seoul Olympic Games. He carried over his success as an amateur to the professional ranks in 1989. Mercer won 16 straight professional bouts on the path to a world championship.

Ken Norton, known as the “Fighting Marine” throughout his professional career, served from 1963 to 1967. During his time in the Marines, Norton took up boxing while serving as a manual morse intercept operator. As an All-Marine boxer, he won three All-Marine heavyweight titles and compiled an impressive amateur record. Norton turned professional shortly after his discharge from the Marines in 1967. His shot at the defending world heavyweight champion came on March 31, 1973, when he defeated Ali by split decision.

Leon Spinks served in the Marines between 1973 and 1976, fighting on the Marine Corps Boxing Team. Spinks went on to win a gold medal as a light heavyweight at the 1976 Montreal Olympic Games. The following year, he turned professional and won his first five fights by way of knockout. Spinks defeated Ali by split decision in a world heavyweight title fight on September 15, 1978.

Philadelphia’s Steve Cunningham served in the Navy from 1994 to 1998. He kicked off his amateur career as a sailor assigned to Norfolk Naval Station in Virginia. In the Navy, Cunningham was a member of the crews of the USS America and USS Enterprise. A National Golden Gloves champion in 1998, Cunningham turned professional in 2000. Cunningham held the International Boxing Federation cruiserweight title between 2007 and 2008, and again between 2010 and 2011. A tribute to his service in the Navy, Cunningham adopted the ring moniker “USS.”