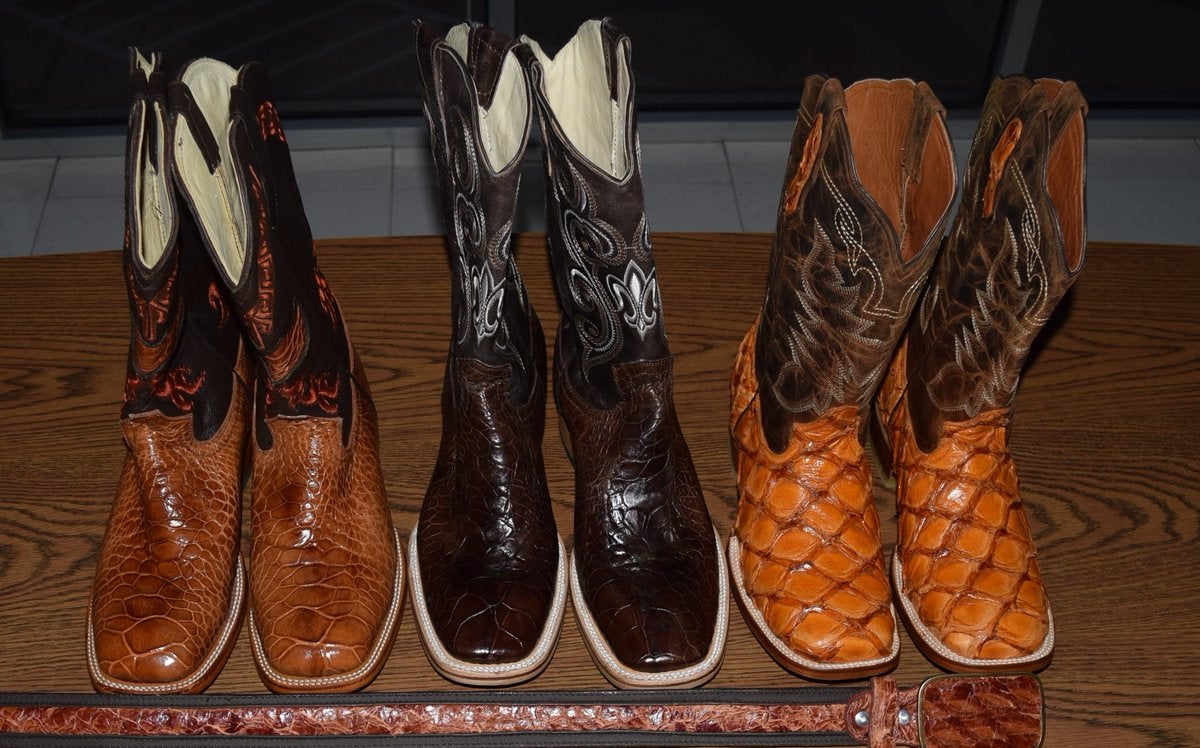 CBP Ag Specialists at DFW Airport intercepted these boots and belts made from sea turtles and an arapaima. Photo: Twitter.

The banning of shoes may sound unrealistic, but it is something that actually happens in the United States. Customs and Border Protection agriculture specialists in the US are always on the look out for goods such as bags, belts and shoes crafted using prohibited and restricted items.

Regardless of the items, if they are illegal, restricted or prohibited, then you will land in hot water. There are bodies and laws set to govern the unlawful trading of endangered species and their products. When you travel outside the US be aware the following items are a no-go.

Rubber soles on the other hand dry faster therefore cannot harbor these species. Invasive species can endanger the health of fish and other water animals and sometimes have an impact on humans. Besides, rubber shoes are more comfortable on long hikes to the water source. Another alternative to felt sole wading boots is the lug sole boots that are suitable for places with soft substrates. Lug soles are also better than felt soles because they do not freeze up so they can be worn during winter.

If fishermen wear felt sole wading shoes, they might transfer the invasive creatures from one fishing ground to the other. This will lead to a catastrophe as some of the water animals might die and even become extinct. Unfortunately, killing the invasive species can be as dangerous to the environment as the disease itself, so wearing boots made from felt should be avoided.

Cowboy boots made from endangered species

A startling discovery that arapaima leather is being used largely to make exotic leather in the US was made recently. Arapaima is giant freshwater fish found in the Amazon region in South America. Scientists have called for urgent research to confirm if increased cowboy boots trades affect the endangered species. It is feared that Arapaima might head in the direction of pangolin populations because they were the most illegally trafficked wild mammals worldwide.

The United States was the most significant contributor to the decline of pangolin species because they are historically the largest buyers of pangolin leather commodities. Even though the trade of pangolin leather items decreased since 2000, the Arapaima leather trade seems to increase every day. Illegal wildlife trade is a lucrative activity driving many species into extinction.

Boots made from sea turtles

Sea turtles rarely survive adulthood because of their slow-growing and late maturity process. Only 1% of the offspring make it into adulthood, making reproductive sea turtles ecologically pronounced to most successive generations of the population. Illegally killing one adult for meat, shell or skin has the same effect on the population as taking thousands of eggs.

Sea turtles are often illegally killed for their commercial value. Their skin makes high-quality leather which is used to craft different materials from boots to belts. All killings of sea turtles, taking their eggs, or selling their products is prohibited in the US because they subject the already endangered species to faster extinction.

The sea turtles are protected by the Convention on International Trade in Endangered Species of Wild Fauna and Flora, in which the US and more than 160 countries are parties. United States laws state that all wildlife and items crafted from wildlife entering the country be clearly marked and declared to customs officials upon entry.