7 kingly facts about the life of Alexander the Great 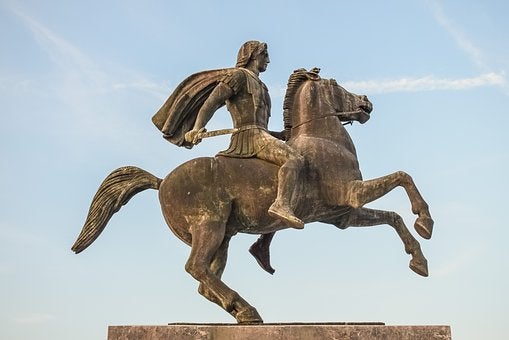 It is the year 69 BC. A Roman man stands before the state of an ancient conqueror. The Roman weeps, realizing that at his age this conqueror was master of the known world, while the Roman has accomplished nothing. The Roman’s name is Julius Caesar, and the statue is of Alexander III of Macedon, whose conquests changed the course of European and Middle Eastern history. Here are seven things to know about Alexander the Great.

In the middle of the fourth century BC, Macedon was a small kingdom north of classical Greece. City-states like Athens and Sparta looked down on their northern neighbors as barbarians. But for a hundred years the Greek cities had worn each other down through war, and King Philip II of Macedon knew the time was right to strike. He reformed his army and, through a series of diplomatic and military victories, came to dominate ancient Greece. The last resistance was crushed at the Battle of Chaeronea in 338 BC, uniting all of Greece under the king of Macedon.

2. He was tutored by Aristotle

In 343 BC, Philip hired the Greek philosopher Aristotle (who was Macedonian, but taught in Athens) to tutor then-thirteen Alexander. The prince studied everything from politics to philosophy to natural science, but he fell in love with Homer’s Iliad, the epic poem about the demigod Achilles and his struggle with pride. Aristotle even wrote an abridged version of the text for Alexander, who carried it with him during his campaigns. Alexander would also send rare plants and animals found on his campaigns to Greece for Aristotle to study. By all accounts, Alexander had an education fit for a king.

3. He fought to claim his father’s throne

Alexander’s mother Olympias, Philip’s fourth wife, was not Macedonian, but Alexander was still Philip’s heir. The prince even fought with Philip at the Battle of Chaeronea and proved himself a capable warrior. That same year, however, Philip married a Macedonian noblewoman named Cleopatra Eurydice, whose pure Macedonian offspring could challenge Alexander’s succession. When Philip was assassinated in 336 BC, Olympias had Cleopatra Eurydice and her daughter by Philip burned alive; Alexander was furious, but he also assassinated several of his relatives to prevent them from stealing his throne. There was a rebellion from several city-states, but Alexander suppressed it, proving himself the Macedonian king of Greece.

4. He conquered the Persian Empire

Alexander spent two years pacifying the Balkans and stabilizing his rule before turning eastward. In 334 he and his army crossed the Hellespont, the straits connecting Europe and Asia Minor (modern Turkey). He then conquered, in just four years, the Persian Empire which had controlled all the land between the Levant coast and the Iranian Plateau for centuries. Alexander chased the Persian king Darius III – one of the most powerful men in the world – through the empire until Darius was captured and executed by one of his own nobles. Throughout his conquests Alexander established many cities, all of them named Alexandria.

5. He pushed his troops to their limit

Alexander reached as far as the land the Greeks called India (modern Pakistan). In 327 BC Alexander left the Middle East for his Indian campaign, where he continued carving through kingdoms and founding cities named after himself – Alexander’s bread and butter. After defeating the Indian king Porus, Alexander’s Macedonian army mutinied and refused to march any further. The disappointed king was forced to turn back.

6. He died under mysterious circumstances

Alexander started marching his troops back to Persia. After dealing with unscrupulous governors and another rebellion from his troops, he arrived at the imperial capital of Susa, where he would spend the rest of his short life. The king contracted a fever in the city and died soon after. For thousands of years scholars have debated the cause of his death, from natural causes to poisonings. Alexander’s proclivity towards alcohol, many say, exacerbated whatever made him ill in the first place. In 323 BC, a mere thirteen years after his coronation, Alexander the Great was dead.

7. He changed the course of Western civilization

Alexander’s conquests established an empire from the Balkan Peninsula to the Indus River. Greek became the language of the upper class from Macedon to Persia, creating a new path for social advancement. After his death, Alexander’s empire was divided up between his generals, whose successor-states came to be known as the Hellenistic (or “Greek-ish”) kingdoms. In the coming centuries, those states would be swallowed up by the Romans and the Arabs, who were inspired by the greatness of Greek culture. It was Alexander whose conquests created the Greek-speaking world that would provide the foundation for the civilizations to come.