FOX host asks Americans on D-Day: Are you living a life worthy of our fallen? - We Are The Mighty

FOX host asks Americans on D-Day: Are you living a life worthy of our fallen? 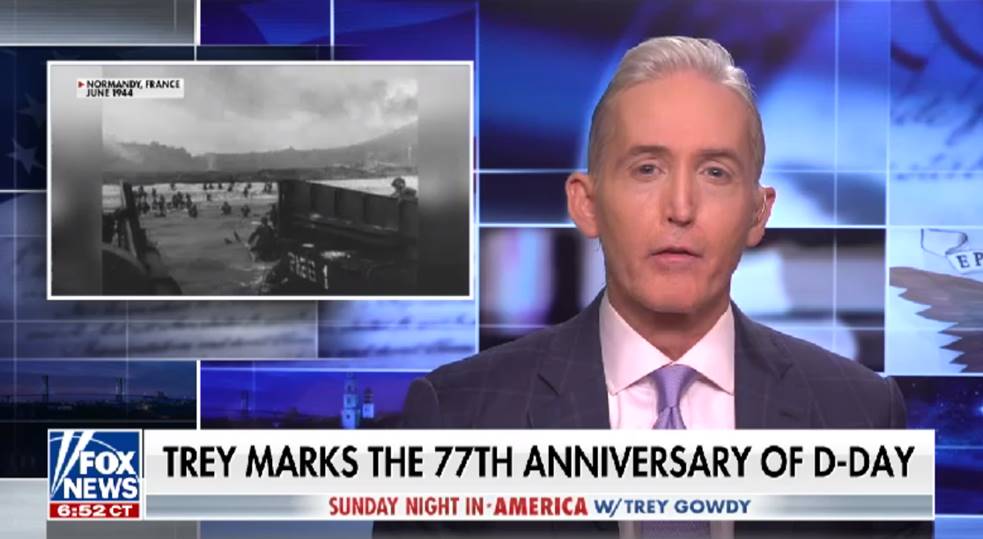 On June 6, 2021, the world recognized the 77th anniversary of D-Day, arguably the largest seaborne invasion in history. Though it led to the eventual freeing of Europe from Nazi-controlled Germany, the cost was high and heavy. Historians estimate that as many as 10,000 allied troops lost their lives on the Normandy beaches that day. FOX’s Sunday Night in America hosted by Trey Gowdy memorialized those heroes. But Gowdy took it even further by talking directly to viewers and asking them if they were living their lives to be worth the willing sacrifices made by our fallen.

The host ended his show on Sunday by reflecting on D-Day, noting that although it feels like so long ago it was within his own parent’s lifetime. Gowdy also addressed the recent Memorial Day and how it is often perceived or recognized by the country. “Memorial Day is associated in some of our minds with fireworks, backyard cookouts and swimming pools. All of that’s good. It’s been a long, hard year for our country and taking a day to simply enjoy life and the company of those we care about is a good thing,” he said in his address. It was his next words that revealed his direct and vital point. “I think there is a seminal question to be asked on Memorial Day and on this D-Day Anniversary. It’s a question really only for those who can no longer answer. The question is simply this: ‘Was it worth it?’.”

In the month before D-Day, 1.5 million American troops were deployed to Great Britain. History has long proven the remarkable evidence of unwavering courage the men on those beaches maintained as they waited for the invasion to begin. You see, they knew the chances of dying were high. Then General Dwight Eisenhower was told at one point casualties alone could be as high as 75 percent. They did it anyway. By August of 1944, over 20,000 Americans would lay down their lives in the battle to free the world from the Nazis.

As the country reflected on the somber anniversary, Gowdy asked a poignant question of the viewers watching: “I don’t think it’s too much to ask for us to simply reflect on whether we have become as a people, as a nation, as a country, something worth losing your life over. I do wonder sometimes what those women and men who died on behalf of this country would say,” he said. Later, he took it even further. “Have we become the country you imagined we could be when you fought and fell? Is this the America you dreamed of when you were taking your last breath far removed from your family?”

The picture painted with his words are undeniably uncomfortable for many to think of, but no less true. The Normandy invasion of D-Day changed the course of the war and quickly ended Nazi Germany’s reign. Those who served during that time period became commonly referred to as the “greatest generation” with over 12 million Americans raising their right hands. The patriotism so loudly heard and visibly seen during that period faded as America entered into new wars years later. Since then, there have been moments we’ve witnessed with horror as well as those to be celebrated, as we grew and advanced as a country. After the terrorist attacks of September 11, 2001 it felt as though we were more connected than ever, not unlike that D-Day feeling Americans may have been experiencing. But it would be fleeting. Though none of us would ever wish another attack, many openly long for the America of the days after 9/11. We cheered and honored our men and women in uniform, united in the commitment to eliminate evil and defend our country. 20 years into the war, we’ve lost that.

“It is much easier to think about the beginning of summer and the pool and the longer days with the sun setting later into the evening. But for those for whom the sun has already set, never to rise again, what would they tell you – if only they could,” Gowdy implored. “I think the best way to honor the men and women who died to found, preserve, perfect, defend and improve this country, is to make sure their sacrifice has a meaning, a purpose, an everlasting purpose. That is the greatest gift we can give back to those who gave their greatest gift to us. ‘Was it worth it?’ That’s the question for us to reflect on.  And the answer is really up to us.”

According to Nielsen Media Research, almost 1.3 million people watched Gowdy utter those words. It was a powerful message of reflection citizens of this country would benefit from spending time sitting with not just on Memorial Day or D-Day remembrance, but every day. As we look at where we’ve come from and where we are going as modern Americans, are we worth it? The important take away from Gowdy’s message seems to be that we should always strive to be. The weight of those lives lost in the name of our freedom and opportunity as Americans deserves nothing less.