Once in a century event: How you can place flowers at the Tomb of the Unknown Soldier - We Are The Mighty

Once in a century event: How you can place flowers at the Tomb of the Unknown Soldier 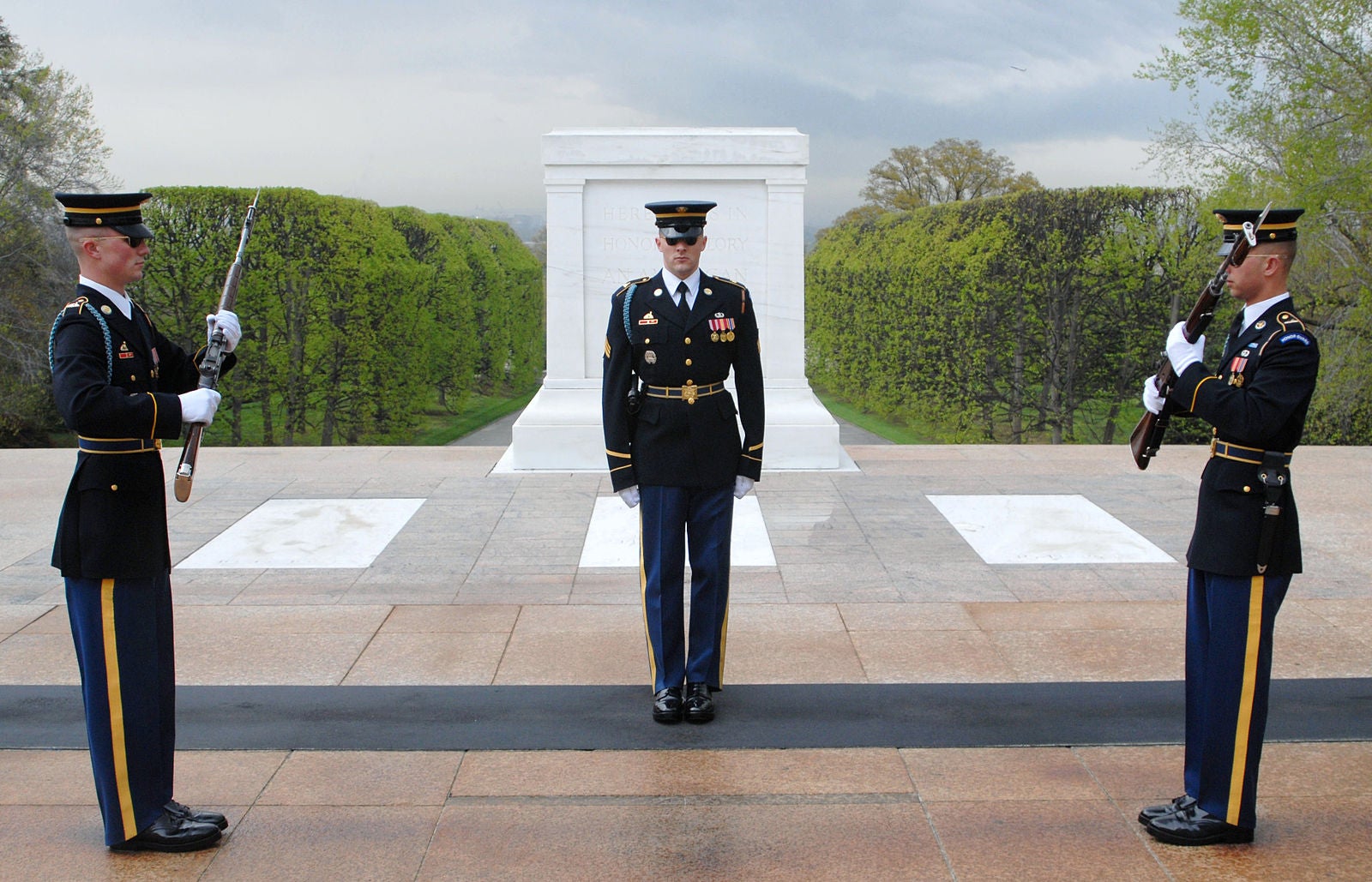 Sgt. Benton Thames, Sgt. Jeff Binek and Spc. William Johnson change the guard at the Tomb of the Unknowns. The ceremony is full of tradition and meaning. For example, sentinels take 21 steps or stand for 21 seconds—honoring the unknowns with a version of the 21-gun salute. Wikimedia Commons.

On November 11, 1921, the 10th anniversary of the armistice that ended WWI, a fallen, unknown soldier from the war was placed on a horse-drawn caisson and carried in a procession through Washington, D.C. and across the Potomac River. A funeral ceremony was held at Arlington National Cemetery before the soldier was interred in the Tomb of the Unknown Soldier. To mark the centennial of the tomb, Arlington National Cemetery invites the public to participate in a rare and exclusive event.

The Tomb of the Unknown Soldier is truly hallowed ground. As such, the Tomb Sentinels of the U.S. Army’s 3rd Infantry Regiment guard it without exception. Normally, the Tomb of the Unknown Soldier Plaza is accessible only to Sentinels and dignitaries paying their respects on official visits. However, for the tomb’s 100th anniversary, visitors will be able to walk the plaza for themselves.

On November 9 and 10, 2021, from 9:00 a.m. to 4:00 p.m., Arlington is hosting the Tomb of the Unknown Soldier Centennial Commemoration Public Flower Ceremony. During the free event, registered visitors will be allowed to personally pay their respects by laying flowers at the tomb. Visitors are encouraged to bring their own flowers, but complimentary roses, gerbera daisies, and sunflowers will be provided for free.

The flower ceremony will start on Nov. 9 at 8 a.m. with representatives from the Crow Nation placing flowers at the Tomb and reciting the prayer given 100 years ago by American-Indian Chief Plenty Coups.

Trams will shuttle visitors to the Memorial Amphitheater free of charge and historians will be on site to answer questions. The event is ADA accessible and stroller friendly. As with the guarding of the tomb, the event will take place rain or shine.

On November 10 at 4:00 p.m., the ceremony will end with the original benediction recited by the Army Chief of Chaplains, Maj. Gen. Thomas L. Solhjem. The next day, Veterans Day and the tomb’s centennial, the military will conduct a joint full honors procession to replicate the 1921 funeral procession along with a joint flyover. Members of the public are invited to observe along the procession route.

Arlington National Cemetery stresses that registration is required to partake in the flower ceremony and that all visitors must have a government issued ID for access.