WATCH: Here's what happens when you walk on the Tomb of the Unknown Soldier to get a selfie - We Are The Mighty

WATCH: Here’s what happens when you walk on the Tomb of the Unknown Soldier to get a selfie 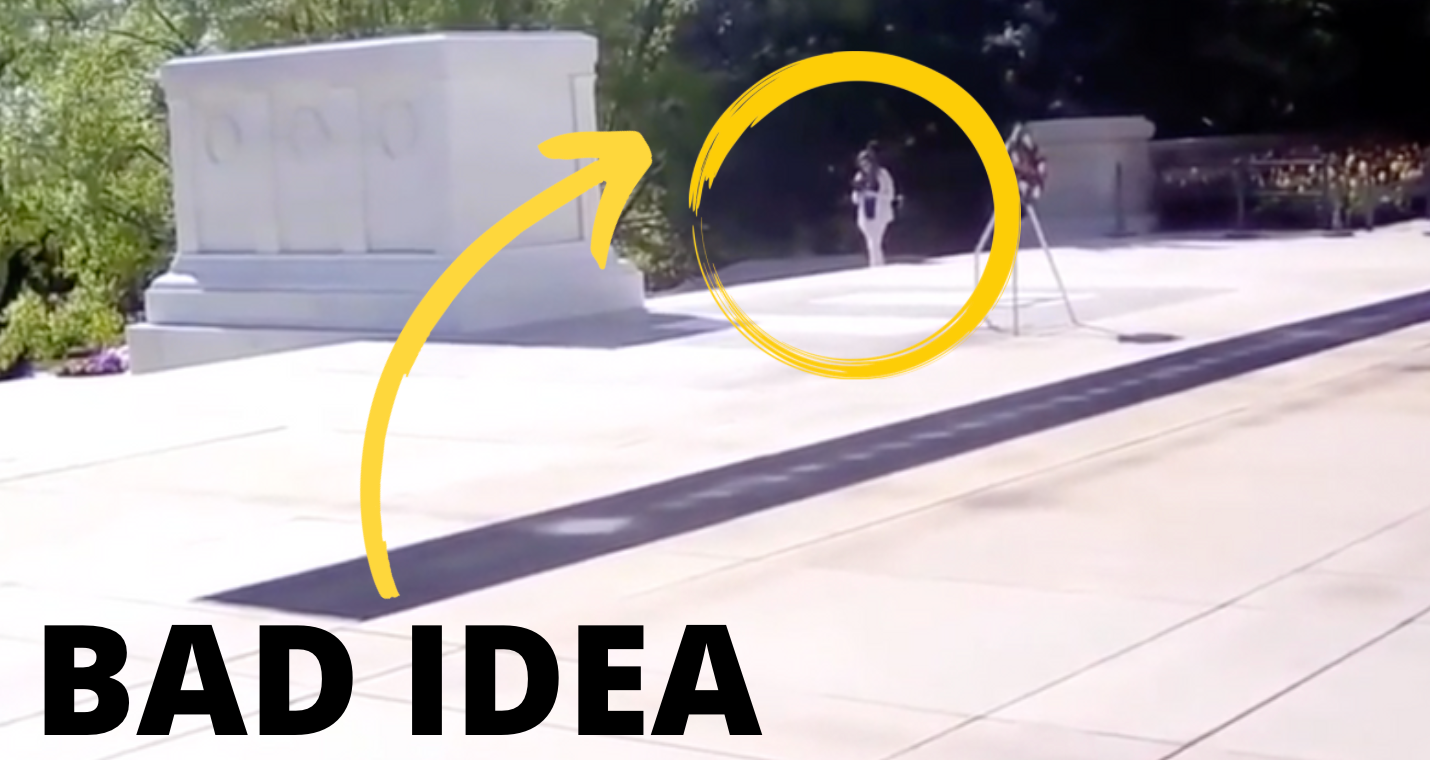 There are few things in the world so sacred they’re guarded 24/7/365 by armed sentinels. The Tomb of the Unknown Soldier at Arlington Cemetery certainly qualifies as hallowed grounds. Consequently, when a woman ignores the “Do Not Cross” signs, squeezes past the barriers and tries to get a selfie, the Sentinels act REAL QUICK to put her in her place. We’re not exactly sure when this video was taken (although the ever-reliable folks on reddit tell us this is “new video footage”) but the moral of the story is always the same: Respect the fallen. Read signs. Obey armed guards.

If you’ve never seen the changing of the Guards or visited Arlington National Cemetery, try to find a way. It’s one of life’s most humbling, incredible places. Just make sure you read the signs.

Through the ages, one of the consequences of warfare has been large numbers of unidentified dead. Sometimes unidentified remains resulted from poor record keeping, the damage that weapons of war inflicted on bodies, or the haste required to bury the dead and mark gravesites. In the United States prior to the Civil War, unidentified remains were often buried in mass graves. At Arlington National Cemetery, these include unknown soldiers and sailors from the War of 1812 who were discovered buried at the Washington Navy Yard and reburied at Arlington National Cemetery in 1905.

During the Civil War (1861-1865), high casualty rates and lack of personal identification led to large numbers of unknowns originally buried along marching routes or battlefields. The system of national cemeteries was established in 1862 to ensure the proper burial of all service members. Still, many unknown remains were recovered in the years following the Civil War. At Arlington National Cemetery, there are individual Civil War unknown burials as well as the remains of 2,111 Union and Confederate soldiers buried beneath the Tomb of the Civil War Unknowns. While exact numbers are unknown, estimates indicate that nearly half of the Civil War dead were never identified.

During the Spanish-American War (1898), the U.S. military’s policy was to repatriate (return to the United States) the bodies of service members who died abroad. New Army regulations required that soldiers be buried in temporary graves with identifying information. The Army’s Quartermaster Corps, which oversaw burials and repatriation of bodies, employed a burial corps. Identification rates went up to significantly.

World War I and the Creation of the Tomb

During World War I, U.S. service members received aluminum identification discs, the precursors to “dog tags,” to aid the process of identifying remains. The War Department created a new unit in the Quartermaster Corps, the Graves Registration Service, to oversee burials. During and after World War I, however, Americans debated whether bodies should be repatriated. With more than 100,000 U.S. casualties (compared to fewer than 3,000 in the Spanish-American War), repatriation was more challenging.

France and Great Britain, which suffered significantly higher casualties and more unknown dead than did the United States, barred repatriation of their citizens’ remains. To ease the grief of their citizens, France and Great Britain each repatriated and buried one unknown soldier on Armistice Day, November 11, 1920. Great Britain buried its Unknown Warrior inside Westminster Abbey in London, and France buried its Unknown Soldier at the base of the Arc de Triomphe in Paris. These unknowns would stand in for other British and French service members whose remains could not be identified.

The American policy, by contrast, gave options to families of the war dead. If requested by the next of kin, the remains of service members who died in Europe would be transported to anywhere in the United States at no cost to the family. Or, families could choose to bury their dead at permanent U.S. military cemeteries to be established in Europe.

In December 1920, New York Congressman and World War I veteran Hamilton Fish Jr. proposed legislation that provided for the interment of one unknown American soldier at a special tomb to be built in Arlington National Cemetery. The purpose of the legislation was “to bring home the body of an unknown American warrior who in himself represents no section, creed, or race in the late war and who typifies, moreover, the soul of America and the supreme sacrifice of her heroic dead.”

Town officials and members of the U.S. Army’s Quartermaster Corps had prepared the city hall for the selection ceremony. Early on the morning of October 24, 1921, Maj. Robert P. Harbold of the  Quartermaster Corps, aided by French and American soldiers, rearranged the caskets so that each rested on a shipping case other than the one in which it had arrived. Major Harbold then chose Sgt. Edward F. Younger of Headquarters Company, 2nd Battalion, 50th Infantry, American Forces in Germany, to select the Unknown Soldier. Sgt. Younger selected the Unknown by placing a spray of white roses on one of the caskets.

On November 11, 1921, the Unknown was placed on a horse-drawn caisson and carried in a procession through Washington, D.C. and across the Potomac River. A state funeral ceremony was held at Arlington National Cemetery’s new Memorial Amphitheater, and the Unknown was interred in the Tomb of the Unknown Soldier. Nationwide, Americans observed two minutes of silence at the beginning of the ceremony. President Warren G. Harding officiated at the ceremony and placed the Medal of Honor, the nation’s highest military decoration, on the casket. Numerous foreign dignitaries presented their nations’ highest awards, as well.

Originally, the Tomb of the Unknown Soldier consisted of a simple marble slab. During its early years, thousands of visitors came to Arlington National Cemetery to mourn at the Tomb and to pay their respects to the Unknown Soldier and the military personnel he represented.

The Tomb sarcophagus is decorated with three wreaths on each side panel (north and south). On the front (east), three figures represent Peace, Victory and Valor. The back (west) features the inscription: “Here rests in honored glory an American soldier known but to God.”

Following World War II, some Americans supported the idea of interring and honoring an Unknown from that war. However, the start of the Korean War in 1950 delayed those plans. In August 1956, President Dwight D. Eisenhower approved the selection and interment of Unknowns from both World War II and Korea.

Fought on four continents, World War II complicated the selection of an Unknown. The chosen Unknown needed to represent all unidentified American dead, not just those from one theater of the war. In 1958, the Army exhumed 13 bodies from military cemeteries across North Africa and Europe and brought them to the Epinal American Cemetery and Memorial in France. On May 12, 1958, Major General Edward J. O’Neill placed a red and white wreath on one of the 13 caskets, selecting the Unknown who would represent the Trans-Atlantic (Europe and North Africa) Theater of World War II. The selected casket was then taken aboard USS Blandy for its journey to the United States.

To represent the Pacific Theater of World War II, the Army exhumed five bodies from Fort McKinley American Cemetery in the Philippines (now called Manila American Cemetery) and the National Memorial Cemetery of the Pacific (“The Punch Bowl”) in Hawaii. At the same time, they exhumed four bodies from the Korean War that were also buried at the National Memorial Cemetery of the Pacific. All nine caskets were brought to Hickam Air Force Base, Hawaii. On May 15, 1958, Army Master Sergeant Ned Lyle selected the Korean War Unknown. The next day, Air Force Colonel Glenn T. Eagleston selected the World War II Trans-Pacific Unknown. Both caskets were flown to Guantanamo Bay, Cuba, before being loaded aboard the USS Boston.

Both Unknowns arrived in Washington, D.C. on May 28, 1958 and lay in state in the U.S. Capitol Rotunda for two days. Two days later, the Unknowns were transported to Arlington National Cemetery and interred in crypts to the west of the World War I Unknown.

Before the Vietnam War ended, Arlington National Cemetery began making preparations to add a third crypt to the Tomb. However, many people believed that advances in technology would mean that all remains from Vietnam could eventually be identified.

By May 1984, only one set of recovered American remains from Vietnam had not been fully identified. In a ceremony held at Pearl Harbor, Hawaii on May 17, 1984, Medal of Honor recipient Marine Corps Sergeant Major Allan Jay Kellogg, Jr. designated the remains as the Vietnam War Unknown. The casket was then transported to Travis Air Force Base, California aboard the USS Brewton.

The Department of Defense and civilian partners continued working to identify remains recovered from Vietnam. Through these efforts, they reviewed evidence that suggested the Vietnam War Unknown was likely Air Force 1st Lt. Michael Joseph Blassie, a pilot who had been shot down in 1972. At the request of Blassie’s family, the Department of Defense exhumed the remains from the Vietnam Unknown’s crypt on May 14, 1998. Using DNA testing, scientists positively identified the remains as those of Blassie. In accordance with the wishes of his family,

Blassie was reinterred at Jefferson Barracks National Cemetery in St. Louis, Missouri. The crypt designated for the Vietnam War Unknown remains vacant. On September 17, 1999 — National POW/MIA Recognition Day — it was rededicated to honor all missing U.S. service members from the Vietnam War.

In March 1926, soldiers from nearby Fort Myer were first assigned to guard the Tomb of the Unknown Soldier. The guards, present only during daylight hours, discouraged visitors from climbing or stepping on the Tomb. In 1937, the guards became a 24/7 presence, standing watch over the Unknown Soldier at all times.

The 3rd U.S. Infantry Regiment, known as “The Old Guard,” was designated as the Army’s official ceremonial unit on April 6, 1948. At that time, The Old Guard began guarding the Tomb of the Unknown Soldier. Soldiers of The Old Guard also serve as escorts to the president and conduct military ceremonies in and around Washington, D.C., including military funeral escorts at Arlington National Cemetery.

Soldiers who volunteer to become Tomb Guards must undergo a strict selection process and intensive training. Each element of the Tomb Guard’s routine has meaning. The Guard marches 21 steps down the black mat behind the Tomb, turns and faces east for 21 seconds, turns and faces north for 21 seconds, and then takes 21 steps down the mat. Next, the Guard executes a sharp “shoulder-arms” movement to place his/her weapon on the shoulder closest to the visitors, signifying that he or she stands between the Tomb and any possible threat. The number 21 symbolizes the highest symbolic military honor that can be bestowed: the 21-gun salute.

Laying a wreath at the Tomb of the Unknown Soldier has long been a way for individuals and organizations to honor the sacrifices of American service members. Presidents, politicians, public figures and foreign dignitaries have all paid their respects in this way. Honor Flights, which honor our nation’s veterans with all-expense paid trips to see the memorials in Washington, D.C., almost always visit the Tomb of the Unknown Soldier and sometimes lay wreaths. The opportunity to participate in a wreath-laying ceremony is also open to the general public, including school groups. In addition, each year, millions of people from around the world visit the Tomb of the Unknown Soldier. Some visit to honor military service and sacrifice; some to mourn a loved one; and some because of the Tomb’s historical and national significance.

One hundred years after the World War I Unknown’s burial, the Tomb of the Unknown Soldier continues to be a powerful symbol of service and sacrifice, mourning and memory.