How a fighter jet managed to shoot itself down 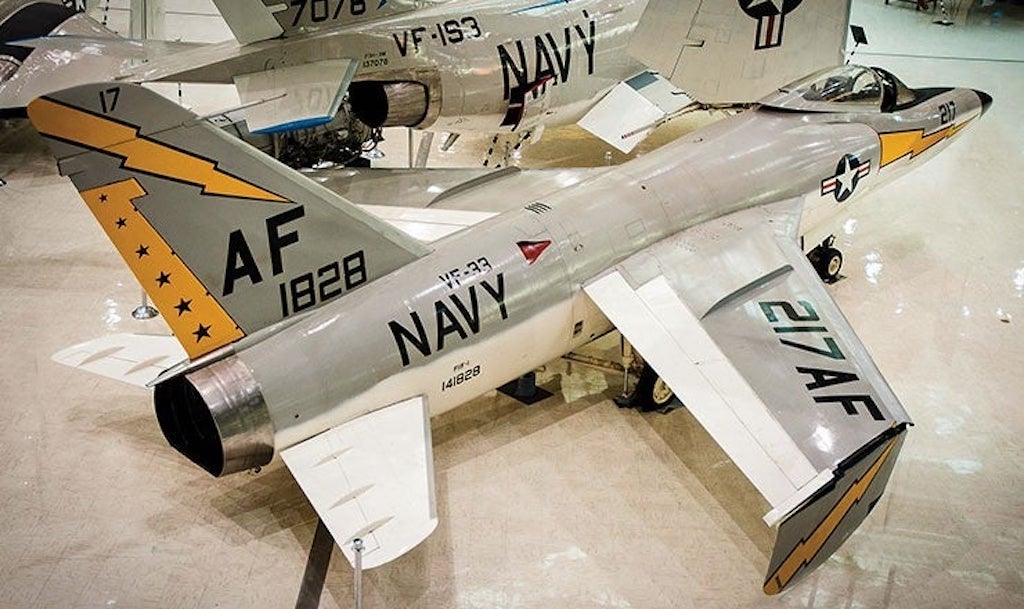 The F-11F Tiger was a supersonic fighter designed for the Navy, first produced in 1954 and first tried on a carrier in 1956. At the time, supersonic flight was not a new concept. Air Force test pilot Charles “Chuck” Yeager had broken the sound barrier in 1947 and new supersonic planes were rolling off of assembly lines.

This new design used spoilers to control the plane’s roll and had improved low-velocity maneuverability.  Most importantly for the U.S. Navy, those new wings folded up for easier storage aboard American aircraft carriers. The result was a supersonic fighter capable of 10,500 pounds of thrust and a speed of Mach 1.1. One more critical element remained: its armament.

On Sept. 21, 1956 test pilot Tom Attridge took to the skies behind the stick of an F-11F to run some tests for Grumman on the plane’s weapons capabilities. He climbed to 20,000 feet, dropped down to 13,000 feet and test fired all four cannons in two, four-second bursts. His guns were emptied.

After the first burst, he switched to afterburners before firing the second volley. Suddenly, the Tiger rattled as if it had been hit by a bird. He had to slow the plane’s speed to 230 miles per hour after his canopy and the right engine showed apparent damage. His plane was suddenly only at 78% power. The engine began to sound like it was “tearing up.”

Then, he lost power entirely, just two miles from his Long Island home base. As he attempted to make for the runway, the plane caught fire, lost a wing and a stabilizer, and Attridge had to abandon the plane. He survived the ejection.

Upon closer examination, Grumman engineers found three damage points in the F-11F Tiger. Attridge manages to hit his own plane in the canopy glass, right engine, and nose cone. They even found a 20-millimeter bullet lodged in the engine’s compressor.

Attridge managed to shoot himself down because the projectiles’ velocity and altitude drops coincided with the aircraft’s descent and downward pitch. When he dove down at .5-G, he put himself below the bullets’ trajectories. It took only 11 seconds to catch up to his own bullets.

Luckily for Attridge, the plane was loaded with dummy practice rounds, straight metal slugs that did not explode on impact with the target, like the kind used in air-to-air combat. If they had been using real ammunition, it’s unlikely the pilot would have survived either the hit to the canopy glass or the hit to the plane’s engine.

If Attridge had not dived down as steep as he did, the bullets would have missed his plane entirely. It was the air resistance that slowed the bullets down to the point where they could hit the F-11F.

The Navy called it a “million to one shot,” but advised that the increasing speed of jet aircraft could make it likely the event would happen again one day – and it did. In 1973, an AIM-7 Sparrow missile caught the end of an F-14 Tomcat’s fuel tank and took down that plane. Those pilots also survived.