Gold Star families are on the frontlines in Ukraine ... here's how to help them - We Are The Mighty 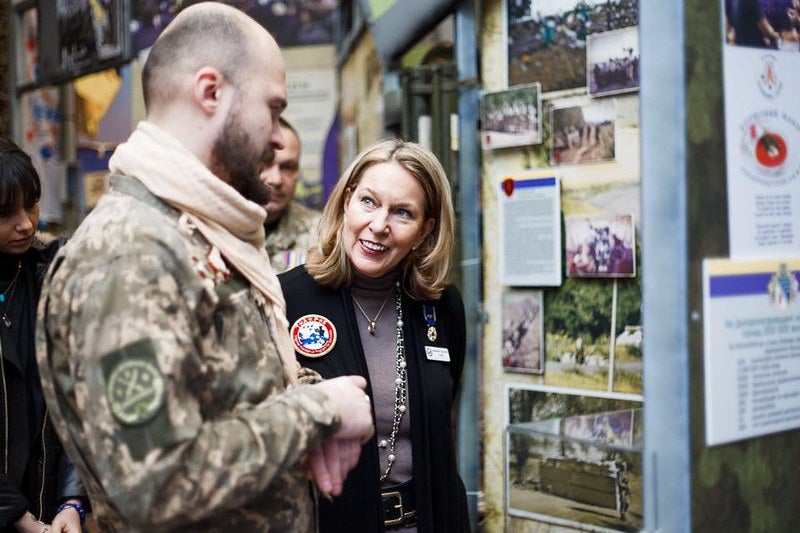 The Tragedy Assistance Program for Survivors was founded in the wake of a 1992 Army C-12 plane crash in Alaska. Eight soldiers were killed including Brigadier General Tom Carroll, Commanding General of the Alaska Army National Guard. His widow, Bonnie Carroll, found that there was no national emotional support network for the families of fallen service members to help her and the other family members. Undeterred, she sought to create such a network.

After two years of research on resources and best practices to support grieving families, Carroll founded TAPS in 1994. Since then, TAPS has grown into a well-established and trusted nonprofit that works closely with the DOD to support the families of America’s fallen heroes. In 2015, Carroll was awarded the Presidential Medal of Freedom by President Obama for her incredible work which she accepted on behalf of the entire TAPS family. The organization has also expanded to the international stage with delegations from 33 foreign countries including Afghanistan, Iraq and Ukraine.

In 2015, the US Department of State approached TAPS to assist Ukraine in developing a program to support the families of its fallen military. Conflict with Russian-backed separatists erupted in the Donbas Region of Ukraine the year prior. Since then, the fighting has resulted in the deaths of over 14,000 Ukrainians with a further 1.2 million displaced.

Following the organization’s proven peer-based model of care, TAPS Ukraine was founded in 2018. Based in the eastern city of Dnipro and funded entirely by donations, the organization has helped thousands of Ukrainians grieving the loss of their military loved ones through seminars and retreats, providing resources and information on grief and trauma, and connecting them with professional counseling. However, after Russia’s open attack on Ukraine in February 2022, TAPS Ukraine has had to expand its operations.

Immediately following the invasion, members of TAPS Ukraine joined with other volunteer organizations and concerned citizens, including city council members and the mayor of Dnipro, to create the Coordination Headquarters of Dnipro Volunteers. “It’s such an extraordinary circumstance where we have recently bereaved military survivors, the women and families who are part of TAPS Ukraine, who are now responding on the frontlines of Ukraine in Dnipro,” Carroll said. Together, the volunteers provide for the needs of the Ukrainian military, Territorial Defense, National Guard and National Police, as well as internally displaced persons fleeing the fighting. Currently, they serve meals to between 5,000 and 10,000 servicemen and 5,000 IDPs daily. Additionally, they are coordinating the distribution of tactical equipment like helmets and body armor to Territorial Defenders.

However, with the fight for their country’s survival on their doorstep, the Coordination Headquarters of Dnipro Volunteers is doing more than serving food and handing out gear. They are actively evacuating civilians from Kharkiv to Dnipro, providing childcare, organizing dental care for service members, and even facilitating emergency psychological assistance. In between all of this, volunteers are also reinforcing and securing checkpoints, searching for missing persons and prisoners, and building Molotov Cocktails.

For the surviving military family members of TAPS Ukraine, their work on the frontlines is nothing new. “This is their second time around doing this,” said TAPS International Senior Advisor Kyle Harper. “Since the fighting in the Donbas Region in 2014, Dnipro has been the main source of folks going to the conflict. Ordinary Ukrainians were the ones who went down to the front. People brought their own rifles and handguns and went to fight.” The city also facilitated military supply and troop movements and served as a field hospital, all of which it is doing again. As Dnipro is bombed, TAPS Ukraine and other defenders rally to defend their city and country.

“They have already lost everything,” Carroll said, noting the resolve of the TAPS Ukraine military survivors, “and now they are going to do everything they can to protect their homeland.” These war widows and citizen defenders are using all of their available resources to combat the Russian invasion and TAPS International is helping to support them. With vital supplies like food, medicine, and first aid kits being expended at extraordinary rates, funds are being transmitted directly to TAPS Ukraine to purchase these items. Donations can be made to TAPS International to support the steadfast work of TAPS Ukraine. The organization also shares updates on their Facebook page. For the defenders in Ukraine, international support like this is invaluable both physically and psychologically knowing that they are not alone in their fight.