How Russia guaranteed a Union victory in the Civil War 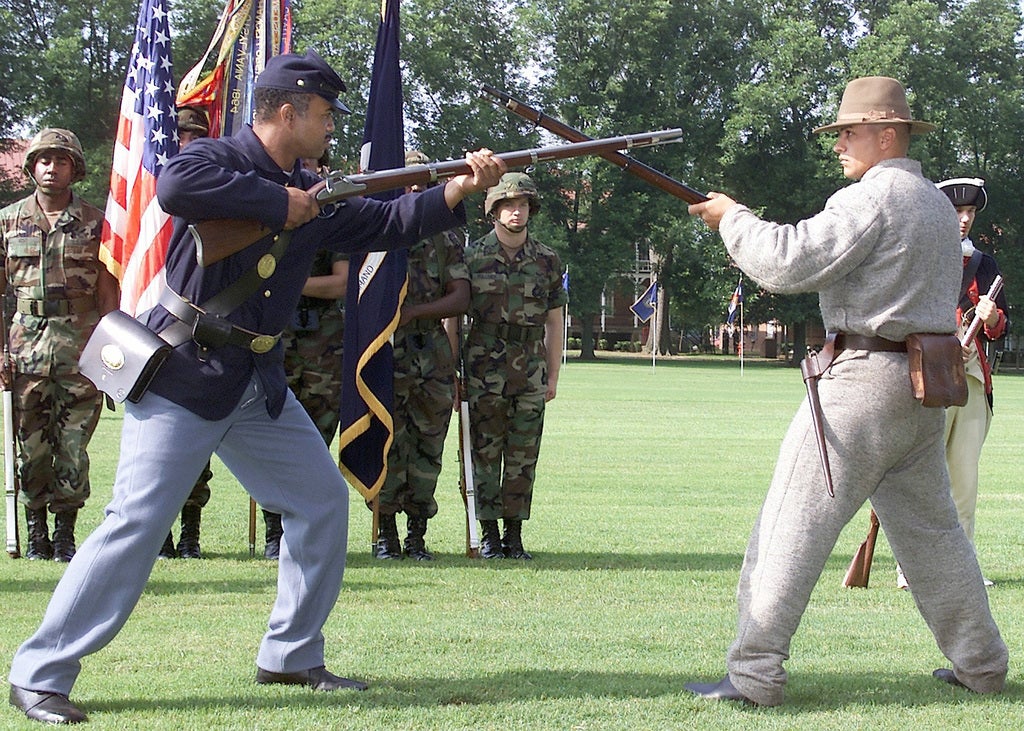 Dressed in the uniform of the Union Army and the Confederate Army, two Re-enactors, armed with musket rifles, perform a re-enactment of a standoff during the Civil War. A Living History Pageant was the center of the Army's 226th Birthday Celebration at Fort McPherson, GA.

It’s hard to determine which is more surprising: the British aching to send troops and materiel to aid the Confederacy during the Civil War or that the first “Special Relationship” was between the U.S. and Russia against the British. Both of these facts are true and for the latter negating the former, we can thank one Cassius Marcellus Clay.

Clay was more than just a namesake for the greatest boxer of all time. He was also a politician, representative, officer in the Mexican War and Civil War, abolitionist, and ambassador with a pedigree in badassery. This man once frightened an opponent so much that the man killed himself the night before they were supposed to duel, which is probably the only duel story to top Andrew Jackson’s.

When Abraham Lincoln was elected President in 1860, he tapped Clay to be his ambassador to the Imperial Russian Court in St. Petersburg. Since the Civil War broke out before Clay left for Russia in 1861 and there were no Federal troops in Washington at the time, Clay raised an Army of 300 volunteers to maintain an active defense of the capital until troops arrived.

The Kentucky politician started his life born to a family of planters (who fought in both the Revolution and the War of 1812) and became one himself before his foray into politics. Despite being a wealthy planter from Kentucky, the Yale-educated Clay became a staunch Abolitionist, opposed to slavery in any form, which would eventually cost him his seat in the legislature.

He started an anti-slavery newspaper called True American which immediately earned him death threats. He was threatened so often and he was so steadfast in his beliefs, he had to seal himself and his press in his office in Lexington, defending the building with two four-pounder cannons.

While giving a speech promoting the abolition of slavery, he was attacked by six brothers for expressing these views. They beat him, stabbed him, and tried to shoot him, but Clay fought off all six with his Bowie knife, killing one of them in the process.

Clay was so infuriating to his pro-slavery opponents, they hired a political gun to assassinate him. The would-be assassin shot Clay in the chest, but the bullet didn’t kill him. Despite being restrained by the assassin’s friends, Clay drew his Bowie knife and cut off the man’s nose and left ear, then gouged out his eye before throwing him over a wall and into a nearby river.

The Russian-British rivalry raged during the American Civil War. British politicians openly advocated intervention in the war and even had a secret plan to burn Boston and New York in sneak attacks from Canada. E. D. Adams’ Great Britain and the American Civil War notes the U.S. considered Russia a “true friend” and was suspicious of British neutrality while Secretary of State William Seward actively advocated war with France.

While in St. Petersburg, Clay won the support of Russia for the Union cause and convinced Tsar Alexander II to threaten worldwide war with England and France to keep them from intervening on the side of the Confederacy, with whom they both sympathized. The Russian Baltic Fleet arrived in New York harbor in in September 1863 and the Russian Far East Fleet arrived in San Francisco that October. The Tsar ordered his Navy to be under Lincoln’s command if war broke out.

Clay was recalled by Lincoln in 1862 and commissioned a Major General in the Union Army. He refused to accept the commission unless Lincoln freed slaves under Confederate control. The President ordered him to Kentucky to assess the effect of Emancipation on the population there, as Kentucky was seen as a vital border state. When Clay returned, Lincoln issued the Emancipation Proclamation. He left for Russia again the next year and served there until 1869, where he helped secure the Purchase of Alaska, presumably because the Tsar was afraid of him.

In his later years, Clay had so many enemies, he kept cannons to defend his home and office. His daughters became staunch Women’s Rights advocates.