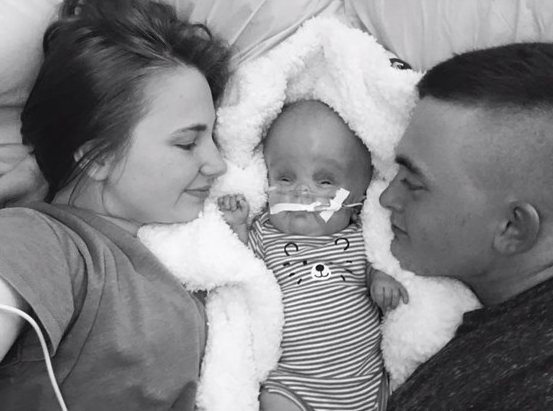 A military family had their U-Haul stolen in Georgia during their PCS to Louisiana. Inside the moving van was their infant son’s ashes.

Benjamin and Kassandra Benton were high school sweethearts. When Kassandra found out she was pregnant with baby Wyatt, she didn’t believe the doctor — she was a Neuroblastoma cancer survivor at just seven years old and her entire abdomen was “nuked,” as she called it. “Some people may remember me from Extreme Home Makeover; I’m the one who made necklaces to raise money for kids with cancer,” she shared.

But she was pregnant and 14 weeks along. Kassandra was considered high risk and went into labor at home unexpectedly at just 24 weeks. Ben delivered baby Wyatt who wasn’t breathing while Kassandra continued to hemorrhage. EMS personnel rushed them to the hospital where they were both saved. But they’d spend five months watching Wyatt fight for his life.

Ben headed to Air Force basic training not long after Wyatt’s birth. Kassandra kept him up to date through letters. “Some of the bad things I’d leave out scared that Ben would get discouraged and drop out. It was hard,” she said.

Eventually, she had to call him to come home. Wyatt’s brain shunt was overrun with infection and there was nothing more they could do. “We decided instead of Wyatt living his whole life in the hospital, we’d take him into hospice where he could see the outside … where we could cuddle and enjoy his last days,” Kassandra explained.

“We held him. We loved him and we made sure he felt that. He was our world and he still is. Because of Wyatt I have my two beautiful daughters,” Kassandra said. She went into labor early with both girls but because of her experience with Wyatt, she recognized the signs and got to the hospital early. Charlotte and Amelia are here because of him, Kassandra said.

The young family was on their way to Ben’s new duty station at Barksdale Air Force Base when they stopped at a motel in Georgia for the night. When they awoke, their U-Haul was gone. Although it was found days later, it was empty except for a few bags of clothes. Wyatt’s ashes, hand and footprints and hand mold were still gone. It was all they had left of him.

A local nonprofit near Barksdale Air Force Base has stepped forward to help. EveryWarrior is offering a $3,000 reward through the Covington, Georgia Police Department for the return of Wyatt’s remains. The military spouses at the base have also rallied behind the Benton family, establishing a GoFundMe page to support their needs.

In the end though, they just want Wyatt’s remains returned safely and don’t care about the rest of their stolen things. Kassandra has pleaded through every media interview for the person who took his ashes to please “have heart” and bring him home. For the Benton family, it feels like they are mourning his loss all over again.

In a Facebook post on March 6, 2021 she pleaded once again. “Keep sharing, keep looking, and keep the hope. I believe, I have to believe Wyatt will find his way back to me. It’s the only thing keeping me going. And a THANK YOU! To everyone who is helping us on this search, and who’s donated for my family, and who is praying for us. You are our village…”

If you have information about Wyatt’s stolen remains, please contact the Covington Police Department at 770-786-7605.