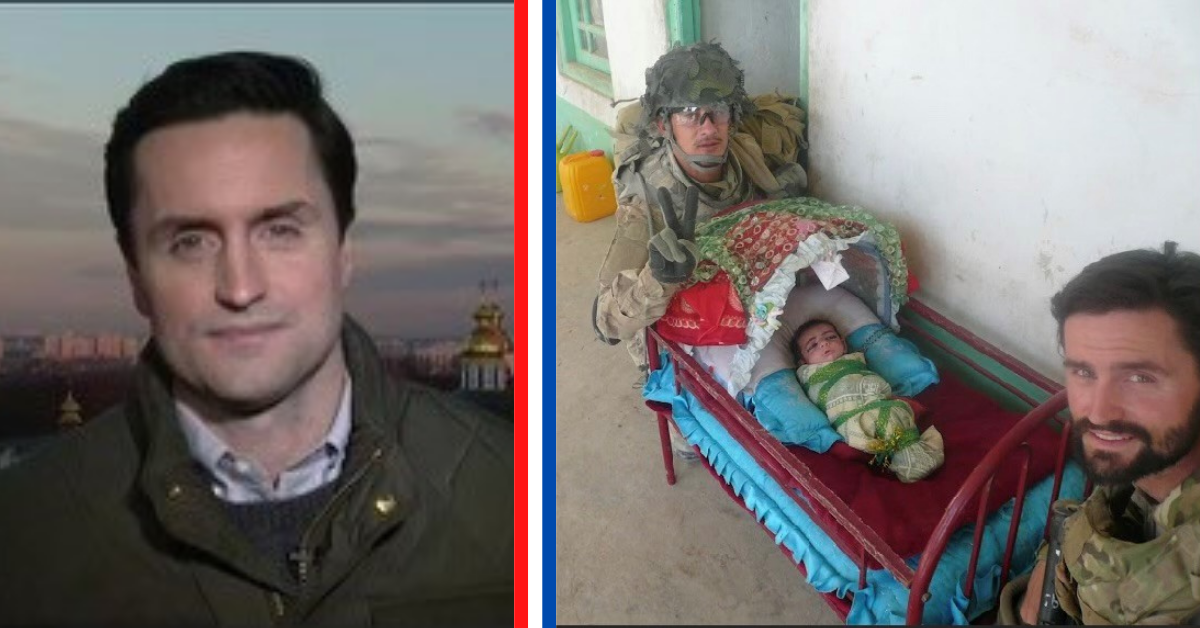 Lucas Tomlinson is a familiar face as a correspondent for FOX News. But long before he found himself on the ground during a Russian attack on Ukraine, he was a Naval officer.

Growing up in Chappaqua, New York, Tomlinson had a deep-rooted passion for service and giving back that began with his family. His uncle was a fighter pilot during the Vietnam War; it was those stories and seeing his old uniforms which would leave a lasting impression.

“I always found myself being drawn to jets and warships like most young boys,” he laughed. “Then I visited the Naval Academy and just knew that was it for me.”

Tomlinson began his journey as a sailor in 1997 and graduated from the Naval Academy in May of 2001, just before the attacks on 9/11. Tomlinson was working through Navy Dive School at the time and found himself assigned to the USS McInerney.

“I ended up doing a couple years on the warship as a Surface Warfare Officer, deploying twice to the Caribbean and South America doing counter-drug operations. We also went to Europe, the Baltics in the Mediterranean,” he shared.

After his time on the ship he taught at the Naval Academy before leaving the service to work for the Department of Defense. “I ended up going to Afghanistan for almost a year, working with the 3rd Brigade Combat Team, 10th Mountain Division on a Human Terrain team. It was an incredible experience,” Tomlinson said.

He spent much of his time on the ground, interviewing locals with an interpreter and writing reports on the locals to better understand the population. It was vital research and data for the Armed Forces missions on the ground and it was his time there which would lead to his career in journalism and eventual role with FOX News in 2012. For years he worked as a producer from the Pentagon until receiving his current correspondent position in January of 2022, never dreaming he’d be sent back into a war zone.

But when he received the assignment call, it was an immediate yes.

Weeks before the Russian invasion of Ukraine, Tomlinson was there. “Most people [Ukrainians] were dismissive of the warnings of Russia attacking. I remember at one point during breakfast, somebody at the hotel offered champagne and my colleague turned to me and said, ‘Yeah, they were serving that on the Titanic as well.'”

Just three weeks later on February 24, 2022, Russia advanced and began a full-scale invasion of Ukraine. FOX News lost two of its own in attacks and one of its reporters was seriously wounded before being rescued by Save Our Allies.

Embedded reporters with the United States military have access to medivacs in the event of an emergency. Reporters working alongside the Ukraine military do not. “This is down and dirty fighting. Certainly, as a journalist, there’s incredible risks. Just knowing that journalists are getting killed, they have been killed. It’s just a tough situation,” Tomlinson said. “But it’s a critically important vocation right now, think about where we’d be if we did not have images of the destruction of Ukraine.”

Russia has blocked its citizens from accessing Facebook and Instagram and those in control have spent years eliminating free media. “It’s an information war as well as a real war. If it wasn’t for undeniable video evidence a lot of people would dismiss what’s happening,” Tomlinson added.

At this time, all broadcast media is now controlled by the Russian government. The messaging of Ukrianians being Nazi’s and Russians being in danger from NATO fill the airwaves, convincing many.

“You see cities being destroyed, torn apart, thousands killed and children being made into orphans. That’s what I saw. Being a father I think had more of a profound impact on my reporting,” Tomlinson said. “There’s been some incredible reporters out there documenting this, not just at FOX. You see these photos of women and children putting their hands on the glass at the train station saying goodbye. It’s tough to witness.”

Though difficult to report on, he’s adamant his time in the military prepared him for his role as a journalist and for his recent time spent in war-torn Ukraine. “As a veteran you know how to work under pressure and it’s a tremendous skill,” he said.

The images and stories from his six weeks on the ground will be with him forever, Tomlinson admitted. But, he’d do it all again.

“It’s so important as a journalist for me personally to have been on the ground in Ukraine. It’s like mapping Human Terrain in Afghanistan,” he said. “It is so important to report on what people, the common man, the common woman, in some cases, the child is thinking, feeling and saying and it’s very important to make their voices heard around the world.”