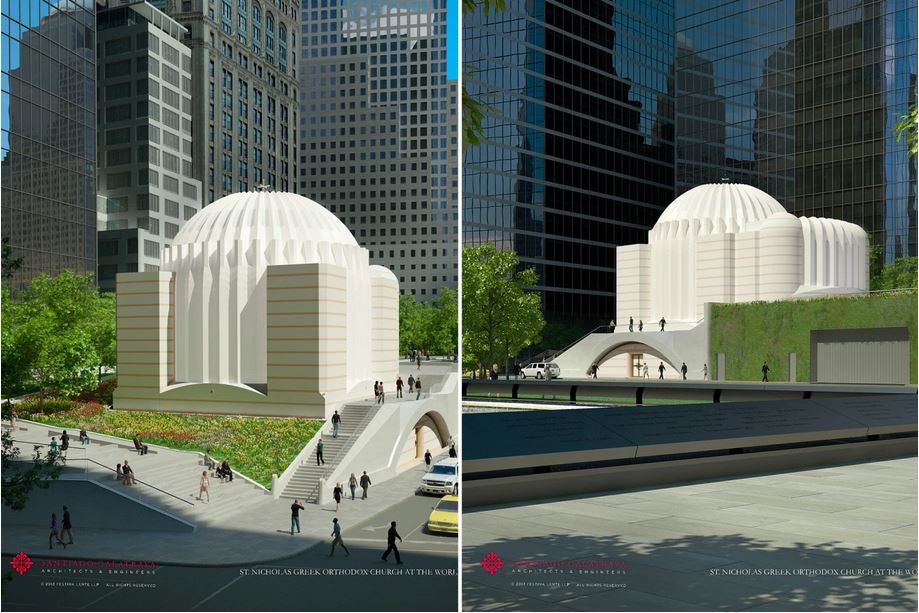 St. Nicholas Greek Orthodox Church stood for nearly a century at 155 Cedar St. in lower Manhattan. It started in a small row house that was previously a tavern. Over the decades, the row houses that surrounded the church became high rises. Although developers attempted to acquire the church property for years, it was never sold. Surrounded by a parking lot and ever-climbing skyscrapers, the small church stood out in the evolving neighborhood.

In the 1960s, the World Trade Center was built, along with its iconic Twin Towers. As the area continued to sprawl with new buildings, the church remained a place of refuge from the hustle and bustle of the city, welcoming people of all faiths. “It was a little church on a lonely parking lot, and it was always open,” Rev. Alex Karloutsos, vicar general of the Greek Orthodox Archdiocese of America, told PBS. “People found it like an oasis.” Sadly, the peaceful church was destroyed on September 11, 2001.

When the Twin Towers fell, so too did St. Nicholas. The small church, which sat in the shadow of the skyscrapers, was buried under the falling rubble. It was the only place of worship destroyed during the attacks on 9/11. However, 20 years later, St. Nicholas returns to lower Manhattan.

On the same site where the original church stood, St. Nicholas Greek Orthodox Church and National Shrine at the World Trade Center is being built. The new church not only offers a place of worship for Orthodox Christians, but also a shrine to the victims of 9/11. In addition to the traditional house of worship, the building will also house a non-denominational, ecumenical remembrance room. The majority of the church’s exterior will be finished for the 20th anniversary of the attacks on September 11, 2021.

The standout feature of the new church is its illumination. Architect Santiago Calatrava placed over 1,000 LED lights inside the domed building to serve as a beacon of peace and remembrance in lower Manhattan. On September 10, 2021, the church will be illuminated for the first time. “We will turn on the lights of the church from within and the church will glow to the world,” Archbishop Elpidophoros of America, the Archbishop of the Greek Orthodox Archdiocese of America, said to PBS.

The interior lighting will be magnified by the Pentelic marble that covers the exterior of the church. The brilliant white marble is the same type used in much of ancient Greece’s art and architecture, including the iconic Parthenon. However, the new St. Nicholas church and shrine will also incorporate modern visuals with its traditional design.

Orthodox churches often feature colorful images depicting Biblical scenes, prophets, and saints. “According to the tradition that we have in our church, all senses have to participate in prayer,” said Archbishop Elpidophoros of America. “The visual part of prayer is the icon. And the icon helps the faithful to focus on prayer when they are in the church.” One such icon is the resurrection which depicts Christ lifting Adam and Eve up from Hades. In the St. Nicholas version of the icon, Adam and Eve will be joined by police, firefighters, and other first responders who perished on 9/11.

Another icon that will be modified is the Virgin Mary and the Christ child which is usually shown in the apse, the area of the church behind the altar table. In St. Nicholas, the icon will also depict the New York skyline, the Statue of Liberty, the Verrazano-Narrows and Brooklyn Bridges, and Ellis Island—the first stop for many Greek immigrants who came to the United States.

The construction of the interior of St. Nicholas will continue into 2022. However, it is scheduled for completion in time for Orthodox Holy Week, the week leading up to Easter, in April. The consecration of the church is set to follow on the 4th of July. “We were immersed in this great darkness and feeling the great pain and the great loss,” Karloutsos said. “That’s why for me personally, seeing now this church—that will be like a candle lighting up and giving hope to so many.”