Beloved former Secretary of State, General Colin Powell dies at 84 - We Are The Mighty 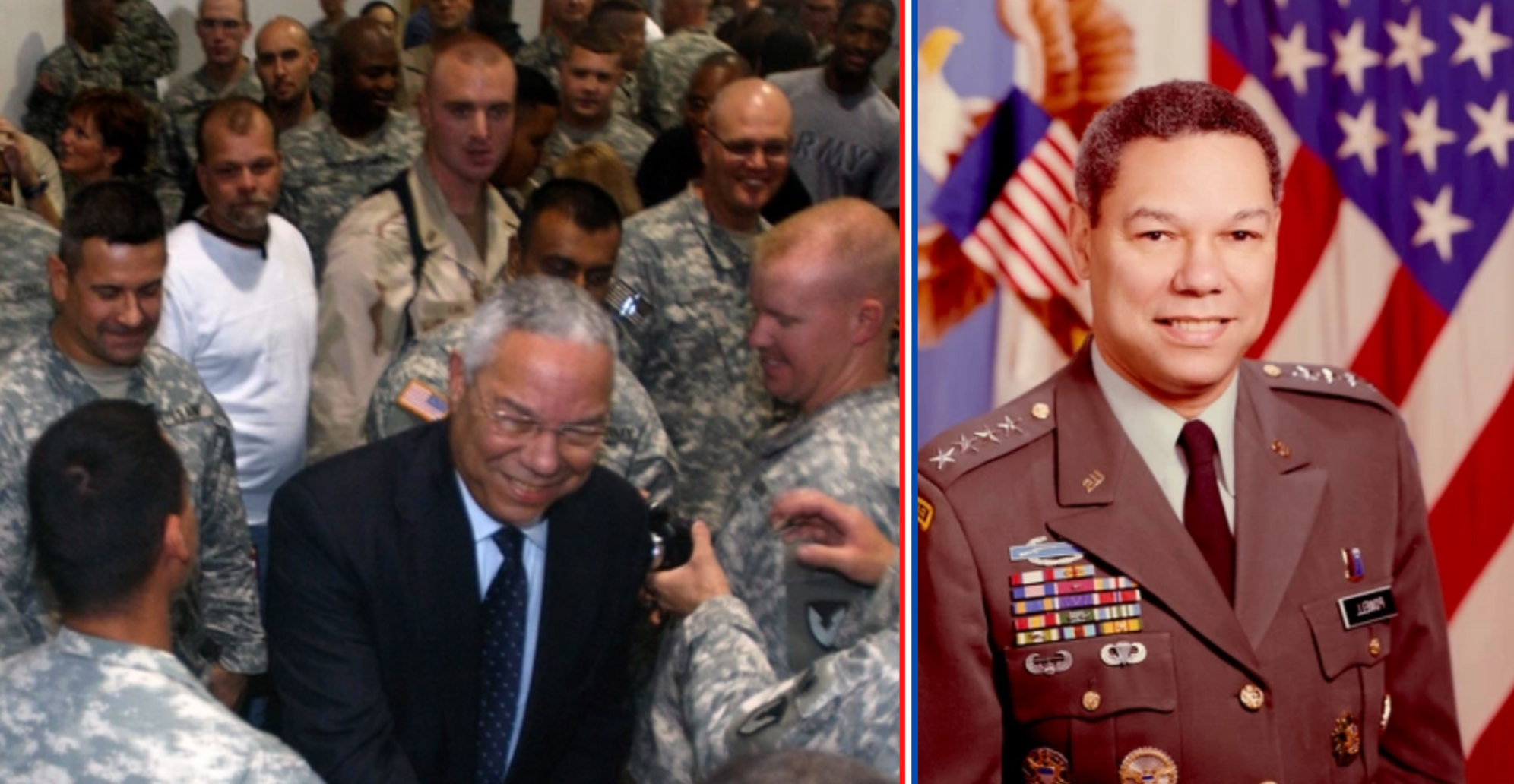 Colin Luther Powell embodied the American dream. The son of Jamaican immigrants, Powell was born in New York City on April 5, 1937. He served 35 years in the Army, rising to the highest rank in the military, and advised four presidents. On October 18, 2021, Powell, who was being treated for blood cancer, passed away from complications of COVID-19.

Powell was raised in South Bronx and attended New York public schools. He went on to earn a bachelor’s degree in geology from the City College of New York. While at CCNY, Powell joined the school’s Army ROTC program and earned a commission as a 2nd Lieutenant upon his graduation. Although he described himself as a “C average student” to the Washington Examiner, Powell recalled his ROTC experience as one of the happiest of his life.

“It was only once I was in college, about six months into college when I found something that I liked, and that was ROTC, Reserve Officer Training Corps in the military,” Powell told the Academy of Achievement. “And I not only liked it, but I was pretty good at it. That’s what you really have to look for in life, something that you like, and something that you think you’re pretty good at. And if you can put those two things together, then you’re on the right track, and just drive on.”

As a cadet, Powell joined the Pershing Rifles, the ROTC fraternal organization and drill team started by General John “Blackjack” Pershing. When he rose to the rank of general himself, Powell reportedly kept a pen set on his desk that he won during a drill competition with the Pershing Rifles.

Powell was commissioned into a newly desegregated Army and underwent an integrated basic officer training at Fort Benning, Georgia. There, he was refused service in bars and restaurants as a Black man. Following his training, Powell served as a platoon leader with the 48th Infantry in West Germany.

Later, as a captain, Powell served his first tour in Vietnam as an advisor to the Army of the Republic of Vietnam from 1962 to 1963. However, his tour was cut short when he stepped on a punji stick during a patrol. The booby trap left him with an infection that restricted his ability to walk.

Powell returned to Vietnam as a major in 1968. During this tour, he served as the Assistant Chief of Staff for the 23rd (Americal) Infantry Division. He survived a helicopter crash from which he single-handedly rescued three other soldiers including Division Commander Major General Charles M. Gettys from the wreck. Powell was awarded the Soldier’s Medal for his actions.

In 1971, Powell returned from Vietnam and earned a Master of Business Administration from Georgetown University. He also served a White House Fellowship during the Nixon administration from 1972 to 1973. From 1975 to 1976, Powell attended the National War College in D.C. Afterwards, he commanded the 2nd Brigade of the 101st Airborne Division from 1976 to 1977.

After serving at Fort Carson, Colorado, Powell returned to Washington to serve as the senior military assistant to Secretary of Defense Caspar Weinberger. In this position, Powell advised on the 1983 invasion of Grenada and the 1986 airstrike on Libya. In 1986, Powell left Washington and took command of V Corps in Germany. After one year, he returned to Washington again to serve as the Deputy National Security Advisor. Following the Iran-Contra scandal, at the age of 49, Powell became the National Security Advisor to President Reagan from 1987 to 1989. During this time, he helped to negotiate multiple arms treaties with the Soviet Union.

In April 1989, Powell was promoted to four-star General and briefly served as the Commander in Chief, Forces Command (FORSCOM). He became the third general since WWII to reach the four-star rank without serving as a division commander. Later that year, President George H. W. Bush selected Powell as the 12th Chairman of the Joint Chiefs of Staff.

Powell took the position, his final military assignment, on October 1, 1989. At the age of 52, he became the youngest and the first Afro-Caribbean American to hold the position. He was also the first Chairman to commission through ROTC rather than one of the service academies.

During his time as JCS Chair, Powell oversaw the military response to 28 crises including the 1989 invasion of Panama and the 1991 Persian Gulf War. Throughout these events, Powell advocated strongly for diplomacy and containment, rarely proposing military intervention as an initial solution. For this, Powell earned the nickname “the reluctant warrior.”

Powell reportedly clashed with Secretary of Defense Leslie Aspin under the Clinton Administration. During a lunch meeting, Powell recalled that Aspin was more interested in his salad than he was in Powell’s presentation on preparations for Operation Gothic Serpent. He implored Aspin to reinforce Task Force Ranger in Mogadishu with tanks, armored vehicles and AC-130 gunships, but was ignored. Irritated, Powell resigned early on September 30, 1993. As fate would have it, the tragic events of the Battle of Mogadishu took place just a few days later.

In 2001, under President George W. Bush, Powell was unanimously confirmed by the Senate as the Secretary of State. He was the first African American to hold the position. In fact, until President Obama’s election, Powell was the highest-ranking African American in the history of the federal executive branch.

Following the attacks on 9/11, Powell was critical in maintaining relationships with foreign countries to secure a stable coalition in the War on Terror. On November 15, 2004, shortly after President Bush’s reelection, Powell announced his resignation.

Although he retired from public service, Powell continued to speak publicly. He criticized the government’s response to Hurricane Katrina and supported moderate Republicans in their criticism of abuses committed by the intelligence community in the name of fighting terror.

Powell also encouraged the next generation to embrace new technologies and leverage them in the future. “That’s your generation…a generation that is hard-wired digital, a generation that understands the power of the information revolution and how it is transforming the world,” he said in a speech at the Center for Strategic and International Studies. “A generation that you represent, and you’re coming together to share; to debate; to decide; to connect with each other.

During his lifetime of public service, Powell earned a plethora of awards and decorations including the Presidential Medal of Freedom, The NAACP’s Springarn Medal, the Congressional Gold Medal, the French Legion of Honor Grand Cross, and was even made an Honorary Knight Commander of the Order of the Bath (United Kingdom). Despite his passing, his accomplishments continue to serve as an inspiration for military and civilian leaders from all walks of life. When in doubt, remember General Powell’s number one rule of leadership: It ain’t as bad as you think. It will look better in the morning.