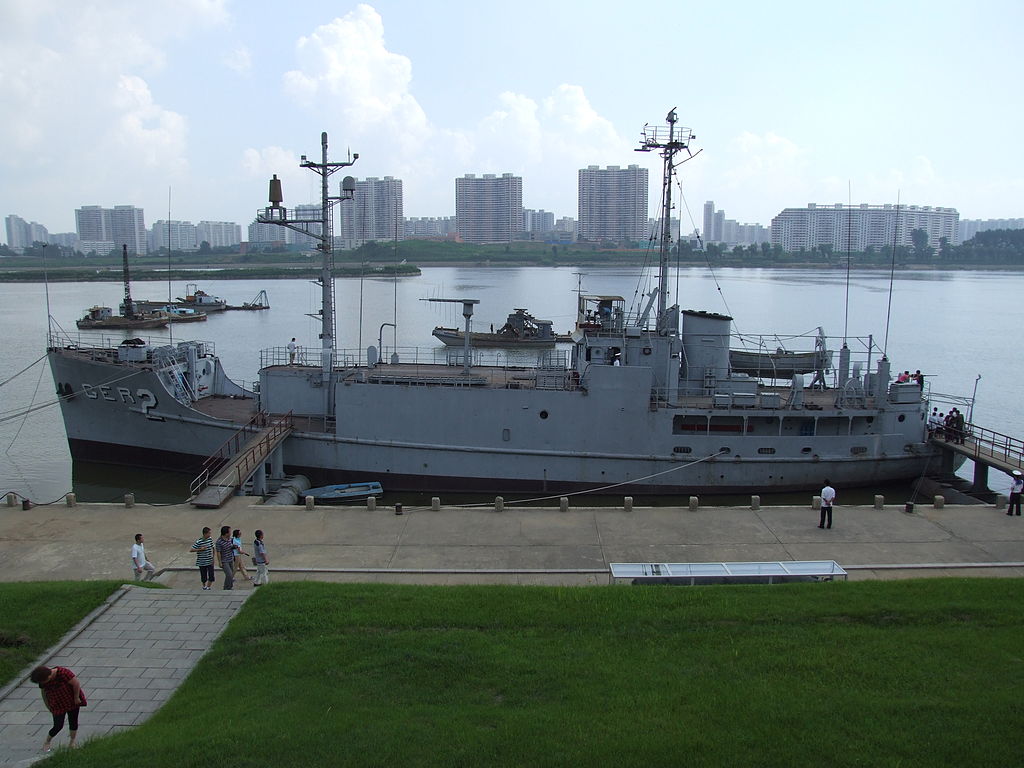 In January 1968 the USS Pueblo, a research ship being used by U.S. Navy intelligence, was captured off the coast of North Korea by the North Koreans. The North Koreans claimed the ship was in its territorial waters and viciously attacked it, killing one of the sailors aboard.

The United States says the ship was in international waters and the capture of the Pueblo was just the latest in a series of violent incursions by the North Koreans against American and South Korean forces. The capture of the ship was a disaster for the U.S. Eighty two of its sailors were held prisoner for 11 months at a time when American forces were engaged in Vietnam and the situation might blow up into an all-out war.

What’s worse is that the ship was also loaded with some of the United States’ most sensitive information. This included the Navy’s most advanced electronic signals gathering equipment, classified documents pertaining to its mission, and the machines needed to decrypt coded American intelligence messages.

The machines were of particular significance and their capture was the biggest disaster of all. The North Koreans boarded the Pueblo and took its cipher machine right to the port of Wonsan, according to CIA Historian H. Keith Melton. Though they had the machines they needed, American codes still required code cards, which the crew of the Pueblo burned.

Thousands of miles away, however, the communists were getting the code cards from one of the most notorious American agents for the KGB, John Walker.

Walker had spent the first part of his life as a U.S. Navy warrant officer, serving for 20 years as a radioman. He went to work for the commander of the Atlantic submarine force, using his top secret security clearance to run the entire communications for the submarine force. All the while, he was attempting to live a lifestyle that was well above the pay for a chief warrant officer.

With his debts rising and his marriage on the rocks, Walker decided to use his position for his own monetary gain. He walked into the Soviet Union’s embassy in Washington and sold them a top secret Navy communications cipher card and offered his ongoing services for a weekly salary.

As with most spies getting a new source of funds, he wanted more and began to give the Soviets more information for more money, while recruiting a spy ring of his own. The ring included his son and brother, who were also in the Navy, and another naval warrant officer, Jerry Whitworth.

The information Walker provided the Soviet Union was astonishing and critical to the defense of the United States. He also provided information about U.S. troop movements and planning for ongoing operations in Vietnam, which the Soviet Union no doubt shared with their communist allies in Southeast Asia.

Along with that information, Walker provided the locations of all American nuclear submarines, nuclear launch and command and control protocols, locations of planned airstrikes in North Vietnam, war plans and manuals related to Navy operations in both the Pacific and the Atlantic.

Walker also provided the Soviets with the U.S. Navy’s cipher cards, so when the North Koreans captured the Pueblo and its onboard encryption machine, the communists had everything they needed to intercept and read American intelligence radio signals.