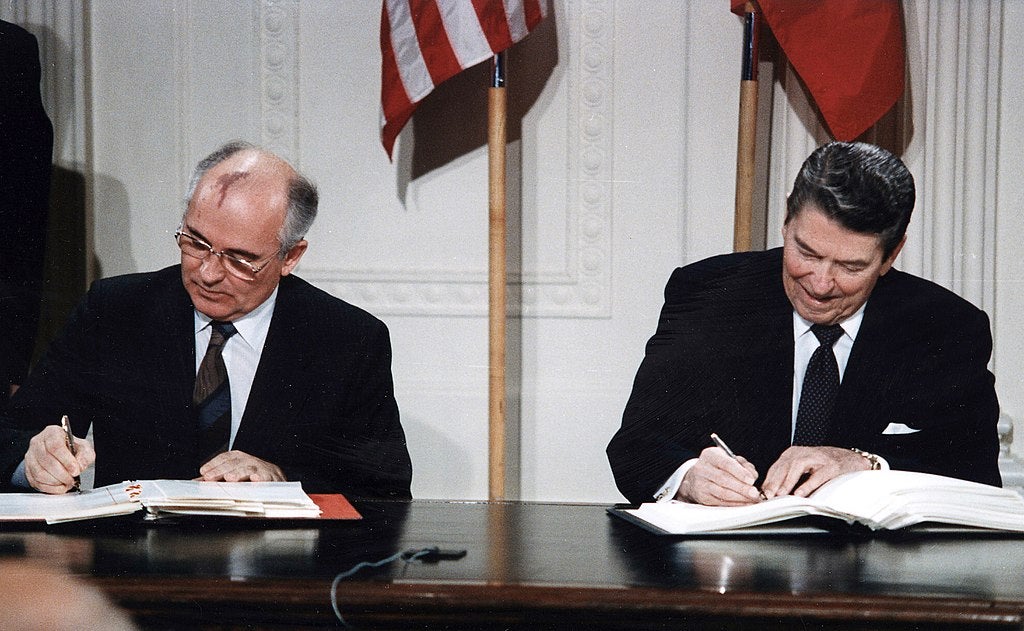 President Reagan and General Secretary Gorbachev signing the INF Treaty in the East Room of the White House.

There is never a guarantee that victory lies at the end of a conflict. Victory is a deliberate for peace. Peace, however, is a relative term because peace is not defined the same way by two warring sides. In an attempt to end a conflict locked in a stalemate, both sides may sue for a ceasefire. Some peace treaties are an absolute end to the conflict. Here are 5 peace treaties that were used to buy time for further, future conquests.

Pickering was President George Washington’s postmaster, whom he sent to New York to work on a peace treaty with the Haudenosaunee Confederacy. This was a diverse force consisting of six communities native to Iroquois. The pact returned to the Seneca over 1 million acres of land relinquished by another treaty a decade before. It acknowledged the Six Nations’ authority to rule themselves and make laws. As the years passed, the treaty was dishonored more and more, resulting in reduced pieces of land and allowing other tribes to settle on their promised land.

Oregon has been home to Native Americans for thousands of years. It consists of dozens of tribes who once lived in hundreds of villages in a diverse environment of mutual abundance. When these natural resources were desired by white people who were coming to the land, Indian people were viewed as in the way. They fought with the Native Americans, kidnapped them from their home territories, and massacred them. The treaty guaranteed that they would remain on the land as their own forever. Although others have long been predicting their demise, people from the “Indian Country” are very much alive.

In 1783, President George Washington stated the big picture of the Indian American policy. These Native Americans were in danger of genocide, and the United States would have benefited from their lands. Oregon today is home to nine federally recognized tribes, no thanks to the treaties they signed with the U.S. government to end their wars.

Beijing’s implementation of new regulations in Hong Kong that exclude minority legislators violates legally enforceable international agreements. The UK government, which was involved with the treaty, ensured that the parties kept their end of the deal. This treaty was supposed to guarantee Hong Kong an extremely high level of sovereignty over the Chinese Rule. Like many other treaties China had broken before, it disregarded the set agreements and undermined Hong Kong’s ability to rule itself in 2020. The UK promised to hold the Chinese accountable for their actions as plans to partner with international allies.

China has conflicted with Taiwan for as long as history can commemorate because of autonomy issues. Taiwan believes it is an independent country as a treaty was signed between the two stating so. Even with evidence of the treaty, the Chinese still disregard this and claim that Taiwan is a part of China. Recently, the Chinese threatened to invade Taiwan and use force to gain authority over Taiwan. Any provocation can and will be used by the CCP to justify force. Fortunately, Taiwan is an ally of the United States and has been assured of protection in case China invades.

In August of 2019, one of the final foundations of the Cold War-era weapons regulatory regime came crashing to the ground. The treaty that prohibited the U.S. and Russia from developing ground missiles with a range of 500 to 5,500 km was no longer in effect. Currently, only one significant peace accord restricts the nuclear weaponry of the United States and Russia. This treaty’s dissolution has been attributed to the opposite side’s infringement, as expected. The INF Treaty failed because the Cold War-era strategic power dynamic had shifted. Since both countries have large nuclear arsenals and none wants to lower their pride, it is unclear what might happen. Hopefully, neither Russia nor the U.S. will be tempted to use the weapons.