What it was like to fight in Spanish-American War, according to witnesses who were there - We Are The Mighty

What it was like to fight in Spanish-American War, according to witnesses who were there 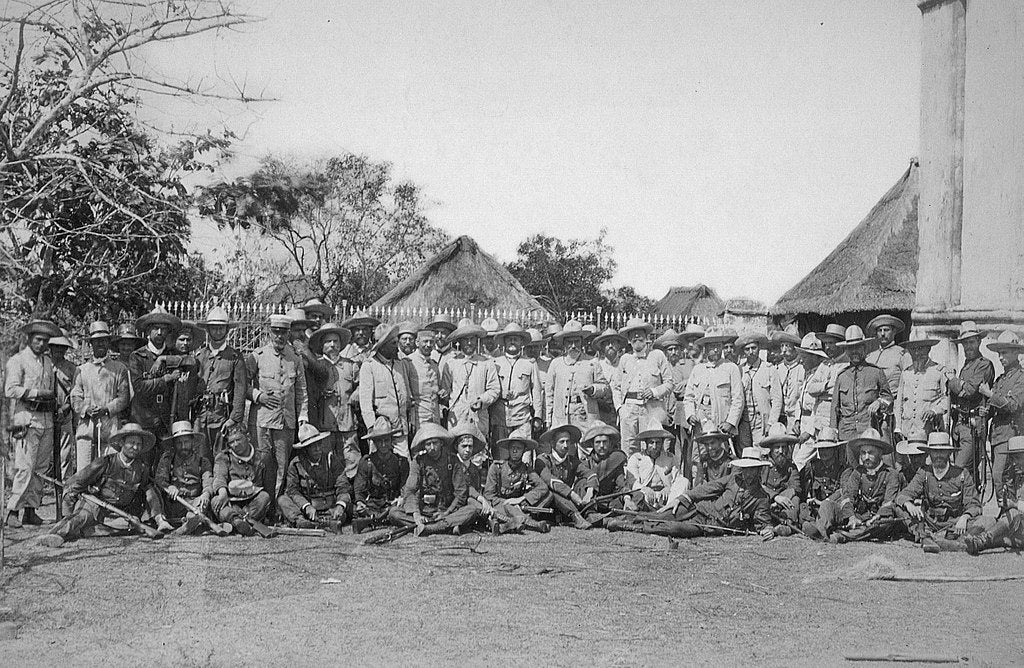 Spanish infantry; troops and officers during the Philippine Campaign of the Spanish-American War (1898). (Public domain).

One of America’s shortest and most one-sided wars from its history was the Spanish-American War. It lasted for just a few months in 1898. America enjoyed a series of victories that drastically expanded its presence on the world stage. And it took control of Caribbean and Pacific islands. The Spanish-American War would come to be known by a nickname, “The Splendid Little War.”

But for the service members who fought in the conflict, it was not always easy. And it was not clear at the outset that the U.S. would emerge victorious. So how did America enter the war, what was it like to fight the Spanish Empire, and how did that change the lives and careers of troops?

The rough road to war

First, lets go to an eyewitness who saw McKinley learn that Congress meant to declare war. This is from April 1898, over two months after the explosion of a U.S. Navy warship in Havana Harbor. Though the Navy now says it is more likely that the ship, the USS Maine, was lost to poor design and overheating during a coal bunker fire, the dominant theory in 1898 was that the ship had been lost to a Spanish mine.

President William McKinley reportedly told newspaper editor H.H. Kohlsaat, “I have been through a trying period. Mrs. McKinley has been in poorer health than usual. It seems to me I have not slept over three hours a night for over two weeks. Congress is trying to drive us into war with Spain. The Spanish fleet is in Cuban waters, and we haven’t enough ammunition on the Atlantic seacoast to fire a salute.” Kohlsaat said the president then, “…broke down and cried like a boy of thirteen. I put my hand on his shoulder and remained silent, as I thought the tension would be relieved by his tears. As he became calm, I tried to assure him that the country would back him in any course he should pursue.”

The U.S. had invested real money in the military in the years leading up to the sinking of the Maine. But it was still far from the behemoth it is today. Many shared McKinley’s worries, but the fever for war kept climbing.

Congress declared war on April 25, and the combatants fought a pivotal battle at Manila Bay just six days later on May 1. It’s important to remember that many people worried that Spain would be able to dominate America in an armed struggle. Its military was much larger, had experience operating across the globe, and carried all the renown of empire. But Commodore George Dewey knew that his fleet was smaller, but also more agile and advanced. When he received the declaration of war and his orders, he immediately set sail. He quickly made it from Hong Kong to Manila Bay in the Philippines.

It was nearly midnight when the fleet proceeded up the channel to Manila Bay April 30 and shore batteries fired upon it. But the old Spanish cannons had little effect on the armored U.S. ships. Sailors took no casualties as the fleet proceeded to its target, arriving around daybreak at Manila Harbor to find almost the entire Spanish fleet at anchor, protected by shore batteries.

Again, though, the cannons fired to almost no effect. We’ll let Dewey describe it:

The squadron proceeded across the bay at slow speed, and arrived off Manila at daybreak, and was fired upon at 5:15 a.m. by three batteries at Manila and two at Cavite and by the Spanish fleet anchored in an approximately east and west line across the mouth of Bakor Bay, with their left in shoal water in Canacao Bay

The squadron then proceeded to the attack, the flagship Olympia, under my personal direction, leading, followed at distance by the Baltimore, Raleigh, Petrel, Concord, and Boston, in the order named, which formation was maintained throughout the action: The squadron opened fire at 5:41 a.m. While advancing to the attack, two mines were exploded ahead of the flagship, too far to be effective.

The squadron maintained a continuous and precise fire at ranges varying from 5,000 to 2,000 yards, countermarching in a line approximately parallel to that of the Spanish fleet. The enemy’s fire was vigorous, but generally ineffective.

Early in the engagement two launches put out toward the Olympia with the apparent intention of using torpedoes. One was sunk and the other disabled by our fire and beached before an opportunity occurred to fire torpedoes. At 7 a.m. the Spanish flagship Reina Christina made a desperate attempt to leave the line and come out to engage at short range, but was received with such galling fire, the entire battery of the Olympia being concentrated upon her, that she was barely able to return to the shelter of the point. The fires started in her by our shell at this time were not extinguished until she sank.

At 7:35 a.m., it having been erroneously reported to me that only 15 rounds per gun remained for the 5-inch rapid-fire battery, I ceased firing and withdrew the squadron for consultation and a redistribution of ammunition, if necessary.

The three batteries at Manila had kept up a continuous fire from the beginning of the engagement, which fire was not returned by this squadron.

A couple of things are worth pointing out. First, firing commenced at 5:41 and ended at 7:35. The Spanish Pacific fleet was almost entirely in flames. It had taken less than two hours. Also, notice how Dewey hadn’t mentioned his wounded or dead? Well, over the course of that engagement and a second, lunchtime assault of less than an hour, there was one American death. A sailor suffered heatstroke and perished.

Dewey’s outstanding success neutered the Spanish on the waves. That gave the U.S. the opportunity to launch landing operations. Famously, future-President Theodore Roosevelt led the Rough Riders into combat in Cuba. Richard Harding Davis, a reporter, followed Roosevelt to San Juan Hill on July 1. The men of the charge were, like the ships at Manila Bay, dreadfully outnumbered but ultimately victorious.

But of course, the men didn’t have dense armor that allowed them to shrug off the rounds. Instead, they paid in blood for the hill, climbing as a group even as individuals fell in battle.

I speak of Roosevelt first because, with General Hawkins, who led Kent’s division, notably the Sixth and Sixteenth Regulars, he was, without doubt, the most conspicuous figure in the charge. General Hawkins, with hair as white as snow, and yet far in advance of men thirty years his junior, was so noble a sight that you felt inclined to pray for his safety; on the other hand, Roosevelt, mounted high on horseback, and charging the rifle-pits at a gallop and quite alone, made you feel that you would like to cheer. He wore on his sombrero a blue polka-dot handkerchief, a la Havelock, which, as he advanced, floated out straight behind his head, like a guidon. Afterward, the men of his regiment who followed this flag, adopted a polka-dot handkerchief as the badge of the Rough Riders. These two officers were notably conspicuous in the charge, but no one can claim that any two men, or anyone man, was more brave or more daring, or showed greater courage in that slow, stubborn advance than did any of the others. . . .

I think the thing which impressed one the most, when our men started from cover, was that they were so few. It seemed as if someone had made an awful and terrible mistake. One’s instinct was to call them to come back. You felt that someone had blundered and that these few men were blindly following out some madman’s mad order. It was not heroic then, it seemed merely terribly pathetic. The pity of it, the folly of such a sacrifice was what held you.

…It was much more wonderful than any swinging charge could have been. They walked to greet death at every step, many of them, as they advanced, sinking suddenly or pitching forward and disappearing in the high grass, but the others’ waded on, stubbornly, forming a thin blue line that kept creeping higher and higher up the hill. It was as inevitable as the rising tide. It was a miracle of self-sacrifice, a triumph of bulldog courage, which one watched breathless with wonder. The fire of the Spanish riflemen, who still stuck bravely to their posts, doubled and trebled in fierceness, the crests of he hills crackled and burst in amazed roars, and rippled with waves of tiny flame. But the blue line crept steadily up and on, and then, near the top, the broken fragments gathered together with a sudden burst of speed, the Spaniards appeared for a moment outlined against the sky and poised for instant flight, fired a last volley and fled before the swift-moving wave that leaped and sprang up after them.

The Spanish-American War comes to a close

About six weeks later, the war ended. America paid $20 million for infrastructure it took from Spain and received Puerto Rico, Guam, and the Philippines. Cuba was allowed to become an independent country, separate from both the U.S. and Spain. The Spanish Empire would never fully recover its might or prestige. The American success in the Spanish American War would hint at its future role and in World War I and superpower status after that war.