These photos show what our veteran presidents looked like in uniform 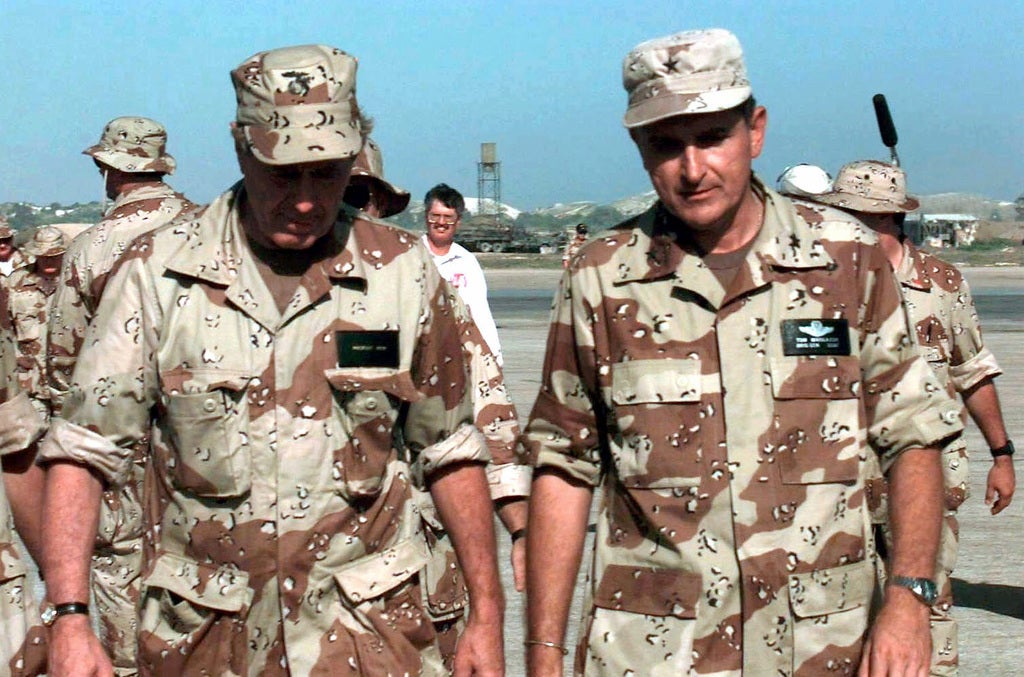 US President George Bush, left and wearing a desert camouflage BDU shirt and cap, walks toward the camera with US Air Force BGEN Thomas Mikolajcik, Commander AFFOR, right. Other members of the Air Force as well as the media are seen in the background. The President was visiting Somalia to witness first hand the efforts of Task Force Somalia that is in direct support of Operation Restore Hope.

Washington’s greatness stems from his precedents. He set the standard for civilian control of the military by resigning as General of the Army before becoming President. Photography wasn’t invented during Washington’s lifetime, but you can rest assured that the image of the man was larger than life.

President Monroe also served during the Revolution and was the last founding father to serve as president. Unfortunately, no photos of him exist, either in uniform or out. The foreign policy laid out by Monroe still bears his name. The Monroe Doctrine states that any effort by European nations to colonize or interfere with affairs in the Western Hemisphere would be viewed as acts of aggression requiring U.S. intervention.

This photo may not be of President Jackson in uniform, but is it not amazing that there is a photograph of Andrew Jackson at all? Jackson’s legendary defeat of the British at the Battle of New Orleans propelled him into the White House.

The same reason that a photo of President Jackson in uniform doesn’t exist applies to William Henry Harrison, as well as President John Tyler. When they served, photography just wasn’t invented yet. Harrison subdued the Shawnee chief Tecumseh. During the War of 1812, Harrison pushed the British out of Ohio and Indiana, recaptured Detroit and successfully invaded Canada.

Amazingly, daguerreotypes (a kind of early photography which used silver and mercury) exist of some early presidents, including Harrison and Tyler. Tyler organized a militia to defend Richmond, Virginia during the War of 1812 if a British attack ever came. It didn’t, but the British were in nearby Hampton, threatening Richmond.

Gen. Taylor served the U.S. in a number of wars. It was almost a given that someone who served so masterfully that the press compared him to George Washington and Andrew Jackson would also be President like those generals before him.

Pierce was a Brigadier General in Winfield Scott’s army fighting in the Mexican-American War. His experience in the Battle of Contreras was less-than-stellar, however. His horse tripped and he was thrown groin-first into his saddle. The horse fell onto Pierce’s knee, giving him a permanent injury.

Unfortunately, the nascent technology of photography couldn’t capture Abraham Lincoln in his Illinois Militia uniform. He was 23 at the time. The first known photo of Lincoln is below. The then-36-year-old was just elected to a two-year term in the U.S. House of Representatives.

Johnson was made a Brigadier General when President Lincoln appointed him military governor of Tennessee. He did not have full control of the state until 1863. There are very few images of Johnson in uniform, and no photographs exist.

Grant was the architect of the Confederacy’s final defeat. Just a year after President Lincoln gave Grant control of all Union Armies, Grant oversaw the surrender of Robert E. Lee at Appomattox Court House. He gave generous terms to all rebels and began the long Reconstruction of the South.

Hayes joined the Union Army after the shelling of Fort Sumter and was commissioned a Major. One of the Privates under his command was a young William McKinley. He served honorably throughout the war, garnering attention from General Grant, who wrote:

“His conduct on the field was marked by conspicuous gallantry as well as the display of qualities of a higher order than that of mere personal daring.”

Garfield had no military training but still received a colonel’s commission and was tasked with raising a regiment of Ohioans to drive the Confederates out of Eastern Kentucky. Garfield was so successful, he was promoted to General and later fought at the Battle of Shiloh.

Arthur was appointed Quartermaster General of the State of New York. He was in charge of provisioning and housing New York troops.

Harrison was commissioned a 2nd Lt. in 1862 and rose to Brig. Gen. by 1865. He led armies with Gen. William T. Sherman’s Atlanta Campaign.

McKinley, unlike most of the men on this list, started his career as an enlisted Private. He was promoted to Commissary Sergeant before his regiment was sent East. He fought at the Battle of Antietam, where his actions earned him a commission to 2nd Lieutenant.

Theodore Roosevelt served in the New York National Guard, quickly becoming his unit’s commanding officer. When war broke out in Cuba, Roosevelt resigned from his civilian job and quickly raised the 1st U.S. Volunteer Regiment. His actions in Cuba earned Roosevelt the Medal of Honor, the only president to receive it.

Truman had poor eyesight and couldn’t get into West Point, so he enlisted in the Missouri National Guard. He memorized the eye chart to pass the vision test. Eventually elected Lieutenant, Truman led men in battle in WWI Europe. During one encounter where his men began to run away, Truman let out a string of profanity so surprising his men stayed to fight.

The Supreme Allied Commander and General of the Army never actually saw combat. He was masterful at strategy, planning, and logistics. It was almost a given that Ike would run for President.

After his PT boat was struck by a Japanese destroyer in WWII, he and his crew swam to an island three miles away. Kennedy, with an injured back, carried a wounded crewmember to the island via a life jacket strap clenched between his teeth.

Johnson was on the Staff of Gen. Douglas MacArthur in Australia in 1942. While there, he was also personally reporting to President Roosevelt on the status of the Pacific Southwest.

Nixon was a birthright Quaker and could have been exempted from service and from the draft. Instead, Nixon joined the Navy in 1942. After some time in Iowa, he requested a transfer to the Pacific where he was made Officer in Charge of the Combat Air Transport Command at Guadalcanal and the Solomons.

Ford signed up for the Navy after the Japanese attack on Pearl Harbor in 1941. He served aboard aircraft carriers in the third and fifth fleets. He fought at the Philippine Sea, Wake Island, and LeEyte landings, among other places.

President Carter is also a nuclear physicist who helped develop the U.S. Navy’s nuclear submarine program. He worked on the USS Seawolf, the second nuclear submarine ever built. Carter is the only president to qualify for submarine duty, which is why the Navy deemed it appropriate to name a submarine the USS Jimmy Carter.

Originally landing in the Army Cavalry, he was transferred to the Army Air Forces’ First Motion Picture Unit and sent to the Provisional Task Force Show Unit called “This Is the Army.” He also managed the Sixth War Loan Drive in 1944.

Bush joined the Navy shortly after the attack on Pearl Harbor. At age 19, he was the youngest naval aviator to date. Bush was a brave bomber pilot and was shot down after hitting Chichijima. He flew 58 missions over the Philippine Sea and received the Distinguished Flying Cross, three Air Medals, and the Presidential Unit Citation awarded to his ship, the USS San Jacinto.

The younger Bush was commissioned in 1968. He flew F-102 Convair Delta Daggers. He was honorably discharged in 1974.