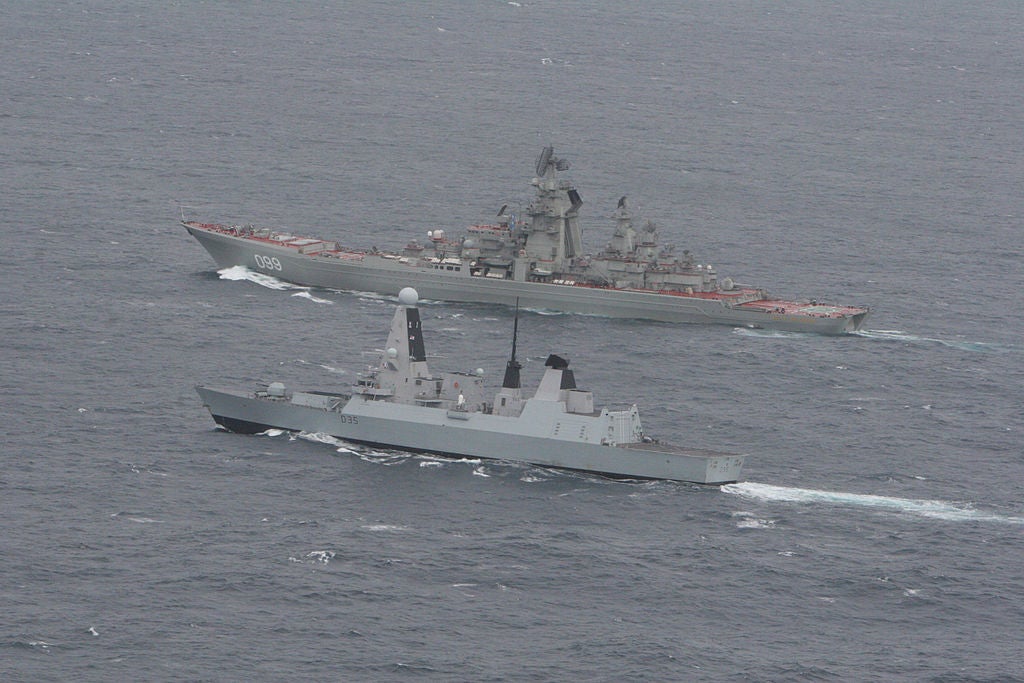 Now that the Russian guided missile cruiser Moskva has been forcibly converted into a submarine by Ukrainian troops, it leaves one to question what will be the new jewel of the Russian Navy.

There are a couple of prime candidates to keep a watch for, such as the Admiral Grigorovich-class frigate, Admiral Makarov. The Makarov took part in the 2022 Russian invasion of Ukraine and is considered the top contender to replace Moskva as flagship of the Russian Black Sea Fleet.

The worst contender is Russia’s mishap-prone aircraft carrier, the Admiral Kuznetsov. Barely able to move under its own power, the Kuznetsov has been described as a “living hell” for the men who serve as its crew.

That leaves the battlecruiser Pyotr Velikiy, or Peter the Great. Originally laid down in 1986, the ship was meant to be named for Yuri Andropov, the former head of the Soviet Communist Party. When the USSR fell, it was changed to another Russian historical figure from the country’s long-gone glory days.

The Peter the Great is a Russian nuclear missile cruiser, and is so large and combat-capable, that NATO and American war planners resurrected the term “battlecruiser” just to describe it and its class of warships.

After undergoing construction for more than 12 years, the ship was finally ready for service in 1998, when it was launched in the Arctic Sea and dubbed the flagship of Russia’s Northern Fleet. Ever since, the ship has been part of historic flexing of Russian naval capabilities. If ever there was a ship in the Russian service that might be considered impressive, it would be the Peter the Great.

In 2000, the battlecruiser was the lead ship in the first Russian naval training exercise since the fall of the Soviet Union in 1991, a wargame that took place in the Barents Sea. When that exercise turned into a salvage operation for finding and raising the submarine Kursk after an accident sunk the sub, the battlecruiser took the lead in securing the area.

Peter the Great also led the Russian Navy in 2004, when much of the country’s fleet sailed to the Mid-Atlantic to hold its largest wargame since the Fall of the USSR. There, it met other important ships of Russia’s navy, including the Kuznetsov. The trip from the Arctic to the Atlantic was its first-ever long voyage.

Four years later, the battlecruiser again left Russian waters to enter the Caribbean Sea for the first time – and the first time a Russian ship had done so since the Cold War. Its purpose was a joint exercise with ships from Venezuela’s navy. The Russians made port calls all over the area, including a stop in Havana, Cuba.

From there, the Peter the Great sailed for Turkey, Cape Town and India, all while headed to participate in various countries’ naval drills, making it probably one of Russia’s best-trained ships. That training was put to the test off the coast of East Africa, where it captured a number of pirate vessels.

Its training and reputation made it a natural escort when the Admiral Kuznetsov deployed to the Middle East in support of the Syrian Government in its ongoing civil war and fight against ISIS in 2016. It has since returned to its home port and the Barents Sea, where it routinely leads training exercises – likely the only ship Russia can be proud of.