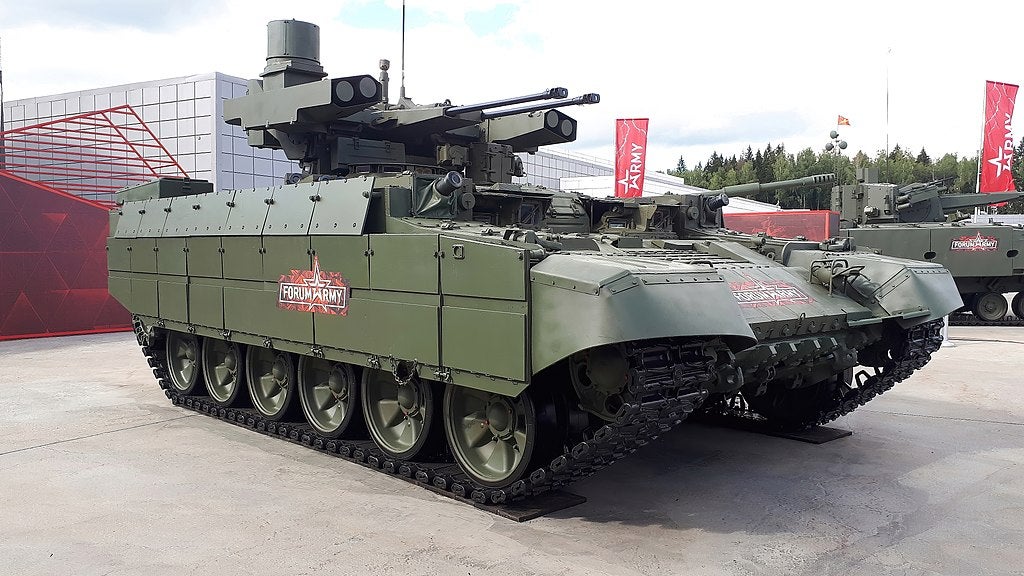 Believe it or not, Russia has learned a thing or two from its military adventures and blunders in the past few decades. One of the things it learned is to be ruthless in its execution of a plan, which it tries to do on every occasion – see South Ossetia and Crimea. Another thing it learned was urban combat – see its actions in Chechnya.

The end product of these lessons is the BMPT “Terminator”, an armored fighting vehicle designed to support tank operations and other fighting vehicles in urban combat. Russia currently only fields around nine of them, but is sending them to Ukraine in hopes of turning the tide of the war.

Although it’s only called “Terminator” by its manufacturer, Uralvalgonzavod, the armament the vehicle carries is reminiscent of the programmed death machines from the James Cameron movie series. It carries four Ataka missile launchers, two 30mm 2A42 autocannons, two grenade launchers, and one 7.62 automatic machine gun. Best of all (for those inside), it was designed to survive in close-quarters urban situations.

The BMPT is built on the chassis of Russia’s workhorse main battle tank, the T-72, and its development has been so long in coming, it’s a byproduct of the Soviet Union’s military engineers.

During the Soviet Union’s war in Afghanistan, the USSR discovered that its armored fighting vehicles were not sufficient to fight against infantry units or guerrillas like those fielded by the Afghan Mujahideen. A solution was needed. That need was highlighted a few years later as the Russian military engaged in Chechnya.

In response, Russia created a few iterations of today’s BMPT before settling on the current “Terminator” design. A lightly-armed version arrived to the Russian military in early 2000. In 2002, its armament was improved to its current version. In 2005, Russia began to use the vehicle in exercises, but was slow to adopt. They probably wish they had done it faster.

It wasn’t until 2018 that the Russian Federation under Vladimir Putin began receiving more BMPTs, but only 10 were delivered. They were stationed in Russia’s Central Military District. This time, the chassis was improved, using the main components of the T-14 Armata tank. They have since been seen in the Battle of Sievierdonetsk in Ukraine in 2022.

In Ukraine, the Russians are sending two BMPTs out with each main battle tank for special missions in urban terrain. In open areas, two Terminators can protect two tanks apiece. The ability to engage enemy infantry from multiple directions at different elevations allows the BMPTs to sufficiently subdue enemy forces, or so the Russians say. Instead of trying to fight off Ukrainian soldiers with Javelin missiles, the main battle tanks can focus on their intended targets while the BMPTs clear the road of deadly projectiles. Russia hopes this will help stem heavy tank losses.

The BMPT has its own issues, however. The three man crew are all in the forward hull, leaving most of the sides and rear in blind spots. Without another BMPT or an infantry backup, they will be just as vulnerable to weapons like the Javelin missile as their tank counterparts.