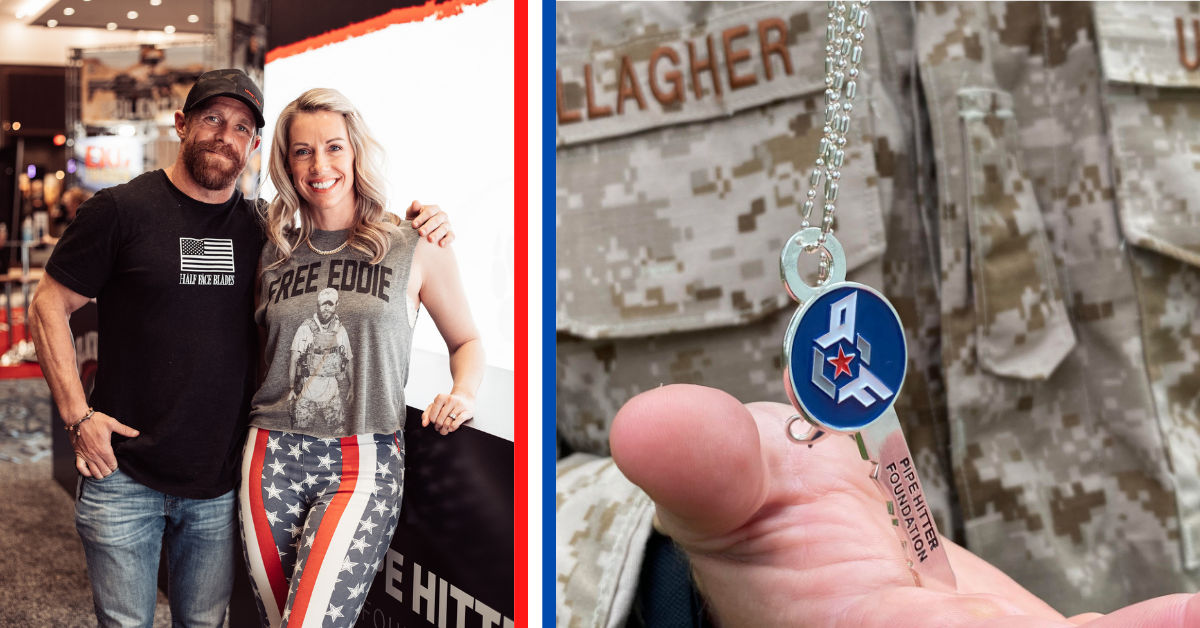 When retired Navy SEAL Chief Eddie Gallagher received his “not guilty” verdict, in no small part thanks to the nonprofit organizations and advocators who stood beside him, he and his wife Andrea promised to do the same for others. And they are.

The Pipe Hitter Foundation was created to ensure “justice for all” isn’t simply lip service, Andrea said. “It exists to help servicemembers, police and first responders but we also help their families,” she explained. We understand that the hardship affects at a deeper level than just the individual that’s being persecuted or prosecuted, or both. The family is also a part of that. It was born out of our struggle on realizing how much it impacted our kids and family during Eddie’s ordeal.”

Eddie’s arrest and subsequent war crimes trial made headlines across the world. But so did his wife, the couple’s supporters and eventually, then-President Trump.

Both were quick to say Eddie’s case wasn’t typical and most military or first responders who are accused do not have access to the resources they eventually did.

That’s where the Pipe Hitter Foundation steps in.

“We have a wife out of San Diego, whose husband is a police officer out of La Mesa. By the evening of the day a video went viral with him engaging with an individual at a trolley station, there were protesters at their home,” Andrea said. “They had to move from their brand new marital home and basically had to go into hiding.”

She’s referring to Officer Matthew Dages, who was involved in an arrest captured on the now-viral video circulating the internet. Though the former officer was quickly cleared by the internal investigation on use of force, the District Attorney eventually filed charges against Dages.

With support from the PHF, he was acquitted after having to pay over $30,000 in legal fees. They’ve reported being over $80,000 in debt due to the costs associated with Dages case. “Now we [Pipe Hitter Foundation] are trying to make sure that he gets either reinstated or some type of compensation is done because they’ve ruined him,” Andrea shared.

Eddie and Andrea reported experiencing threats and harassment during his trial. “I think that you’re already accused and found guilty before anyone’s even heard the story,” he said. “A lot of times we’re highlighting the service member, the first responder but I think we want to shed more light on the families that suffer behind the seat. I mean, it’s detrimental.”

They’d know, with their own experience navigating Eddie’s charges. According to the couple, they were harassed and received a litany of threats against their lives throughout the process. Without the eventual support of high-profile names and an excellent attorney who believed them, they’re convinced he would have stayed in jail.

The Navy completed a comprehensive report not long after Eddie’s own acquittal, which indicated culture, command influence and confusing structure being a problem in the legal system. During Eddie’s own case, Naval prosecutors were removed for unlawful behavior.

The Navy TImes reported on the comprehensive report  in January of 2020, after its release.  Though the official Navy website indicates the full report is in fact available, it appears to  have been removed. Still listed on the website is the following:

While the findings and recommendations varied slightly between Services, the CR recommended changes in the following areas for both Services: culture, organization, education and training, resourcing, and unlawful command influence. The report included background and data for each focus area, which the Services will use to implement formal changes in the future.

Over the past few years, the news media has been plagued with stories of officers involved shootings and service members being arrested. On the evening of former officer Dages arrest, the city was looted and portions of buildings set afire. His attorney alleged the prosecution was seeking charges to avoid further destruction, regardless of whether he himself had committed wrongdoing.

It’s cases like this which the Pipe Hitter Foundation has made its commitment to changing and impacting. A voice for the voiceless, they both said.

“When you’re in a situation like that, you need to have people that you can trust and that are going to advocate for you,” Eddie said. “Because when we were going through our trial the people that stood by our side, that meant more to us than anything, because it just sort of softens each blow you take on alone.”

To learn more about the Pipe Hitter Foundation and its mission, click here.