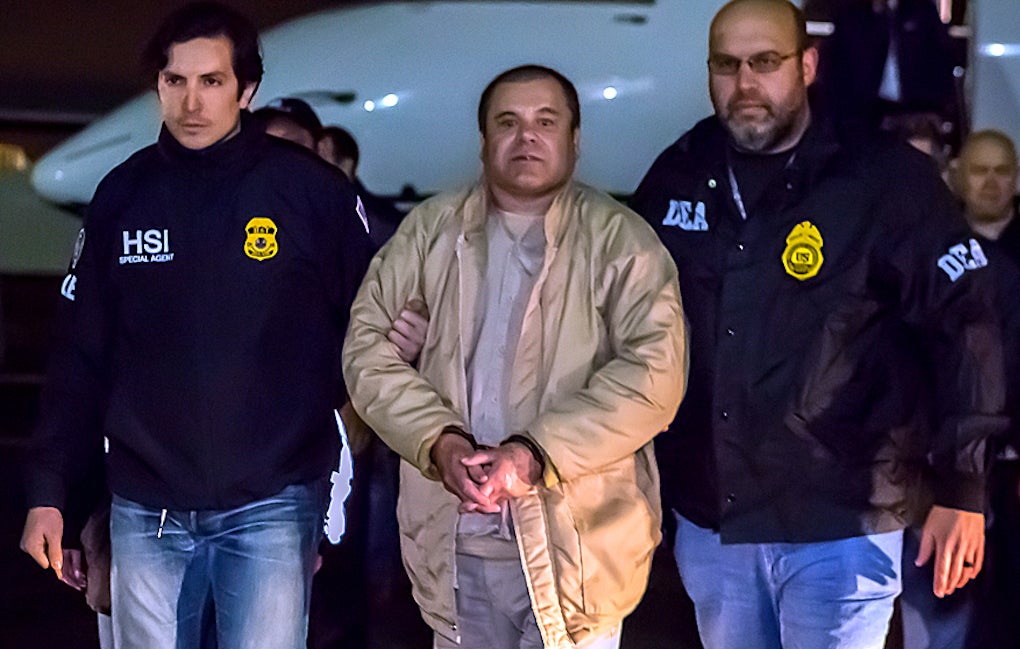 El Chapo in US custody after his extradition from Mexico.

Mexican drug cartels have been operational since the early 1930s and dominate the wholesale illicit drug market. They are the leading suppliers of marijuana, heroin, cocaine, methamphetamine and other illicit narcotic drugs. In addition, Mexican drug cartels have fueled violence within Mexico and its surrounding countries through the decades, especially with the alleged aid of their politicians.

According to the US state department, the Mexican drug cartels control about 70% of the cocaine trafficked into the United States. Considering that the USA is the world’s largest consumer of cocaine, Mexican cartels lead to lethal consequences with the US authorities such as the DEA, especially over trafficking routes.

The Sinaloa cartel is arguably the most powerful of the Mexican drug trafficking cartels. Initially, it was led by one of the most currently respected drug lords, Joaquin “El Chapo” Guzman, until Ismael Zambada Garcia succeeded him, also referred to as El Mayo. The cartel has most of its central operations in alleged in Culiacan, Baja California, Chihuahua, Sonora and Durango. To date, the Sinaloa cartel is perceived as the most preeminent drug cartel.

Another major drug cartel is the Beltran-Levya cartel, founded by the four Beltran-Levya brothers; Hector, Alfredo, Carlos, and Arturo. Previously, the cartel was integrated with the Sinaloa cartel. They helped them fight for trade routes and infiltrate Mexico’s judicial, police institutions, and political sectors to gain information about anti-drug operations. Following the death and arrest of the founders, the cartel disbanded.

One of the long-standing rivals of the Sinaloa cartels is the Juarez cartel which mainly controls chihuahua and the trafficking routes across Texas and Mexico.

Another strategically positioned Mexican cartel is the Arellano Felix organization, known as the Tijuana cartel. The cartel is based in Tijuana, an important Mexico border city used to traffic narcotics into the US.

Mexican Cartels Avoiding The US Military

One of the ways the Mexican cartels have been able to avoid the US military is through collaboration of informants. Most drug trafficking organizations have a highly formal hierarchy whereby individuals possess different levels of authority and roles. However, when collaborating, the vertical order is dismantled, and a horizontal one is adopted where there are no ranked positions. Courtesy of horizontal hierarchy, every cartel leader involved in the collaboration can participate in the decision-making escapades whereby every factor is considered before acting. Basically, the cartels amalgamate and function similarly to subsidiary companies. Comparatively, much like the Taliban’s use of separate cells to decentralize the risk to the commanders themselves.

Aside from that, the level of communications within the drug cartels is very phenomenal and works similar to terrorist groups. Terrorist groups are known for their coded and hard-to-decipher language, which makes them undetectable. When Mexican cartels communicate with one another, they use coded language to help them stay off the grid and enhance their security. It is common to find that most Mexican cartels utilize the Narcos language where words do not mean as they do literally. “Let’s go to the beach,” for instance, would mean to make an appointment.

At the same time, they incorporate a system of codes that correlate with numbers. Mexican cartels have capitalized on the high level of corruption within the Mexican Government and military. For a long while, Mexican authorities have been in cahoots with the cartels where their relations involve the politicians facilitating their smooth entry into the United States. In return, the Mexican cartels share the profits of the trade with the leaders. Such cooperation has proven to be an effective tactic that allows Mexican cartels to operate hassle-free and undetected. For that reason they avoid interacting with the U.S. because they could dominate their own Government at will. The American armed forces will take it personally if you shoot at them and hunt you down. They can’t bribe their way out of a warrant either. If the U.S. is going for a High Value Target, you better bet American is going to bring something fiery from the sky.