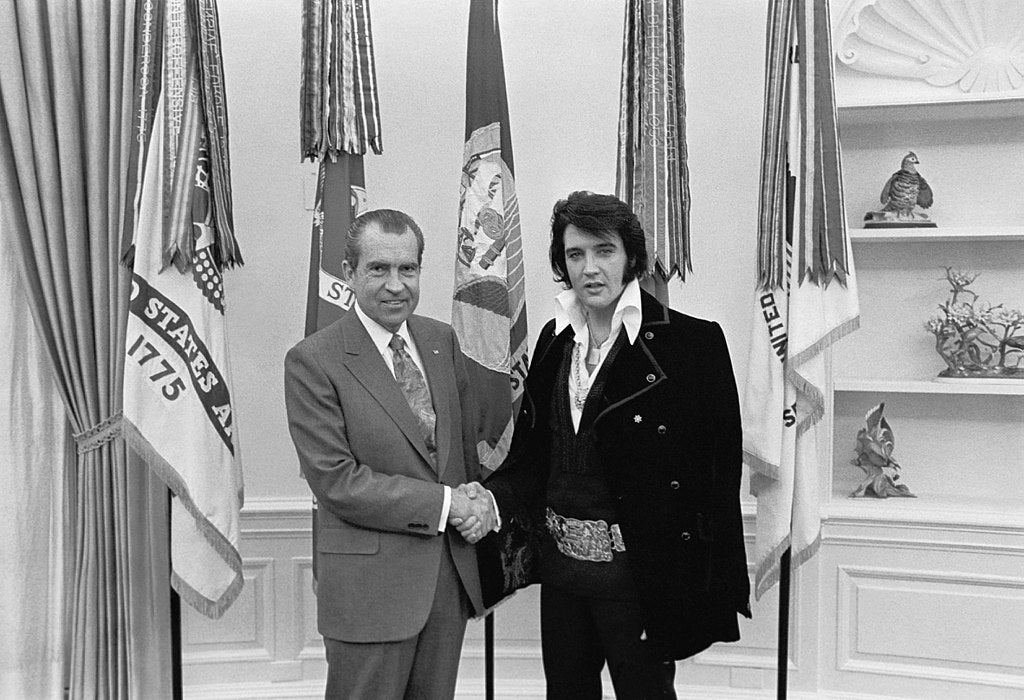 Elvis Presley meeting Richard Nixon. On December 21, 1970, at his own request, Presley met then-President Richard Nixon in the Oval Office of The White House. (Wikimedia Commons).

Musician and actor Elvis Presley escalated to fame in the mid-1950s as one of the most renowned big names in the rock and roll industry. By the mid-20th century, he had appeared in countless radio shows, television and the silver screen.

Once a lonely southern boy, Elvis Presley was a fascinating musician with unusual interests – and none bigger than his love of guns.

Elvis had a humble birth. His twin brother’s death haunted him for his whole life. Had this tragedy not occurred, he might not have felt such loneliness and his personality might have been incredibly different.

Despite tons of praises heaped on him during his career as a musician, what’s intriguing is how his social standing could have been fueled by being an introvert. However, what remains in books is how a gift given to him by his mother shaped his career along with the rock and roll industry.

Contrary to the global perception he imprinted among fans, he led his life as a hermit and was described by others as an introvert. For such an influential person, controversies regarding his life as a musician created the impression that he never wrote any script and hardly played the guitar. Based on a publication dubbed The Dark Truth Behind Elvis, all co-writer credits were merely used for fame, and allegedly he couldn’t play the guitar he carried around as well as others thought.

It, however, turns out that these traits could be attributed to his solitary lifestyle. It may be surprising to learn that this ultimate performer was incredibly shy as he grew up. He learned to play the guitar as early as 12 years old. Surprisingly, he turned down an opportunity to perform at a local radio station at the peak of his childhood because he ‘was too scared.’ I can’t imagine Elvis being scared.

When he was 19, he auditioned to contribute to a Gospel quartet called Songfellows. The judging panel turned him down in a rather expected move, but the audition later worked out thanks to Elvis’s previously recorded songs.

Elvis loved shooting things. By the time he passed on in 1977, he had collected over 40 guns, including an assortment of rifles and machine guns sufficient to fund a mini-militia. There is no precise reason he loved guns this much, but it started when he was a young boy.

Before fully fledging into the music industry, Elvis usually celebrated his birthdays pretty quietly. For such a ‘solitary’ boy, a few extra special birthdays accentuated with extraordinary gifts and birthdays meant a lot to him.

The most memorable birthday that shaped his life was his 11th. Although he didn’t get the gun he wanted, he got what he needed. Elvis asked for a bicycle or a rifle for his birthday gift, but his mother bought him a guitar. Later that year, he spent the better part sharpening his guitar skills.

Armed — but not dangerous

Despite the prohibition to impersonate police outside of costume parties, Elvis drew his passion for guns quite regularly pulling over speeding people and giving tickets. By the 1970s, he had grown sufficiently paranoid to bring guns with him on stage. Elvis would stuff some into his boots for use in case people grew too rowdy. Despite having a gun permit, he evidently saw guns as toys.

To cap the summit of the century that no one would have anticipated, Elvis arrived at the White House in a limo intending to have a PR conference with President Nixon. In addition to an assortment of badges he had collected from police departments across the U.S., Elvis brought the president a mounted Colt .45 pistol used in World War II. What the two talked about remained concealed until a press release.