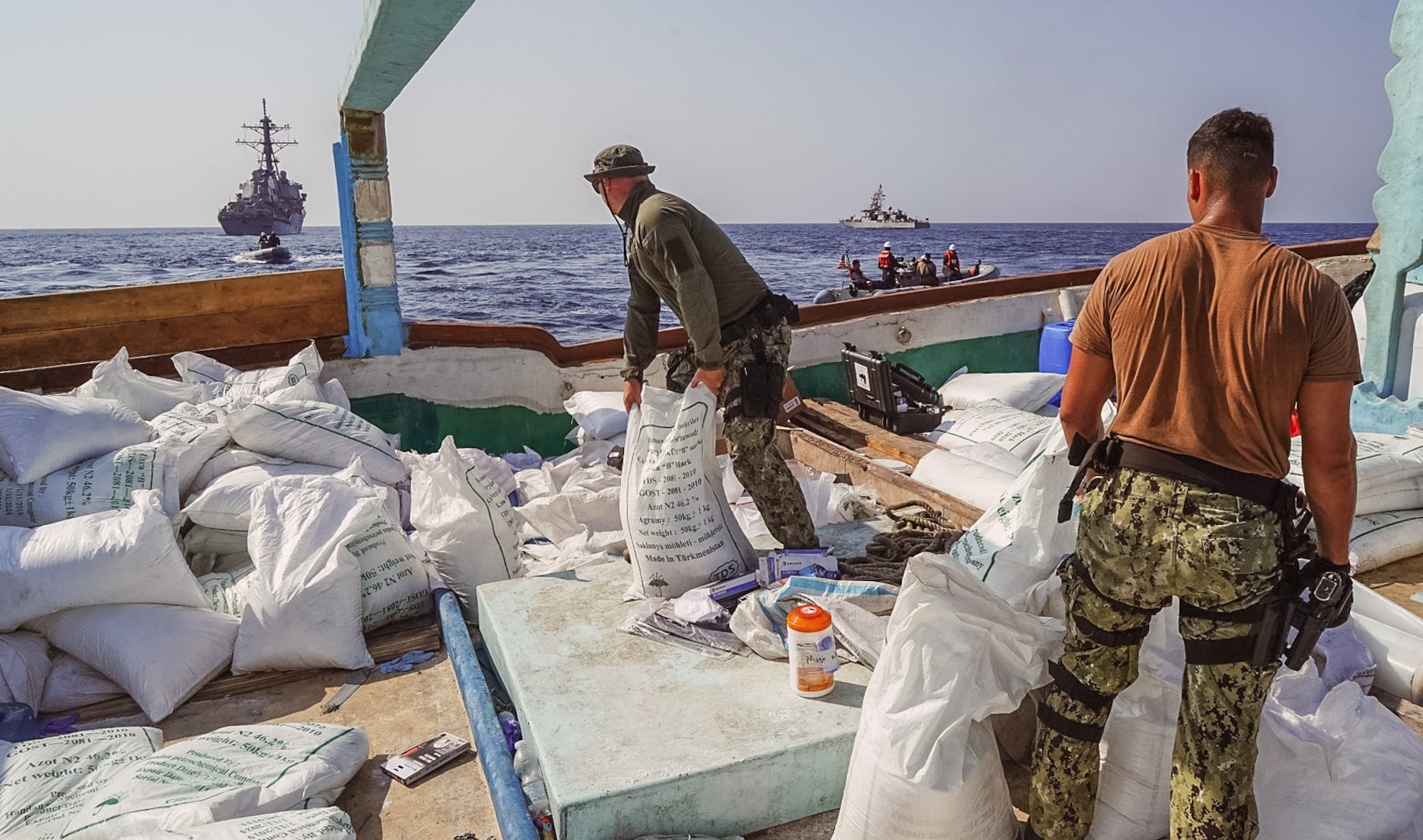 Sailors seize ship's cargo with USS The Sullivans and USS Hurricane in the background (U.S. Navy).

The U.S. Navy maintains freedom of navigation on the seas through power projection. Working with allied nations, American vessels combat piracy and illegal shipments around the world to keep the oceans safe. The U.S. 5th Fleet, headquartered in Bahrain, made its first interdiction of ammonium perchlorate in the Gulf of Oman during an operation with the Yemen Coast Guard. Over 70 tons of the explosive material was intercepted aboard a fishing vessel sailing from Iran to Yemen.

The interdiction took place on November 8, 2022, in international waters and was conducted by the guided-missile destroyer USS The Sullivans (DDG-68) and the Coast Guard ship USCGC John Scheuerman (WPC-1146). The patrol costal ship USS Hurricane (PC-3) and Navy explosive ordnance technicians from 5th Fleet’s Task Force 56 also took part in the weeklong operation to seize the vessel, fully search it, and verify the illicit cargo.

The interdiction resulted in the capture of over 70 tons of ammonium perchlorate, a powerful oxidizer which the Navy notes is “commonly used to make rocket and missile fuel as well as explosives.” Additionally, the vessel was carrying over 100 tons of urea fertilizer. “Urea is a chemical compound with agricultural applications that is also known for use as an explosive precursor,” the Navy said in a Central Command press release.

The historic interdiction of ammonium perchlorate, and in such a large quantity, was highlighted by 5th Fleet. “This was a massive amount of explosive material, enough to fuel more than a dozen medium-range ballistic missiles depending on the size,” said Vice Adm. Brad Cooper, commander of U.S. Naval Forces Central Command, U.S. 5th Fleet and Combined Maritime Forces, in the same press release. “The unlawful transfer of lethal aid from Iran does not go unnoticed. It is irresponsible, dangerous and leads to violence and instability across the Middle East.”

The Navy noted that the fishing vessel was intercepted along a route historically used to traffic weapons from Iran to the Houthis in Yemen, a U.N. Security Council-designated terrorist group. U.N. Security Resolution 2216 and international law prohibit the direct or indirect supply, sale or transfer of weapons to the Houthis. The four Yemeni sailors aboard the vessel were transferred at sea from the USS The Sullivans to the Yemen Coast Guard for repatriation. On November 13, the vessel was sunk in the Gulf of Oman after it was determined to be a hazard to navigation for commercial shipping.