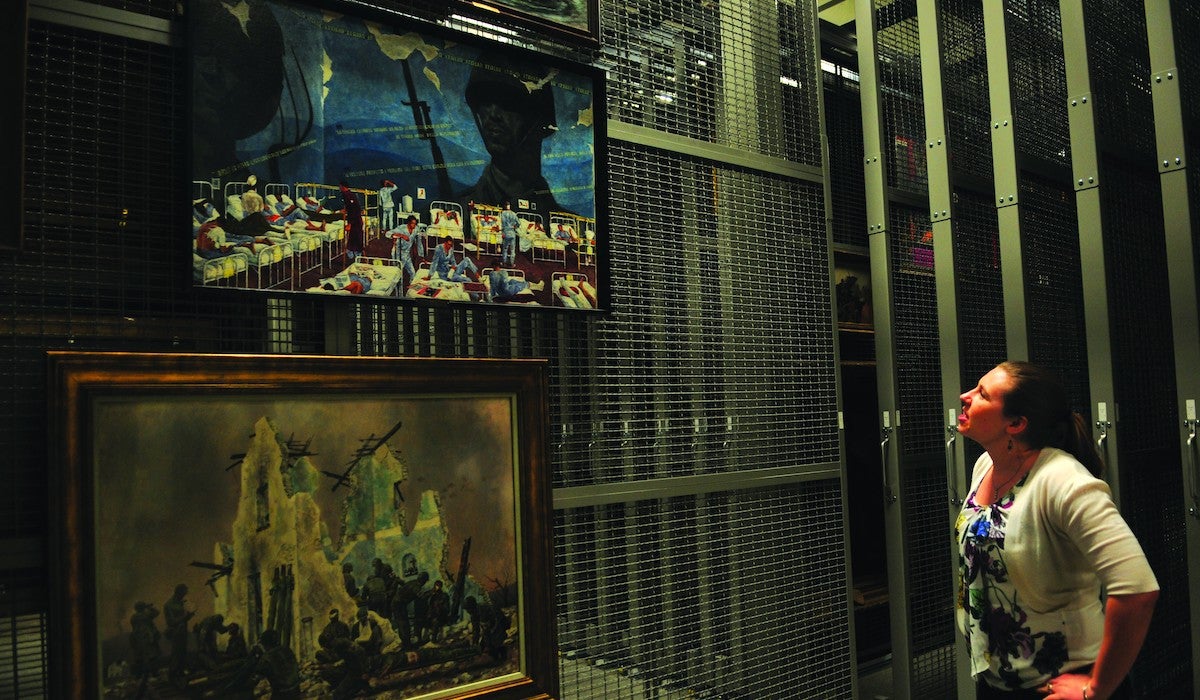 Fort Belvoir, Virginia: The Army has a giant warehouse of war art that includes not just Hitler’s watercolors but also oil paintings by Norman Rockwell.

It might seem like the Army would be the last likely patron of the arts, but the truth is over the last hundred years, the Army has rescued and confiscated a vast collection of art. The collection of captured and commissioned war art features 16,000 paintings, photos and sculptures, and all are sitting inside a climate-controlled football-field-sized museum at Fort Belvoir.

Before being moved to the museum, this treasure trove of art was stashed inside a large warehouse. The collection features work by everyone, from enemy combatants to ordinary soldiers and even Hitler’s watercolors. The collection program initially started during WWI when the Army dispatched eight combat artists to roam the battlefields in Europe and record firsthand experiences of the average soldier.

The combat artists’ renderings would later be used as part of propaganda efforts to drum up support for the war before being collected and filed away in the Army warehouse. Then, during WWII, the Army added to their growing museum with captured Nazi and Fascist propaganda so it might be preserved for future generations. These materials were deemed too controversial for the public at the time, but the Army knew that future historians might find them useful.

Thousands of art pieces were returned to their rightful owners after the war, but the Army held onto anything that showed the Nazi leader or pictured a swastika. Other additions during WWII included historical pieces unrelated to war art that were initially stolen by the Nazis but then reclaimed and returned by the Monuments Men. The Monuments Men were a team of over 400 soldiers and civilians who worked to protect Europe’s cultural heritage, which might have otherwise been lost to the war. The Monuments Men have been the focus of several documentaries and movies, the most recent of which was in 2014 and detailed the challenging experience of discovering the world’s lost art. Thanks to the Monuments Men, some of the great art saves from WWII included the Mona Lisa, The Last Supper, and the Altarpiece of Veit Stoss.

Of course, the cache at Fort Belvoir isn’t the only reserve of art and historical artifacts that the Army owns. There are collections all across the country under the Library of Congress, Archies, Smithsonian and Park Service stewardship. Most of these collections are tightly sealed and unknown to the public to help balance the compromise between preservation and security. However, Fort Belvoir is an exception to the norm, as the Army has routinely allowed researchers and journalists to come in and take a look.

Now that the Army has an official museum, the collection will be moved there, and access will be open to the public. Of course, that was before the pandemic put a wrench in those plans. The museum is located on 84 acres at Fort Belvoir, about thirty minutes south of Washington, D.C. The main building is approximately 185,000 square feet. It displays selections from the Army Art Collection and artifacts, documents, and images collected over the years. The American public has never seen most of these images, and the Army expects the museum will welcome at least 500,000 people every year. The National Museum of the United States Army is the capstone of the Army Museum Enterprise and offers visitors a comprehensive portrayal of Army history and traditions. In an ode to our nation’s veterans, the museum will be opening its doors on November 11, 2020. The opening ceremony will be limited to a small group of Army leaders, but the event will be live-streamed, so historians worldwide will be able to witness the historic moment. Free timed tickets are required for entry and available for request through the museum’s website.