How a USAF veteran turned a coffee truck into a community 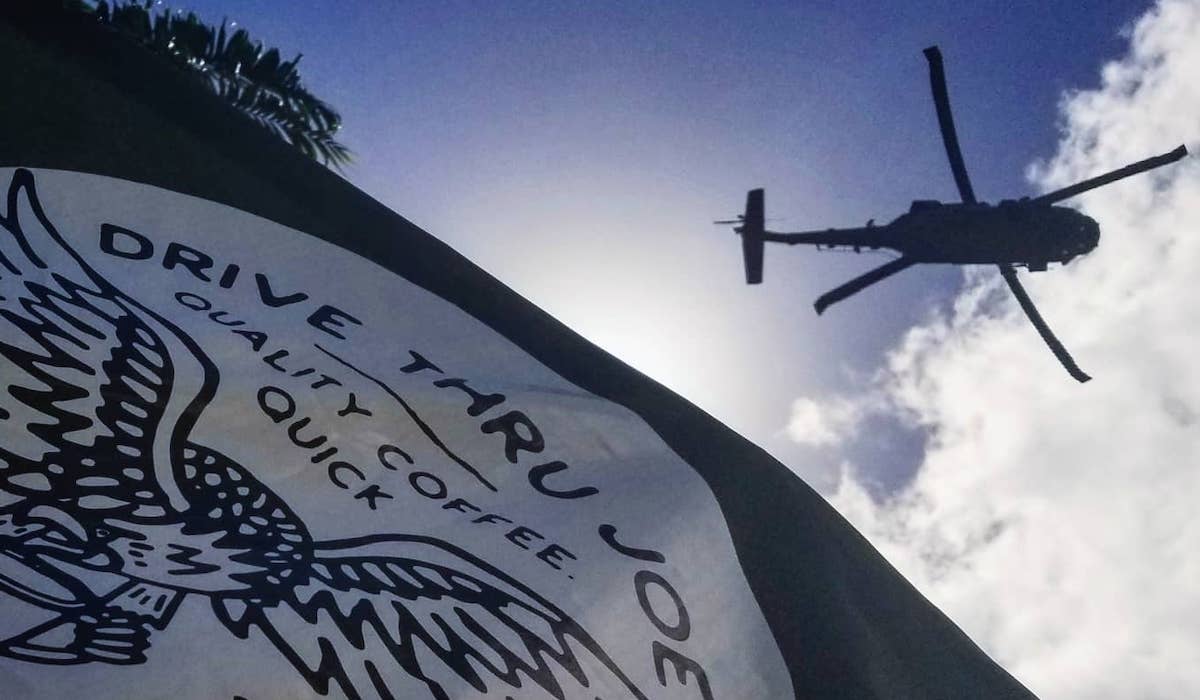 Watching Joe Real and his coffee crew hustling from car to counter, drinks or tablets in hand, as they serve a stream of cars and walk-up customers is inspiring. The service is quick but seems to steadily pour in throughout the morning.

For Joe, everything about his business Drive Thru Joe’s has been fast-paced. This USAF veteran opened his first coffee truck on Oahu in December 2017; in nearly three years, he has expanded to two permanent locations and is poised to operate six by early 2021.

How does a military veteran with no experience in coffee or restaurant service not only survive but thrive in a high-income state like Hawaii? Coffee is a niche market on the island, and there is plenty of competition from major retailers and local mom and pop restaurants.

But Real saw it differently. He saw a chance to bring comfort and community with convenience to a military base. “Coffee can be your home or sense of belonging when you are away,” he stated. “Having a solid coffee stop or place that is ‘yours’ at an affordable price was the goal.”

Real was ending his 6-year enlistment in the U.S. Air Force. He was always the lowest ranking guy in his Intel squadron, and coffee runs were his task. He described the process of leaving the base, waiting in line while feeling entirely confused with the complex coffee orders and returning to the base again. This was such a long process in the workday and it was also ineffective. Half of the time the orders were not correct or were cold by the time he drove back and found another parking space.

While he was deployed during his final year of his commitment, Real spent his downtime researching coffee and investing his money. He grew his funds and his education on the entire process, from bean to cup. He returned to Hawaii, separated from active-duty, and purchased a food truck.

The beginning of a coffee community

Joe was attending university and opening a business with a lot of his own capital. But he credits military benefits and programs for helping him start Drive Thru Joe’s. He took advantage of the GI Bill to attend school and help him with expenses. The VA loan enabled him to purchase a home with great rates and stability. Finally, the Boots to Business program for veterans and disabled veterans was crucial in getting him smart on entrepreneurship and business. Without these, Real is not sure he could have succeeded.

He opened his first location on Joint Base Pearl Harbor-Hickam on December 20, 2017.

It was a tough start. He and his single other employee hustled with a single espresso machine. They learned on the fly and quickly discovered that pivoting their business toward cold drinks would be lucrative and efficient. They could make four cold brew beverages in the time it took to make one hot beverage. Real also learned that quality and customer service are better than drinks.

Soon, the truck moved locations to Schofield Barracks, and the business took off. With a larger customer base and a prime location in front of the commissary, Real and his team started building a following and a community. He focused on bean quality and keeping his supply chain local to support both the military and Hawaiian communities. He and his staff take pride in not only serving coffee quickly but also educating their customers. It makes them more unique than the average coffee spot.

“If you take just a few minutes to talk to someone about their tastes and what they like, you build that connection,” Real told WATM. “They want to come back. Coffee is super important, but customer service is too. They go hand in hand.” They averaged over 3500 drinks a week last year and are poised to double that this year.

Drive Thru Joe’s works has collaborated with the Girl Scouts and Boy Scouts on base and is a sponsor of the Schofield Soccer Club. He has also participated in fundraisers for the local schools and the enlisted spouses club. While he was ready to leave active-duty, Real wanted to stay affiliated with the military and serve this community he is so proudly a part of.

Aside from expanding to more locations on the island, he is working on franchising. Real would like to see Drive Thru Joe’s on bases around the United States – it is a long process that he is working on now. He hopes to offer these opportunities to other veterans. With all the branding and systems in place, it would allow his business to grow while also enabling others like him to succeed in their own endeavor.

The most important thing to him is to keep the same spirit, community, and aloha of Drive Thru Joe’s at every location. What started as a simple coffee truck has turned into an almost cult-like following, with customers PCSing off-island and still posting about the coffee. He chuckles at the posts about brewing “Joe-style” at home and enjoys knowing that they have made an impact on people.

I have no doubt that in the next 10 years, I’ll find another Drive Thru Joe’s coffee truck somewhere on the mainland. And I will happily place my order for the best cold brew on Oahu, wherever that may be.