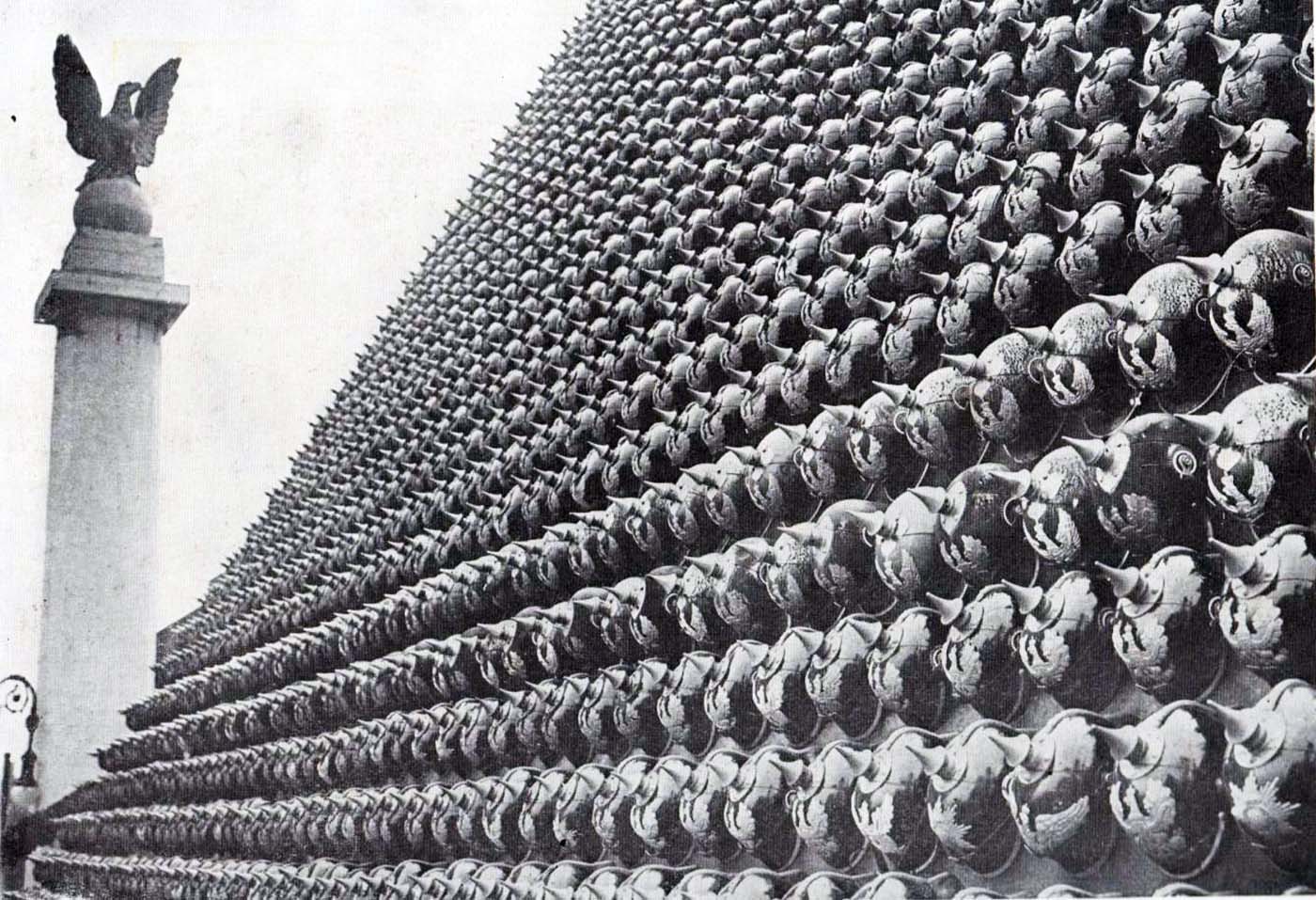 The end of WWI saw America’s emergence as a world power. As part of the victorious Allied Powers, America captured vast quantities of German military equipment following the Armistice. What did the government do with these spoils of war? It created an art exhibit on New York’s Park Avenue to celebrate the momentous victory, appropriately named Victory Way.

The practice of commemorating victory over an enemy is as old as warfare itself. It demonstrates strength to rest of the nation and communicates to potential adversaries that you are not to be trifled with. America’s display of power took the form of an imposing art display that started right in front of Manhattan’s Grand Central Station. There, a grand pyramid was constructed of seized German Pickelhauben helmets. The iconic spiked headgear, although quickly phased out by frontline German troops during the war in favor of the more protective Stahlhelm, was easily associated with the defeated German Empire.

The Pickelhauben pyramid was reflected by a twin at the other end of Victory Way, several blocks down Park Avenue from Grand Central Station. Each pyramid consisted of 12,000 helmets supported on a hollow substructure. A gruesome but false narrative emerged that each helmet was taken from a dead or captured German soldier. In reality, the Pickelhaube was phased out for the Stahlhelm in 1916 and the helmets on display were captured from German warehouses or factories.

Another false narrative claimed that the number of helmets represented the number of Germans killed by American troops. Not only would this number be difficult to actually record, but German war dead numbered nearly 3 million during 1917 and 1918 when America entered the war. In all likelihood, American troops were responsible for more German casualties than helmets on Victory Way.

In addition to the pyramids at each end, Victory Way featured other captured German equipment including disabled cannons, rifles, and even grenades. Columns lined street and statues of eagles and Lady Liberty were erected and draped in red, white, and blue ribbons with patriotic stars. While Victory War was an impressive display of America’s success in the war, it also had a more practical purpose.

During WWI, the U.S. government sold war bonds to finance the military. The display of captured German equipment also functioned as an advertisement. To repay its war bond debt, the government sold stockpiles of German helmets and rifles through merchants stationed near Victory Way. Larger war spoils like artillery and vehicles were sold through special Army auctions. The auctions were so successful that most of the items displayed on Victory Way were sold by the time the art exhibit closed in late 1919.