100 years after its groundbreaking, the National WWI Museum is as current as ever - We Are The Mighty

100 years after its groundbreaking, the National WWI Museum is as current as ever 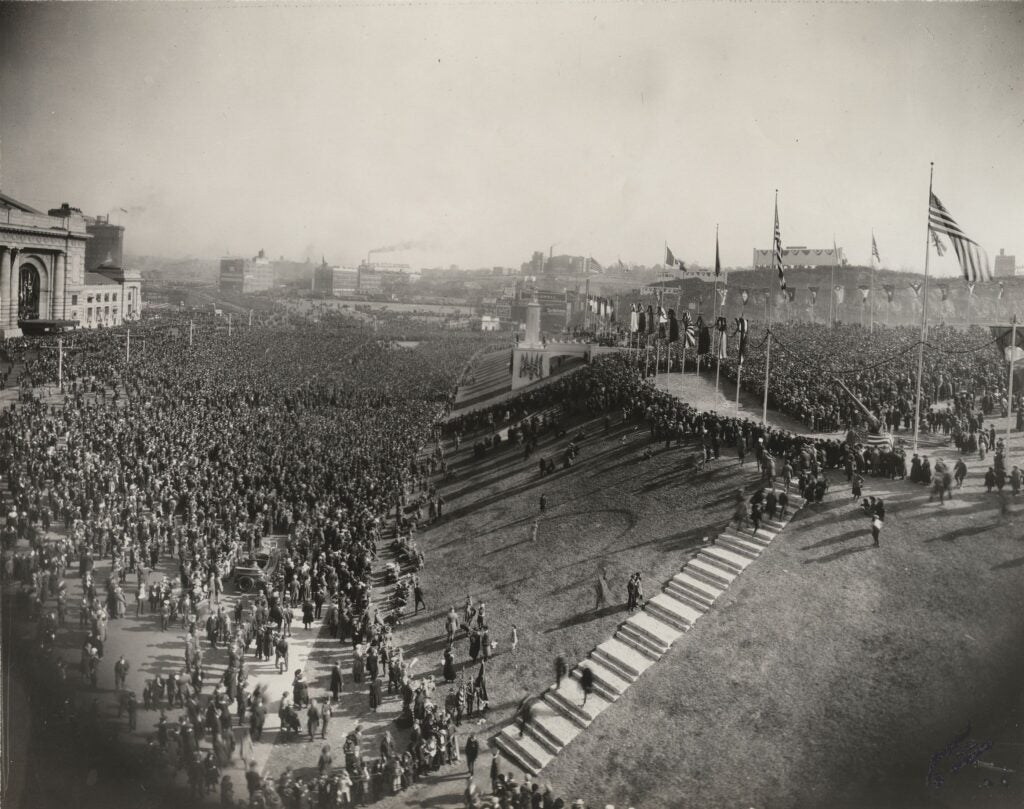 WWI, known as the Great War before there was a second, was one of the deadliest conflicts in human history. By the time it ended on November 11, 1918, empires rose, fell, and the stage was set for a second world war. However, many people believed that the Great War was so horrific that it was the war to end all wars. The war needed a national memorial to honor those who gave their lives, provide a focal point for veterans and preserve the lessons learned for future generations.

Two weeks after the armistice ended the war, a group of 40 prominent Kansas City business leaders and other citizens gathered to begin the process of creating such a memorial. The city was a major hub of industry and also served as a crossroads of America. Most soldiers who crossed the country from the west came through Kansas City on their way to Europe.

A committee was formed to raise funds for the memorial. In February 1919, a two-week public subscription campaign was held and raised over $2.5 million (over $39 million in 2021). A public survey determined the citizens of Kansas City and the surrounding areas wanted not only a memorial, but a museum as well.

Before there was even a building to house it, the museum was established in 1920 and began collecting items from the war. Simultaneously, a design competition was held to select the memorial’s architect. The winner was Harold van Buren Magonigle, who previously designed the USS Maine National Monument in Manhattan’s Columbus Circle.

Over 200,000 people attended the groundbreaking ceremony on November 1, 1921, in Kansas City, Missouri. VIPs included Vice President Calvin Coolidge and the five main allied commanders from the war: Lieutenant General Baron Jacques of Belgium, Admiral of the Fleet Lord Beatty of Great Britain, General Armando Diaz of Italy, Marshal Ferdinand Foch of France, and General of the Armies John Pershing of the United States. “It was the only time in history that those five men were together in the same place at the same time,” noted Senior Curator Doran Cart. A local veteran was also chosen to present flags to the five commanders. The Kansas City local was Harry Truman, future 33rd President of the United States.

On November 11, 1926, eight years after the end of the Great War, Coolidge returned as president to dedicate the completed memorial and museum. During the dedication, Coolidge said that the memorial, “…has not been raised to commemorate war and victory, but rather the results of war and victory which are embodied in peace and liberty.” Another speaker at the dedication was Queen Marie of Romania who served as nurse during the war.

When it opened in 1926, the memorial included the central Liberty Tower along with other buildings designed in a classical Egyptian Revival architecture style. However, the Great Frieze, depicting America’s progress from war to peace in stone, was not complete until the early 1930s. Also completed later was the site dedication wall built where the temporary platform stood during the groundbreaking in 1921. The wall features bronze reliefs of the five allied commanders.

The original museum opened with the memorial in 1926. Much of its collection was donated by war veterans and their family members as well as foreign governments and museums. Over time, the collection grew and the buildings began to wear from the elements. In 1994, the memorial and museum were closed for restoration. Local shopping malls volunteered to display part of the museum’s collection during the closure.

The Kansas City community passed a limited-run sales tax in 1998 to help raise funds for the restoration. Along with national and international support, over $100 million was raised. In 2004, Congress officially recognized the museum as the nation’s official WWI Museum. As a result, construction began on the 80,000-square-foot museum expansion along with the Edward Jones Research Center beneath the original memorial.

On September 20, 2006, the museum and memorial were added to the National Register of Historic Places and designated as a National Historic Landmark. The new museum and restored memorial were opened to the public on December 2 later that year. Interestingly, despite President Coolidge dedicating it as the national WWI memorial in 1926, it was not until 2014 that President Obama signed legislation recognizing it as “a World War I Museum and Memorial.” It was only then that the entire site was redesignated as the National World War I Museum and Memorial.

The museum collects all items from WWI and from any nation that was involved in the conflict. “We still collect today,” Cart said. “About 97% of the materials are donated from the United States and around the world.” The collection began with a Navy torpedo and has grown to include uniforms, weapons and other artifacts from the war. “Anything you can imagine from WWI, the museum has collected.”

The National WWI Museum collaborates with other museums like the Smithsonian and the First Division Museum to share artifacts and conduct research. Recently, they loaned several pieces to the Smithsonian’s National Museum of African American History and Culture for an exhibit. Lesser known experiences from WWI like those of minorities, women, and indigenous people have become a major focus for the museum and the field as a whole. Cart noted that the research is a constant endeavor. “I think I find something new everyday.”

Visitors to the National WWI Museum and Memorial are invited to experience the conflict not only through the artifacts and the context that they are presented in, but also through a new immersive VR experience. War Remains transports visitors to the Western Front through a custom set, stunning visual effects, and powerfully designed sound. With the power of VR, visitors feel like they’re in the trenches as the ground shakes from the explosions all around them.

The museum is also working on a gallery refresh that will allow visitors to view interpretive material on their digital devices. “Even though we deal with a subject that’s well over 100 years old, we also realize that there are many ways of presenting the story of the war to the public,” Cart said of the museum. “We adapt very well to different ages and we’re building upon that today.”

The National WWI Museum and Memorial remains committed to preserving the history of the war in a holistic way and presenting it to the public so that people of all ages and backgrounds can appreciate the scale of devastation that the conflict brought about. After all, those who fail to learn from history are condemned to repeat it.