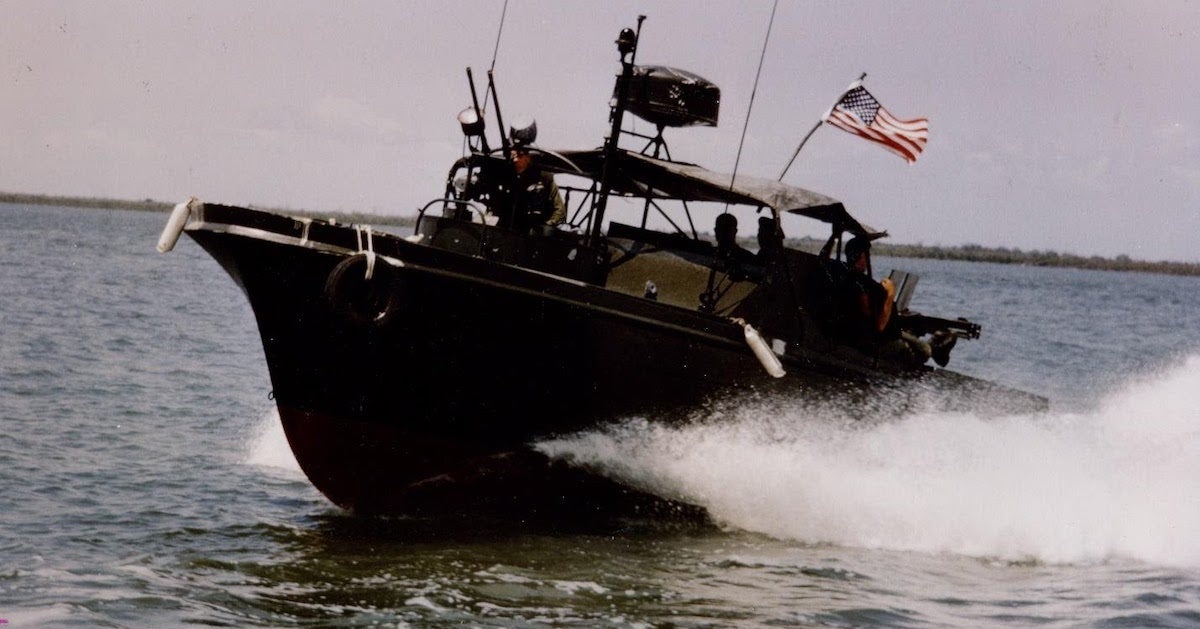 Picture the brown-water Navy of the Vietnam War and you probably picture Martin Sheen as Capt. Willard floating upriver on a PBR to “terminate Col. Kurtz’s command…with extreme prejudice.” The Patrol Boat, River was a small rigid-hulled patrol boat used extensively in the Vietnam War to navigate the country’s many waterways. Employed operationally from 1966 until 1971, PBRs were used to conduct patrols, disrupt enemy movement, and most notably, insert and extract Special Forces units like Navy SEALs and the fictional Capt. Willard.

As the war in Vietnam escalated, the U.S. military quickly saw the need for a small and agile watercraft that could move quickly on Vietnam’s many rivers. The Navy approached civilian shipbuilder Hatteras Yachts to convert their 41′ fiberglass recreational family boat by shortening it and fitting it with water pump-jets instead of propellers. The pump-jets would allow the boat to operate in extremely shallow water. Willis Slane and Jack Hargrave of Hatteras took on the challenge and delivered the prototype to the Navy for testing in just 7 days.

In 1965, the Navy awarded a contract to Uniflite Boats to build the first 120 PBRs. They were powered by two Detroit 6V53N engines producing 180 hp each (later increased to 216 hp), and two 14YJ water pump-jet drives manufactured by Jacuzzi. With this power, the boats could cruise between 25 and 31 knots. The later Mark II PBR was slightly bigger, increasing from 31′ to 32′ in length and 10′ 7″ to 11′ 7″ beam. Mark II PBRs were also fitted with improved drives to reduce fouling and aluminum gunwales to resist wear.

The PBR was extremely maneuverable, being able to turn within its own length. But the PBRs party piece was its stopping ability. Fitted with thrust buckets, the PBR could reverse its Jacuzzi water pump-jets and go from full speed to a dead stop within a couple of its own length. Because of its fiberglass hull, the boat was also extremely light. This meant that it had a draft of just 2′ when fully loaded and could be slingloaded by a helicopter.

PBRs were typically armed with a twin M2HB .50-caliber machine gun turret forward, a single rear-mounted M2HB, one or two M60 7.62mm light machine guns on the port and starboard side, and a Mk19 40mm automatic grenade launcher. However, PBR captains were known to augment their weapons suites with additional M2HBs and 81mm mortars. Some even swapped out their bow-mounted twin .50-cals for a Mk16 Mod 4 Colt 20mm automatic cannon. In addition to all this, the four-man crew was armed with a full complement of M16 rifles, shotguns, M1911 handguns, and hand grenades.

All this lethality came at the cost of protection. Though the .50-cal machine guns had some ceramic armor shielding and the Coxswain’s flat had quarter-inch thick steel armor plating, the fiberglass-hulled boats had little else in the way of armor. Rather, PBRs relied on their acceleration, maneuverability, and outright speed for their survivability. This made them extremely adept at hit and run attacks and special operations. In the latter, the PBR found great success. Not only did the boat serve as an excellent insertion and extraction platform, its heavy armament meant that it could provide direct fire support for special operations teams if necessary.

At the height of production during the Vietnam War, two PBRs were rolling off the assembly line every day. By the war’s end, over 750 had been built. Today, less than three dozen PBRs survive in conditions ranging from stripped hulls to fully operational, of which there are just seven. However, the PBRs legacy is greater than its surviving examples.

The most decorated enlisted sailor in U.S. Navy history, James “Willie” Williams, commanded PBR 105. During a patrol on October 21, 1966, Williams’ and another PBR engaged over 65 enemy boats and numerous well-concealed ground troops in a three-hour running battle. Williams’ actions during the battle earned him the Medal of Honor. His citation notes that he “exposed himself to the withering hail of enemy fire to direct counter-fire and inspire the actions of his patrol” and that he “demonstrated unusual professional skill and indomitable courage throughout the 3 hour battle.”

To the unknowing tourist looking at a static display, the PBR might just be a greenish grey military boat. A cinephile might recognize it as the boat from Apocalypse Now. But, to the special forces teams that were pulled out of a hot extraction by one, the PBR was a guardian angel. To the sailors that crewed them, a PBR was home.