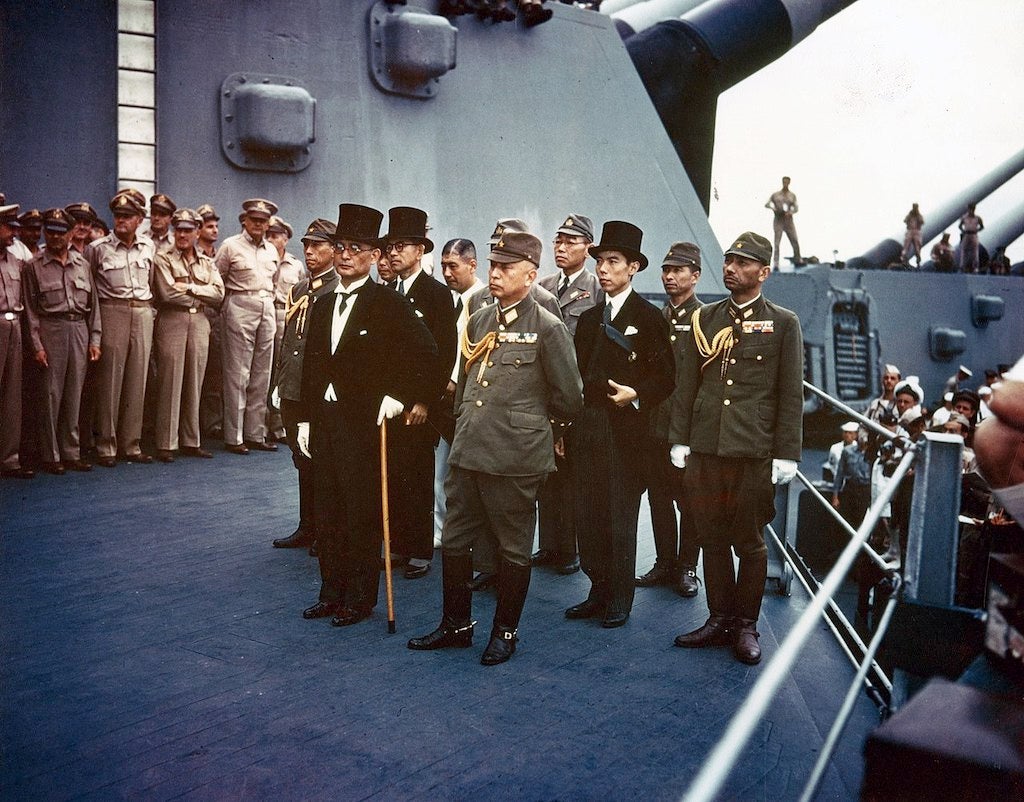 Representatives of the Empire of Japan stand aboard USS Missouri prior to signing of the Instrument of Surrender. (Photograph from the Army Signal Corps Collection in the U.S. National Archives).

Imperial Japan was a ruthless empire that spread across Asia during the Second World War like a viral plague. The imperialist military would not surrender and the civilians that would defend every inch of native Japanese soil meant millions of lives lost. There is controversy on the exact number but it is undeniable if you include the decedents alive today who would not exist.

In 2016 President Obama visited Japan and the biggest question on everyone’s mind was, ‘Is he going to apologize for the Atomic Bombs?’ Thankfully he did not, Imperial Japan deserved it and in case someone forgot here is a microscopic glimpse of the ocean of war crimes they committed:

Americans were shocked by a photograph run in American newspapers showing a Japanese soldiers raising his sword to behead an Allied prisoner of war, bound and tied and bent over on his knees. Captured airmen shot down over Japan were “beaten to death, beheaded, buried alive, cut into pieces for medical experiments and in a few cases eaten by vengeful Japanese.” Some POWs were publicly displayed naked in 4-x-5-foot cages. Captured B-29 bombardier Raymond “Hap” Halloran shrunk from 215 to 122 pounds and was displayed naked in a cage at the Tokyo Zoo, where people cursed and threw things at him.

President Obama did not offer an apology and Japan did not deserve one either.

Step 2: Keep the Japanese emperor as a puppet ruler

In order to control the population, Emperor Hirohito will remain in power. The Japanese could save face even though the United States was calling the shots. He had no real power and nationalists had to accept his command.

The Rising Sun flag is akin to a symbol of the devil to Asians and Koreans, just like how the swastika is a symbol of Nazis which reminds Europeans of invasion and horror.

That quote was about whether the Rising Sun flag could be displayed at the 2020 Tokyo Olympic Games. When you neuter the enemy, burn their colors.

We Americans believe in freedom of religion, however, Shinto gives support to the idea that the Japanese Emperor is divine. No, he’s just a man. The purification of that thought is needed to give room for the idea of a democracy. Smite me.

The Tokyo War Crimes Trials took place from May 1946 to November 1948. The IMTFE found all remaining defendants guilty and sentenced them to punishments ranging from death to seven years’ imprisonment; two defendants died during the trial.

Directive SCAPIN-93 ended the law that made it a crime to criticize Japan and everything the Imperial Government did not agree with. An addition effect of releasing political prisoners is more people who are pro-democracy within the populace.

Step 6: Write the Japanese Constitution for them

The occupation was to be a nominally Allied enterprise, but increasing Cold War division left Japan firmly in the American sphere of influence.

With the Soviets and China at Japan’s door step, and our bases, it was necessary to make sure Japan stayed obedient. We wrote their constitution for them for good measure.

Step 7: Assert complete dependence of the US military for protection

This is a given. No toys if you can’t play nice with other nations.

Japan invested its money into infrastructure and development. When you have Uncle Sam as a de facto bodyguard you save a lot of money on national security. Money injections for the reconstruction of Japan also came with American cultural influence.

Step 9: Return sovereignty to the people

April 28, 1952, was when the San Francisco Peace Treaty took effect, marking the official end of World War II and the allied occupation of Japan.

Japan may be the captain of this ship but this is our navy. We still call the shots on that far away archipelago. They forget from time to time until Kim Jong-Un, Putin, and Xi start salivating at the thought of us no longer being on good terms.

The relationship is mutually beneficial in the modern era. We have extended our sphere of influence in the region and trade. One of the unfortunate byproducts of our cultural exchange is anime but I digress. Japan is our ally because frankly they don’t have a choice in the matter. Brought to heel and domesticated, is a necessary evil. If that metaphor bothers you, remember that 27,000 American POWs were captured by the Japanese and over 40% of them brutally died under their watch. They used prisoners of war for target practice. Never forget that this is an alliance of servant and master. Not equals.