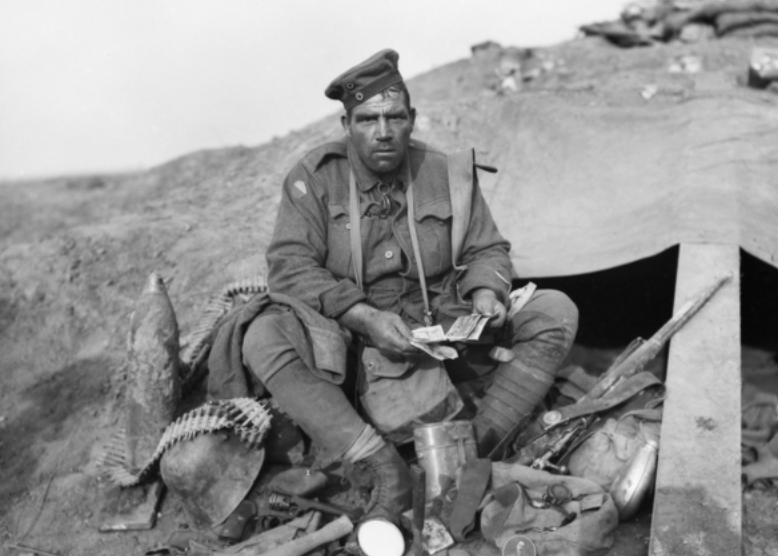 War trophies and battlefield loot were especially common during the two World Wars. However, one allied soldier’s hijacking habits during WWI earned him the nickname the “Souvenir King”. Despite his lack of military discipline, the Souvenir King was also one of the bravest soldiers in the trenches.

Private No 2296 John Hines, also known as Barney, was born in Liverpool, England in 1873. From a young age, Hines was a rebel. At the age of 14, he ran away from home to join the Army before his mother caught him. Undeterred, he joined the Royal Navy two years later and served on a gunboat during the Boxer Rebellion chasing pirates in the China Sea. The next year, he was discharged and began a globetrotting expedition in search of gold.

While searching for his fortune in South Africa, the Boer War broke out. Unofficially, he served as a scout for many British units during the war. Afterwards, Hines continued his quest for gold in the United States, South America, and New Zealand. Coming up dry each time, he made his way to Australia and found work at a sawmill before WWI broke out in August 1914. Though he was now in his early 40s, Hines tried to enlist but was rejected for medical reasons. Still, he jumped from recruiting post to recruiting post until he was accepted in 1916 as part of a reinforcement for the Australian 45th Battalion.

In France, Hines found a distaste for the standard-issue Lee-Enfield .303 rifle. Instead, with his large stature and immense strength, Hines preferred to go into battle with a pair of sandbags filled with Mills bomb hand grenades. Seeing the potential of a soldier like Hines, his commanding officer gave the Souvenir King a Lewis machine gun. This turned out to be a match made in heaven. “This thing’ll do me,” Hines assessed in his Liverpudlian accent. “You can hose the bastards down.”

Hines’ fearlessness and excitement on the battlefield also earned him the nickname “Wild Eyes”. “I always felt secure when Wild Eyes was about,” Hines’ commanding officer said. “He was a tower of strength in the line—I don’t think he knew what fear was and he naturally inspired confidence in the officers and men.” Of course, Hines’ strongest reputation was still as the Souvenir King.

Annoyed by the harassing sniper fire from a German pillbox, Hines charged the position, leapt on its roof and performed a war dance taunting the Germans to come out. When his taunts went unanswered, Hines lobbed a handful of Mills bombs through the gun port. Shocked and disorientated, the 63 German soldiers that survived came out and surrendered to Hines who proceeded to collect souvenirs of badges, helmets, and watches before marching them back to the Australian lines. Hines would squirrel away any battlefield loot that he could get his hands on.

On another occasion, Hines came across a heavily shelled German aid station. Ironically, the only survivor was a British soldier who Hines scooped up and bravely carried back to allied lines. Sadly, the Tommy died before they returned. After delivering his fallen comrade to friendly hands, Hines returned to aid station and looted it. Still, he set his sights higher.

At Villers-Bretonneux, Hines acquired a piano which he managed to hold on to for a few days before he was forced to give it up. Another large souvenir was a grandfather clock. However, after its hourly chimes started to draw German fire, Hines’ battle buddies ironically destroyed it with one of Hines’ favorite weapons—Mills bombs. At Armentieres, Hines found a keg of Bass Ale which he rolled back to friendly lines. However, he was stopped by military police who wouldn’t let him take the keg back to the trenches. In classic Hines style, he returned with a friend to drink the whole thing on the spot.

Perhaps Hines’ finest souvenir hunt came at Amiens. After disappearing for a few hours, Hines was caught by British soldiers looting the vaults in the Bank of France. The Souvenir King had already stuffed his pockets full of banknotes and packed another million Francs in a set of suitcases. Unable to press charges against an Australian soldier, the Brits turned him back over to the Aussies. Hines later boasted that, while the heist cost him 14 days’ pay, he had been allowed to keep the loot stuffed in his pockets.

Hines wasn’t invincible though. At Passchendale, he was the only survivor of a direct hit on his Lewis gun nest. Despite being thrown 20 meters and having the soles blown off of his boots, Hines crawled back to his gun and returned fire until he passed out from his leg wounds. At Villers-Bretonneux, Hines threw a trench party catered with champagne and tinned delicacies that he had looted. He and his friends even dressed up in top hats and dress suits. Take a wild guess as to how they got their hands on those. However, following the party, Hines was wounded above his eye, in his leg, and received a whiff of deadly gas. Despite his protests, the wounded and nearly blinded Souvenir King was taken to a hospital at Etaples.

Still, Hines continued to display unusual bravery and valor. A few days after he was admitted, the Germans bombed the hospital and caused over 3,000 casualties. During the bombardment, Hines crawled out of bed and found a broom for a crutch. Despite his own injuries, Hines spent the entire night carrying the other patients to safety. After the war, Hines was invalided and returned to Australia.

He lived in a lean-to made of cloth bags on the outskirts of Sydney. The lean-to was surrounded by a fence on which he hung his various souvenirs. He lived off of his Army pension and worked various odd jobs. However, Hines found renewed fame in the early 1930s when several magazines and newspapers published stories about his wartime exploits and current living conditions. Several veterans sent him money and the government doubled his pension. Still, the Souvenir King remained humble, donating a suitcase of vegetables from his garden to fellow soldiers being treated at Concord Repatriation Hospital in Sydney.

When WWII broke, despite being in his 60s, Hines volunteered for combat. When he was rejected, he tried to stowaway on a troop ship before his was found out and returned to shore. Hines died on January 28, 1958 at Concord Repatriation Hospital. The legacy of the Souvenir King lives on in the famous photo of him surrounded by his loot at the Battle of Polygon Wood.