Glen Powell is becoming a household name in the Hollywood film industry. In this interview, he shared his experience with 'Devotion'. 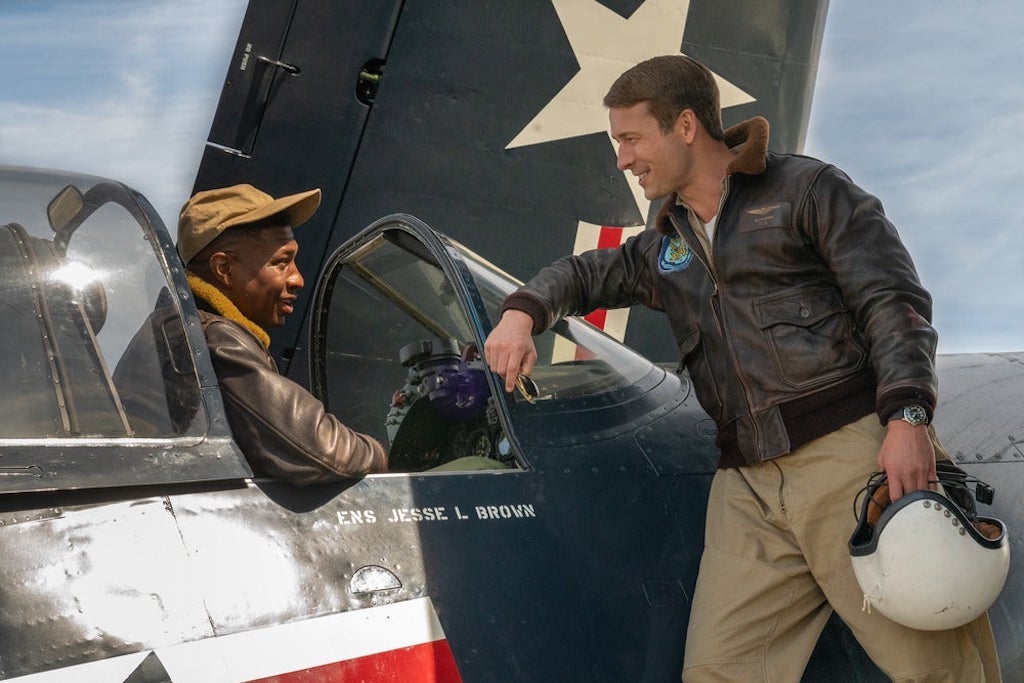 Glen Powell is becoming a household name with his recent successes in the Hollywood film industry. You will know him from his work with Devotion, Top Gun: Maverick, Hidden Figures, The Expendables 3 and The Dark Knight Rises. Devotion tells the powerful and timeless story of the first African-American Naval Aviator Jesse L. Brown, portrayed by the talented Jonathan Majors. Powell plays Thomas Hudner, Brown’s wingman, close friend and Medal of Honor recipient. Powell hails from the great state of Texas and brought his Lone Star charm to the interview. He shared his experience with Devotion and the great things he learned through the process.

The Aviation of a Forgotten War

Take a deep dive into the world of 1950s U.S. Naval aviation and experience the epic aerial action brought to life in Devotion. Meet the actors in real planes used during the Korean War in this incredible behind-the-scenes look at the making of the film.

The Legacy of Jesse Brown

Discover the extraordinary life of Jesse Brown, the first African American Naval Aviator, and explore his personal journey during the Korean War. In this link, hear from the cast and crew as they discuss Jesse’s unique and complex story.

WATM: Can you share your experience in getting the book rights for Devotion to adapt it into a feature film?

I’d heard about the book through a friend. My uncle and my dad were both reading the book on a fishing trip I was on…It wasn’t a best seller. It is now. At the time it was a little-known book and little-known story. I read it and was immediately taken with the story. Not only do I feel like the Korean War is such a forgotten war in so many ways, my grandfather served in the Korean War…I always felt there was a disconnect because people have such a great visual reference for World War II but have very little visual reference, [or] cinematic reference for the Korean War and therefore you don’t have a strong emotional connection to it. That made me lean in in a big way. I thought there was a huge opportunity to show a war that….I’d never seen this in modern storytelling, but also in this friendship. This friendship between Jesse Brown and Tom Hudner….it summed up how I feel about not only the greatest friendships ever, and the greatest love stories ever, but how far we are willing to go for our friends. How far we are willing to go for our wingman, our allies. For me, it’s the spirit of the Navy and our men and women in uniform…

I realized very quickly as I was trying to set this thing up that certain people in power within the town (Hollywood) didn’t really like the ending. Well, that’s what happened. It was really an uphill battle to get this movie made on so many fronts. Not only that, but [at the time] I’m an unknown quantity, [as was with] Jonathan Majors…now we’re both kind of finding our way in town. But at the time…you said both of our names and no one knew who you were talking about. When I found the book, the thing that really drew me to it was the spirit of this friendship. I brought it to Frederick W. Smith (founder of FedEx and Marine Vietnam veteran), who in my opinion is the greatest American. He has done more for humanity and for our men and women in uniform than anybody I know. [He does] these silent acts of graciousness and generosity that no one will ever know about. He’s a spectacular human being. He really knows why this story is so special…We sat down and talked out the story…why I connected to it and why he connected to it through his service…as a Marine in Vietnam.

All the things that made it complex…that other people looked at it as cons, we looked at as opportunities. Opportunities to make this movie differently, to make this movie resonate in a way no one has ever seen. Every step of the way Mr. Smith was such a champion of this project. The entire Smith family poured so much of themselves and their resources into making sure this movie was told in the biggest, best possible way. I’m really proud of what it became because it’s… it’s not a movie that was made by Hollywood. This is a movie that was really made outside of the system and with love and authenticity…The one thing that I am really proud of is that at every turn, every fork in the road we always took the authentic truthful route to do service to those individuals and our veterans, especially our veterans. It’s a sad reality, but a lot of people don’t know what the Korean War was about. [They] don’t know what those veterans did over there. That was always my intention to really change the conversation around that. The “thank yous” from service members really do mean a lot when it comes to this movie.

WATM: If you could say anything to Jesse L. Brown, what would it be?

You’re not alone. He was the first. He was not the last. There have been a lot that have come after him. He has inspired a lot of people over his life and legacy. The beautiful thing that makes this story so unique is that the legacy of these two families, Tom and Jesse, were great friends over 70 years ago. Now here we are in 2023 talking about their friendship, that their families still spend holidays together, that they’re still friends, and they’re tied together forever. That legacy is still intact. The way that Jesse has continued to inspire is still intact. I feel that is a beautiful thing. We haven’t forgotten about Jesse, [as] Fred Smith, and Team Jesse, we are still working with DC, and the White House to really get Jesse home from North Korea. We’ve had a couple of attempts at it. I’m hoping the stars align for us to get Jesse and bring him and bury him in Arlington to give closure to the whole Brown family.

It doesn’t stop at the box office. It doesn’t stop with the audience in the theater. We are now getting to show the world on a different platform, but I’m really hoping for more eyeballs and more action to bring Jesse home. That’s the effect of this movie and I feel like movies can really change the world. Change the family and change the course of a legacy for a family. More eyeballs, more action.

WATM: Can you share about your relationship with Tom Hudner?

I talked to Adam Makkos who wrote the Devotion book and I told him I would really like to turn this into a film. He said, “Would you like to meet Tom Hudner?” I said, “It would be my honor.” …So I drove to Concord, MA and spent time with Tom and his family. It’s so wild looking back on that moment because I was just a guy who was so excited to meet a real hero at that point and really saw an opportunity to bring a movie to the screen but I was unaware of this whole journey I would go on with both these families. That I would be forever tied to the Hudners and the Browns….that we would succeed. I made promises I was just hoping I could fulfill. It was a beautiful thing to watch him discuss the legacy of what this moment was looking back on talking to Tom and the way his eyes lit up when he was talking about Jesse. How clear his thoughts were when he was talking about the Corsair and the 32s.

…Tom attempted an action and failed to save a friend and that has become so emblematic of his life. The most heroic thing a friend can do for another friend, a wingman can do for another wingman, and yet it ended in tragedy. There was something very clear in hearing him talk about his relationship with Jesse that really for me sparked what this friendship was, they were soulmates. Their friendship was written in the stars and this legacy would continue. Just like I’m sitting in Concord, MA asking this man to tell his story, [I] had no idea of the journey I would go on with this movie, Jesse and Tom had no idea this friendship would permeate 70-plus years from now and the families would continue to talk and that their story would inspire millions….we never know if the life that we’re living and the legacy that we are leaving can be a legacy and inspiration for other people.

That was something that really struck me when I remember having waffles with Tom that morning. I remember feeling like…it was a beautiful moment to sit down with him. I feel so lucky to have got to meet him and to know him…he was so smart, and very thoughtful about all this stuff…he really did think about the elements about it and was…very introspective. As an actor, to get not only…to just meet the man but to understand the man. To get a peek inside of his soul and what all this meant to him really informed the movie in a massive way.

WATM: Was there anything else you wanted to share?

Tell everybody about this movie. I feel like this movie is just so good for the world and everybody that has seen it has responded so positively about it…When I’m all said and done and I kick the bucket, hopefully, many years from now and this is going to be one of those movies I’m really proud we got to out in the world.