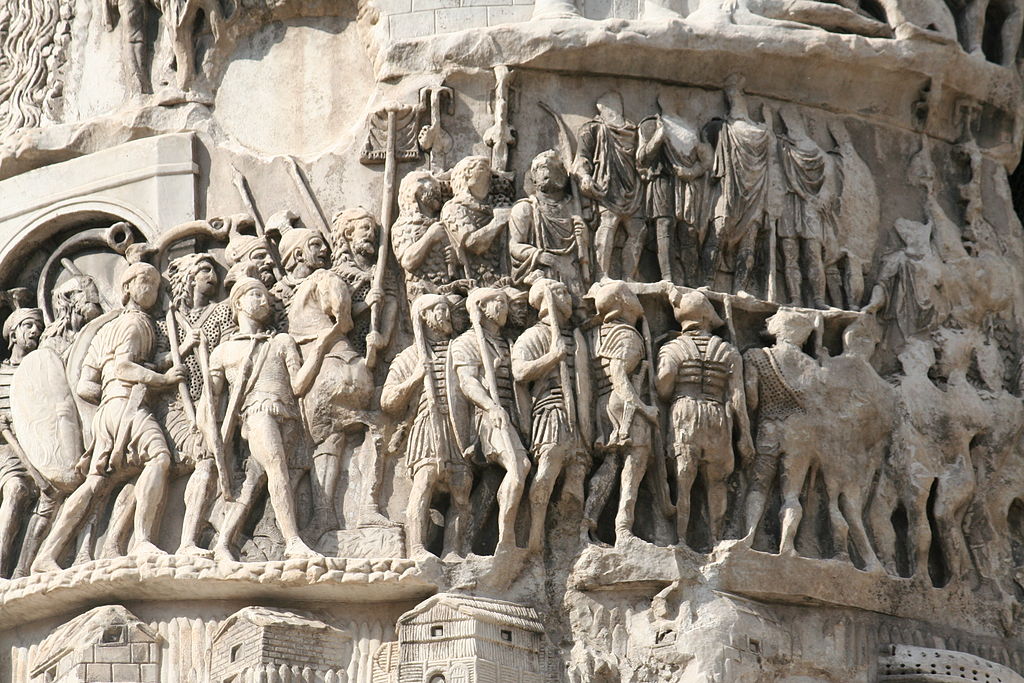 Detail from the Column of Marcus Aurelius in Rome. (Public domain).

In the history of warfare, currency is the best way to compensate an army for braving the fires of combat. Just like today, a warrior must also weigh the pros and cons of the life of a professional warrior. Feeding a family, housing, and retirement are real issues for a soldier at any point in history. Our own military makes addressing those issues key reasons to join. Uncle Sam also throws in the G.I. Bill and so many benefits and privileges for those who serve their contracts with honor. The U.S. wants troops that are worth their salt, which is exactly how Rome paid their legions.

When you hear of salt, you most likely reflect on the most commonly used food seasoning. Salt was once a precious commodity and was even used as a payment method. For instance, Roman troops received some of their pay in salt. It is claimed that this is where the name soldier, which means to provide salt in Latin, comes from. We also obtained the term salary, or “salarium,” from the same derivation. The value of salt was renowned since it was a rare and valuable item. Before the invention of the refrigerator, salt was employed in the preservation of meat and fish. Roman soldiers accepted it as payment because of this but also accepted other forms of payment. There were things that salt could not buy; therefore, other payments were also given.

British salt production was well-established before the era of the Roman Conquest at a number of coastal locations as well as at the interior saline springs in Cheshire and Worcestershire. The establishment of military salt factories satisfied the need for salt, a crucial supply for the Roman army. At the interior locations, making salt out of the evaporation of mildly salty sea water needed significantly more energy and time than using the fully saturated organic brine.

By 60 AD, the Roman troops had advanced into Cheshire and erected military outposts. Chester served as a military stronghold and a port for supplies, making it easy to take over North Wales. A fort was constructed at Middlewich on a protective bluff over the River Dane, and it served as a command center for the major military route north. Between the army command center and the location of the pre-existing Celtic salt-making hamlet in Middlewich, the Romans built their saltworks to supplement their needs.

The salt obtained from these locations was used to pay some of the troops’ wages. Salt played an important role in keeping the soldiers in good shape. Troops that lacked the commodity would often suffer death due to salt deficiency. The Roman troops received a handful of salt as recompense for their daily labor. This is the root of the proverb “being worth one’s salt.” The salt allowance also increased with each subsequent rank.

As much as salt was a precious commodity, it was not the only form of payment for troops. Cash is king and in the case of the Romans, gold. Roman politics were at times the literal interpretation of cloak and dagger. Anyone, scholar or not, who could afford an army could be very political. However, history has shown time and time again that money alone is not enough to win wars.