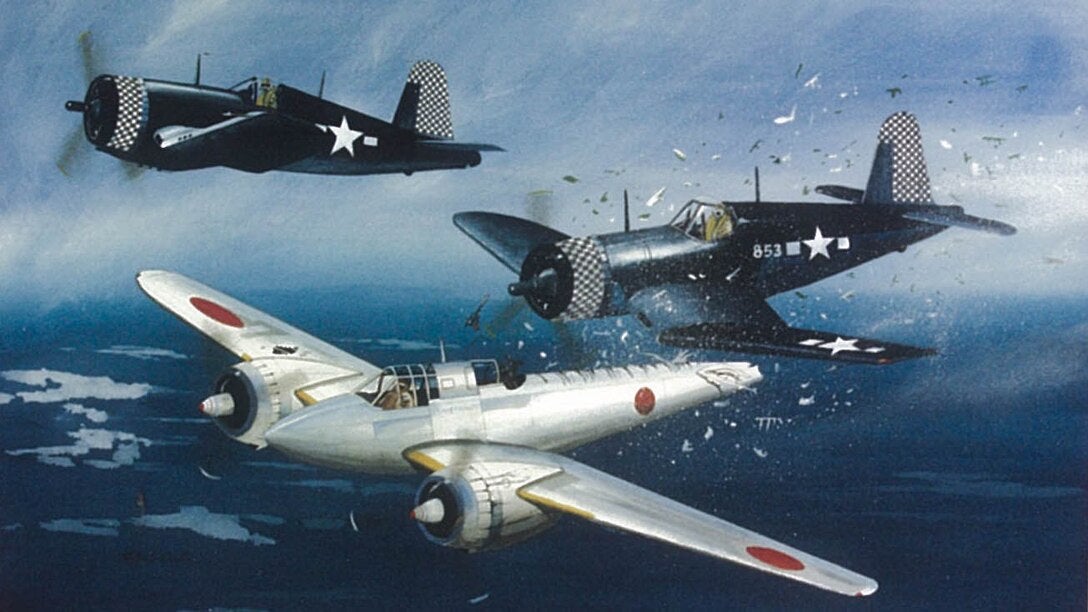 The F4U Corsair was, without a doubt, the heavyweight champion of the air war over the Pacific Theater of World War II. It originally had a lot of design problems to work out to be a carrier-based aircraft, but the Navy and Marine Corps still flew it from land-based airfields to devastating effect.

It was a plane known as “Whistling Death” to the enemy and “The Angel of Okinawa” to United States Marines. With a Marine pilot at the stick, there seemed to be little that the unconventional bird couldn’t do, which included taking down enemy aircraft without using its onboard weapons systems.

By the time the United States and Japan were duking it out in the Pacific, Robert Klingman was already a salty Marine. He had joined the Civilian Military Training Program during the Great Depression, learning the ins and outs of military life at Fort Sill, Oklahoma. When he finished there, he enlisted in the Marine Corps and sent his paychecks back home.

After his four years were up, he went back home and opened a successful diner, but found himself bored with the life of flipping burgers, even if he owned the place. His brother suggested he return to the service, this time to join the Navy. He did, and he was assigned to the USS Tennessee and sent to San Diego for further training.

The day Klingman arrived in California, the entire world changed. It was December 7, 1941. He doubled his training efforts and qualified for preflight school. The Navy discharged him as an enlisted man and he became an aviation cadet. He was much older than the other cadets, but he worked hard to succeed and when graduation time came, he was forced to choose between the Navy and the Marine Corps.

He chose the Corps and was sent to Okinawa, where Japanese kamikaze squadrons were wreaking havoc on American ships. But Robert Klingman noticed a funny thing: Japanese reconnaissance planes would make two full passes of an island or fleet before coming home. They were taking photos and assigning kamikaze pilots to individual ships.

Klingman was going to down those enemy planes, but first he had to catch them. They were Kawasaki Ki-45 “Nick” planes that could fly higher than anything the U.S. could fly or shoot at them. The Marines hatched a plan and were airborne, ready for the next “Nick” recon flight.

At 13,000 feet, four Corsairs, one flown by Klingman, ditched their drop tanks and ascended to 20,000 feet in anticipation of the Japanese spy plane. Upon seeing the enemy, they fired off some .50-caliber rounds to lighten their plane. Klingman shot 2,000 rounds. They all started to ascend higher. That’s when two of the Corsairs began to freeze up and had to head home.

One of them fired some shot at the enemy, alerting it to their presence. Its second round finished, it took off for home. Klingman, flying the faster plane, went full throttle in pursuit. At 38,000 feet, well above its service ceiling, and with the Nick in his crosshairs, he pulled the trigger.

Nothing happened. His guns had frozen. An hour and a half-long hunt was almost for nothing. Then, Klingman told his wingman, “I’m going to hit him with my plane.”

Klingman pulled up behind the Japanese plane trying to close with the tail. He pulled up and brought the propeller down on the Nick’s tail, tearing it up. The tail gunner of the Nick finally started shooting. With bullets ripping through his Corsair, Robert Klingman sawed through the enemy’s rudder, chopping it off.

But Klingman wasn’t finished. He got a second strike on the Nick and as the machine gunner turned to Klingman’s wingman, it tore open the enemy plane and sent the gunner flying out. His third strike cut off its tail, sending both planes down in a spin.

But Klingman was flying the mighty Corsair and managed to recover. He ran out of fuel at 10,000 feet but still managed to coast the F4U onto the airstrip runway. For his daring midair butchering of the enemy plane, he was awarded the Navy Cross.