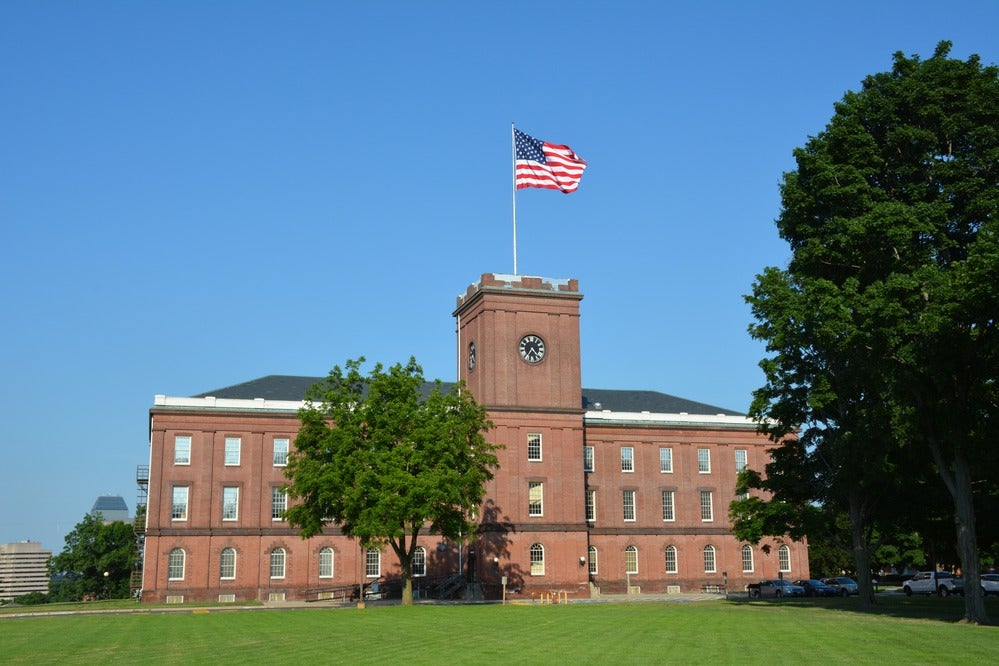 When people think of American firearm manufacturers, legendary names like Colt, Smith & Wesson and Springfield come to mind. However, the modern firearms that today’s Springfield Armory makes like the M1A, SAINT AR-15s, XD pistols and Hellcat sub-compact pistol have little, if any, relation to classic American firearms like the M1903 Springfield and M1 Garand rifles that served in the World Wars. To explain, we have to go back to America’s fight for independence.

In 1777, George Washington was searching for a suitable location for an arms repository. General Henry Knox, chief artillery officer of the Continental Army, recommended Springfield, Massachusetts. Though the town was small and possessed little industrial capacity, it was not meant to host any sort of firearms manufacturing facilities. Rather, the Continental Army needed a central location to store and distribute firearms and munitions throughout New England. Springfield lay at the intersection of three rivers including the Connecticut River and four major roads that led to New York City, Boston, Albany, and Montreal. After scouting the site, Washington approved the location and the Springfield Armory was born.

Although the armory did not produce any firearms, musket cartridges and gun carriages were produced there to support the war effort. As intended, the armory continued to stockpile and distribute muskets, cannons, and other weapons throughout the war. By the 1780s, Springfield Armory was America’s premiere ammunition and weapons arsenal. This made it a prime target for Revolutionary War veteran Daniel Shays and his Regulators.

Burdened by debts and taxes from the war, Shays and other veterans felt betrayed by the government that they had fought to establish. In an effort to overturn it, Shays and his followers marched on Springfield Armory on January 25, 1787. The armory was defended by state militia who fired grape shot at the rebels, forcing them to flee. Four Regulators were killed and 20 were wounded. The rebellion was routed and eventually put down and the armory was untouched.

In 1794, construction of manufacturing facilities began at Springfield Armory. The next year, the armory began producing its first firearms. Though the it employed just 40 workers and produced 245 muskets, it was the start of American national firearms manufacturing. Congress would later establish a second national armory at Harpers Ferry, Virginia (now West Virginia). However, Harpers Ferry would never grow to match Springfield and would be destroyed during the Civil War.

Throughout the 19th century, Springfield became a hub for firearm design, research, and production. This national armory model mirrored European nations who had dedicated facilities that were funded, maintained, and operated by the government. Under this model, military firearms like the Trapdoor rifle, M1903 Springfield, and M1 Garand were designed and primarily built by the Springfield Armory. Though private companies like Winchester and Remington were contracted to produce rifles during wartime, the manufacturing processes and procedures were all developed and standardized by Springfield.

By WWII, Springfield Armory had over 15,000 employees and was producing a majority of military firearms. However, employment and production was scaled down significantly after the war. Though Springfield did develop and build the M14 to replace the M1 in 1959, U.S. defense policy was changing.

The idea of maintaining a national armory at the expense of the tax-payer was brought into question in the 1960s by then-Defense Secretary Robert McNamara. He believed that it would be more economical to contract private industry for the design and manufacture of military firearms. Rather than having to constantly scale a national armory between peace and wartime, private companies could be lobbied and compete for government contracts when necessary. Under McNamara’s guidance, the Springfield Armory was slowly scaled back.

By 1968, Springfield Armory was completely shut down. Future rifles like the M16/M4 were designed and built by private companies like Armalite, Colt, and FN. However, just a couple years later, the Springfield Armory name was trademarked by Elmer Balance. Through his Texas-based company, LH Manufacturing, Balance had the idea to build a civilian version of the military M14 rifle and market it with the Springfield name. Using surplus M14 parts, Balance created what we know today as the Springfield M1A.

In 1974, Balance sold his entire enterprise, tooling, trademarks, and all, to the Reese family in Geneseo, Illinois. Springfield relocated from Texas to Illinois where it remains today. Though the M1A is a derivative of the M14 that was designed and manufactured by the original Springfield Armory, the rifle is the closest relation that the modern Springfield Armory has to its Revolutionary War-era namesake.

Despite this, Springfield Armory, Inc. maintains the federal logo of two crossed cannons with a cannonball and the writing “Since 1794”. Moreover, many of the company’s firearms are sub-contracted to other manufacturers including the XD pistol series and Hellcat pistol which are made in Croatia.

Today, the actual Springfield Armory facility in Massachusetts is owned and maintained by the National Park Service as a historic landmark. Though the national Springfield Armory is gone, its impact on American history is undeniable. In addition to designing and building war-winning weapons like the M1903 and M1 Garand, Springfield also revolutionized the manufacturing industry with innovations like interchangeable parts and the Blanchard lathe. The national armory also introduced modern business practices like hourly wages. While the modern private company is a cornerstone of the American firearms market, it’s important to note the difference between it and the national armory that it draws its name from.