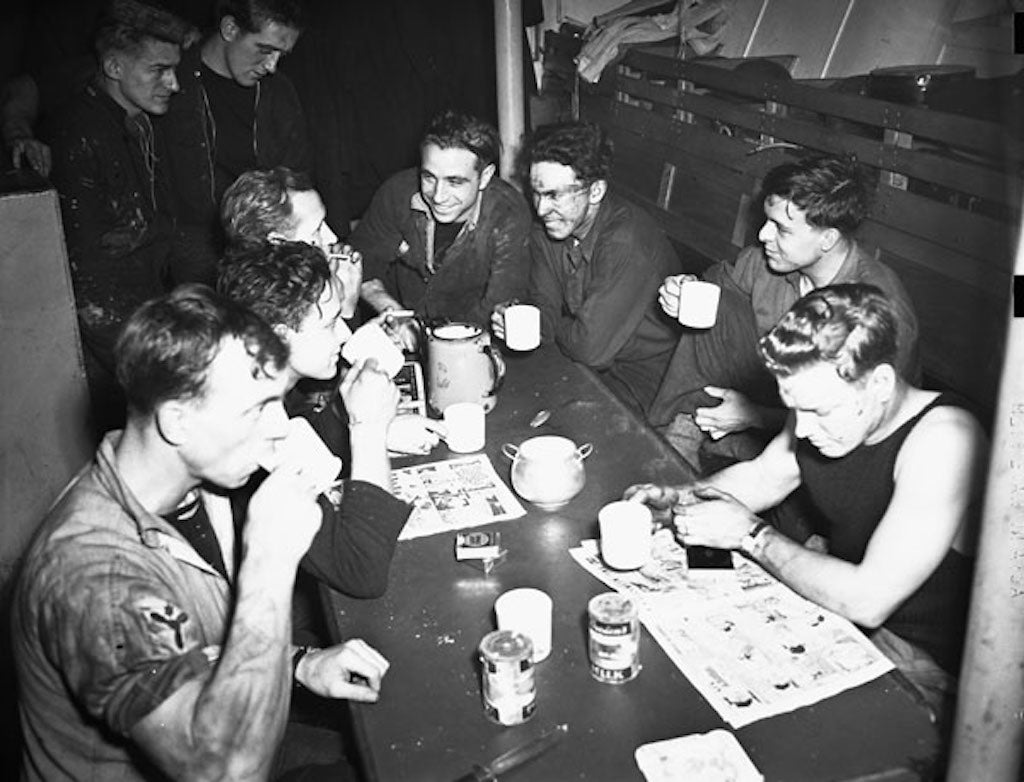 Stand easy in the stoker's mess of the corvette H.M.C.S. KAMSACK.

When an individual is deployed in a warship, they expect to eat stale, canned and highly processed foods, as the ocean surrounds them with no food source. During the first world war, Navy sailors ate a vast array of quality foods, but the methods of storing these foods were quite obsolete. In the early 1940s, numerous governments immersed themselves in curtailing the consumption of time-sensitive foods by troops.

To promote the effort, the governments organized various commercial food firms all over the countries to assist in making new food rations and developing modern methods of food preservation. Through time-insensitive foods, the navies were able to be ready at all times, avoiding last-minute deployment issues and preparing for future wars while still on board. The firms and their scientists came up with various ration names according to where a team was deployed, such as Ration Tropical, to cater to all troops regardless of their services.

Rationing was one of the strategies employed by various governments and kingdoms to ensure a consistent supply of foodstuffs to the navy at the battle. During World War II, fish was one of the commodities that were regularly accessible. However, the British were not ready to get rationed portions of fish. So, the British government guaranteed adequate stock, hence a steady supply of fish for its citizens and its soldiers. Timed fish was a common commodity for American sailors, primarily due to government efforts to produce time-insensitive foods. The tuna fish was one of the most canned fish and was different from anything fed to sailors at the time. Canned tuna was a successful innovation as it ensured that the sailors got food with edibility, flavor, and the right texture while still providing nutrition. Lets face it, even nowadays the tuna MRE is one of the best ones.

Energy is one of the vital things that the navy often needs as they proceed into a battle. Military chocolate was issued to the sailors to boost morale and high energy. The chocolates were portable, high in energy, and endured high temperatures that made normal chocolate melt. The most renowned military chocolate was the Ration D bar, which weighed approximately four ounces, was calorie-dense, and resisted high temperatures. The purpose of military chocolate was not to be a dessert, as soldiers would eat them when they were not in need. As they did not have an award-wining taste, sailors preferred putting them into drinks and hot water or trading them ashore for food.

Foods can be a political subject and aspect, especially during wartime, as countries seek to be self-sufficient. Potatoes were one of the main staple foods of most armed forces throughout World War II. The British government ensured a constant supply of potatoes for both its citizens and soldiers by urging households to grow potatoes. A constant supply of potatoes enabled the government to supply the sailors with adequate healthy food that satisfied their calorie demands for battle. It would also diminish the country’s dependence on food imports, whose transportation could be curtailed by enemies.

Amid World War II, grain and potato harvest in the Soviet Union had decreased to 1/3 of the pre-war harvest. As a result, the Soviet officials in Ukraine encouraged its citizens to plant more potatoes as they were easy to cultivate in the small pieces of land. Potato production was also intense in Germany as the Nazis plowed money into plant breeding programs that focused on developing and producing potatoes that were resistant to diseases. Besides, the Nazis sought to promote and establish nutritional freedom; hence, they dissuaded the Germans from consuming foods such as butter, bread and meat. Therefore, the Nazi government focused on German diets mainly based on potatoes and brown bread.