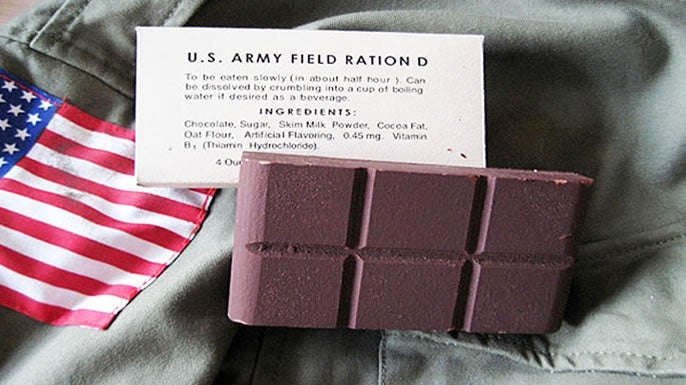 When the U.S. Army quartermaster called on Hershey’s chocolate to create a chocolate bar designed especially for the military, it had very specific specifications. One of these might have seemed at odds with the way most people think about chocolate, but there are a lot of things about military service that defy common expectations.

Called the D-Ration, the chocolate bar was intended to be an emergency source of calories for American soldiers deployed overseas. So it had to be lightweight, high in calories, and able to withstand higher than normal temperatures when carried.

Naturally, as an emergency ration, they couldn’t have troops breaking into these things when not in an emergency, so the last requirement was that it taste “just a little better than a boiled potato.”

Hershey’s current offering would not pass the temperature test, so the chemists at the corporation got down to business. Using chocolate liquor, sugar, skim milk powder, cocoa butter, oat flour, and vanillin, they created a chocolate bar that was roughly the weight of two C batteries but packed 600 calories. To make it less tasty, they used less sugar and more liquor.

The resulting chocolate was so dense it wouldn’t melt enough to be poured, so the company had to use molds to form the bars. Quartermaster Capt. Paul Logan approved, so Hershey went about mass producing what would be known as Field Ration D.

After the Japanese attack on Pearl Harbor, the company had to package the bars like any other field ration, protecting them from the effects of poisonous gas. They were stored in sealed cellophane, packaged in cardboard boxes, dipped in wax, and shipped in a wooden case boxed with steel nails.

Producing the chocolate bars for the military might have saved Hershey’s chocolate entirely, as the federal government considered shutting down the entire U.S. candy industry as a nonessential business and rationing sugar and cocoa for the war effort. Milton Hershey was able to show the D-Ration as proof that his business was supplying vital calories for the American troops fighting overseas.

He was definitely making the chocolate, as records show billions of the bars were produced between 1939 and 1945. But the troops weren’t exactly loving them. This was the intent, of course, but having to carry whatever they needed to fight in the field, a disgusting “chocolate” bar wasn’t going to top the list. Most troops would ditch the D-Ration for a decent kind of ration or, better yet, more ammunition.

When they did take the bars with them, they found them almost inedible. Soldiers with poor teeth couldn’t chew them and those with good teeth had to whittle slices off the bar to consume. Those who tried to eat the chocolate bars began calling them “Hitler’s Secret Weapon” because it absolutely wrecked their intestines – a situation today’s U.S. troops often refer to as “bubbleguts.”

It stands to reason that, with flavor being an important sticking point for the Army quartermaster, Capt. Logan did eat some of the bar before approving them for mass production and consumption. Logan may not have had the same bubbly reaction in his gastrointestinal tract later experienced by the troops deployed in World War II.

This is why some soldiers evolved trust issues when it comes to Army food.