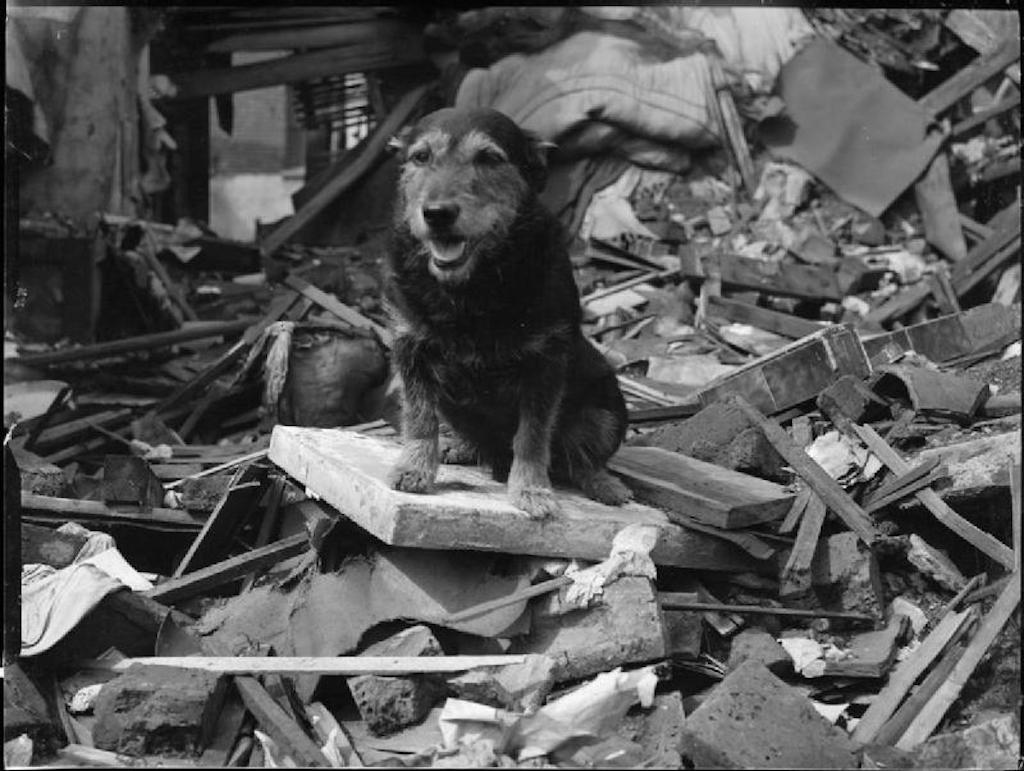 The terrier personality is one of a lone hunter who has no need for other dogs, but is fiercely loyal and dedicated to humans. They were also bred to dig up burrows of small animals, which is probably why a stray little terrier named Rip was found digging through the rubble of London in 1940.

Between 1940 and 1941, London and other British cities were enduring the Blitz, their name for the German bombing campaign that was meant to crush the kingdom’s morale during World War II, and entice them into a separate peace with Nazi Germany. The plan failed of course, and the bombings continued.

During the day, the Royal Air Force (RAF) and German Luftwaffe battled it out in the skies for air supremacy. By night, German bombers his cities and industrial centers, including civilian targets. In the morning light, Britishers awoke to find new areas of their towns and cities in pieces. They immediately went to work to find the injured and dead while clearing the rubble.

It was following one of these air raids in the Poplar area of East London that an Air Raid Precaution Warden named E. King from Air Raid post B132 discovered a stray dog digging through the rubble itself. King adopted the dog, named him Rip, and made him the mascot of Southill Street Air Raid Patrol.

Rip was not a trained search and rescue animal, but his breed’s instinct made him a natural at the task. While the rescue crews were looking for survivors in the aftermath of the bombings, Rip went along with them, and eventually began finding survivors on his own. Rip would pause in front of an area to let King know there was someone still alive down there. The little terrier’s efforts are believed to have saved at least 100 people.

The little dog was already older when he was adopted by the Southill Street Air Raid Patrol, but he served throughout the remainder of five years of World War II. In 1946, Rip suddenly became very ill, an illness that took his small but mighty life two years later. Before he died, he was awarded the Dickin Medal, an award initially designed for animals who served the United Kingdom during World War II.

Often referred to as “the animals’ Victoria Cross,” in reference to the UK’s highest military award for battlefield valor and gallantry, it was revived for service animals in 2000. Since its introduction, 74 have been awarded. During World War II, it was bestowed upon 32 pigeons, 18 dogs, 3 horses, and a ship’s cat, all between 1943 and 1949. Hertz, a German shorthaired pointer who served with the RAF Police in Afghanistan was the most recent recipient.

According to the BBC, Rip’s efforts during the Blitz prompted British authorities to officially train dogs as search and rescue animals.

In April 2009, Rip’s Dickin Medal was sold at auction by Spink’s Auction House in Central London for £24,250, nearly $30,000. Before that, the most the auction house sold a Dickin Medal for was £9,200 – more than $11,000. That medal was awarded to Commando, a pigeon who delivered messages for the French Resistance to the Special Operations Executive during World War II.