The complete guide to Navy bases - We Are The Mighty

The complete guide to Navy bases 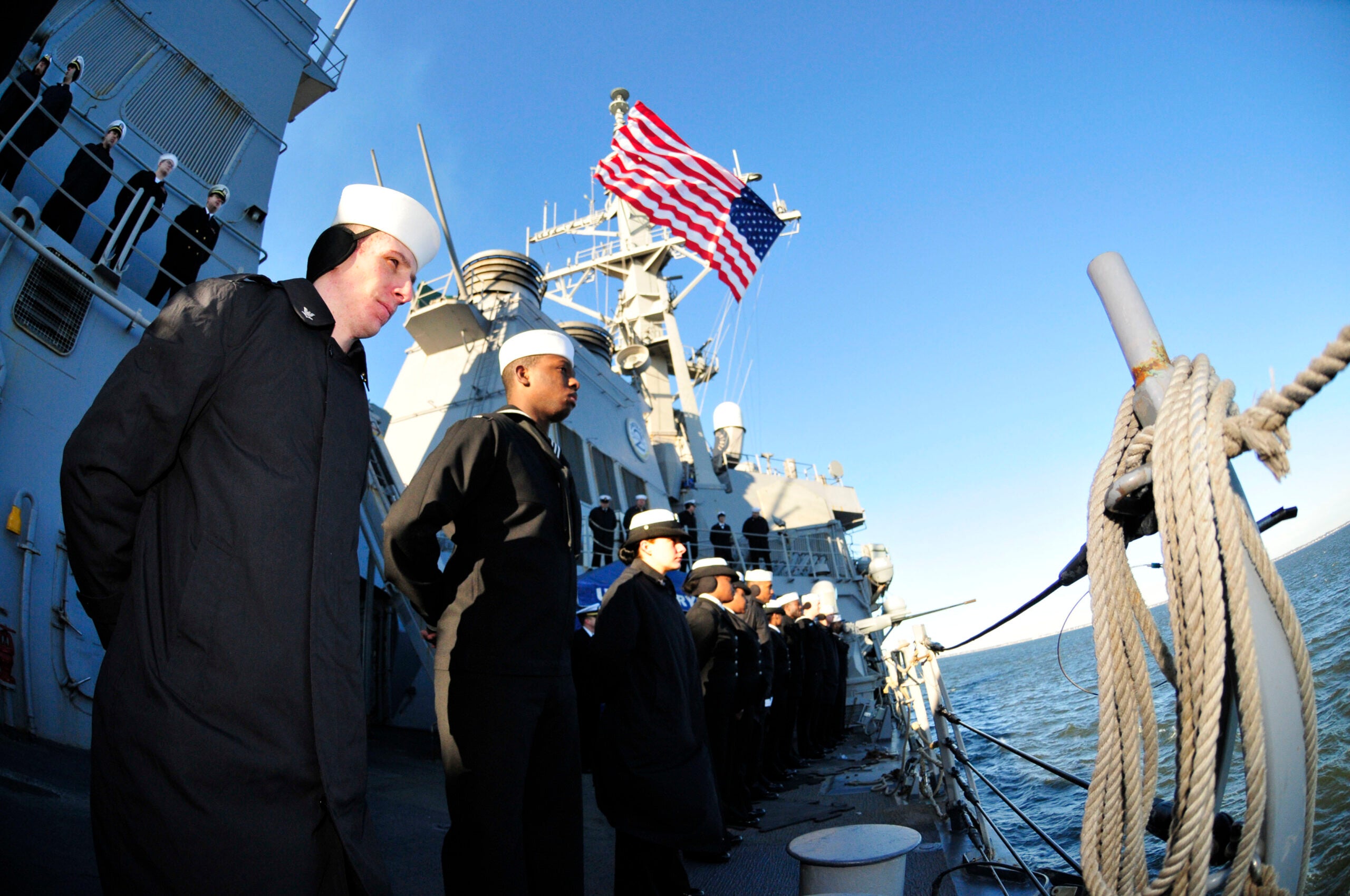 Looking for info about Navy bases around the world? This guide is for you!

A Brief History of the Navy

In 1775, America’s first Continental Congress voted to outfit two sailing vessels with carriage and swivel guns. Their mission was simple – disrupt British supply ships and intercept transports carrying munitions. This was a major decision for the Continental Congress, since we’d only been fighting the British since the spring of 1775. Some viewed the move as too bold, but others, like John Adams and George Washington, knew that if America was going to gain its independence, we’d need to be able to defend ourselves.

And so, the Navy was born.

It quickly grew into a formidable force. During our War of Independence, the Continental Navy sent more than 50 armed vessels to sea. Squadrons and cruisers destroyed enemy vessels, capturing nearly 200 British ships in the process.

Since then, we celebrate the Navy’s birthday in October and honor not only the sacrifice of today’s Sailors, but the fortitude of those first members of the Continental Congress who looked at the open seas as a challenge, not a defeat.

These days, you’ll find Navy installations all over the country and the world, from Florida to Michigan, Spain to Bahrain.

Where are Navy bases located?

The Navy maintains bases everywhere. As of mid-2021, the U.S. Navy maintains 82 primary activities, stations, and bases. Some of the most well-known Navy bases include the following.

NSA Bahrain is one of the Navy’s youngest installations. Back in 1971, the Navy moved onto a ten-acre shore facility once occupied by the British Royal Navy. Then, eight years later, the name changed to the Administrative Support Unit Bahrain. In 1997, the installation expanded both its facilities and its size and became known as a Naval Support Activity base. These days, it’s home to the U.S. Naval Forces Central Command (CENTCOM) and the U.S. Fifth Fleet. Additionally, NSA Bahrain provides op support to U.S. and Coalition Forces operating throughout the CENTCOM area of responsibility. This helps ensure ship, aircraft, and detachment security. As you might expect given the location, NSA Bahrain was also the primary base in the region for activities in support of military operations in Iraq.

Naval Station San Diego is home to more than 60 ships and over 200 tenant commands. The installation conducts various waterfront operations and engages in fleet support. On average, there are nearly 24,00 service members and 10,000 civilian workers supporting the base operations. Base consists of a wet side on the bay side of Harbor Drive and a dry side. Most of the housing is located on the dry side.

The mission at 32nd Street Naval Base is to “deliver the highest standard of support and quality of life services to the Fleet, the Fighter and their Families.”

Washington Navy Yard is the Navy’s oldest shore installation. It’s been in operation since the first decade of the 19th century. These days, the base’s original boundaries are still marked by a white brick wall. During the War of 1812, the installation was a support facility and strategic link to defend the city. By WWII, the yard was the largest naval ordnance plant in the world. In fact, the weapons designed and built at Washington Navy Yard have been used in every U.S. war until the 1960s.

These days, Washington Navy Yard is the headquarters for Naval District Washington. It also hosts support activities for the fleet and aviation communities in the National Capital Region.

This is the Navy’s ONLY boot camp and it’s located on the shores of Lake Michigan, about an hour north of Chicago. Known as the “Quarterdeck of the Navy,” it’s nowhere near the ocean, but for over 100 years it’s been the go-to spot for all new Sailors. In fact, it’s the Navy’s only boot camp! To date, NSGL has trained more than 2 million new Sailors via the Recruit Training Command and tech schools embedded on the installations.

It’s no surprise that Naval Station Great Lakes is all about its Recruit Training Command. There, civilians get transformed into smart, capable Sailors. Embedded at NSGL are more than 50 tenant commands, including the Military Entrance Processing Command, and the Naval Education and Training Command.

After Japan surrendered in 1945, America established the Commander Fleet Activities Yokosuka (CFAY). Then, in 1951, the installation became a key naval ship repair facility. It provided maintenance and repair to U.S. Seventh Fleet ships throughout the Korean and Vietnam conflicts.

Currently, it’s the largest overseas Navy installation. It serves as the headquarters for the United States Seventh Fleet. The 7th Fleet is the largest of the forward-deployed U.S. fleets. Impressively, it includes 60 to 70 ships, 300 aircraft, and 40,000 Navy and Marine Corps personnel. CFAY is also the headquarters for the U.S. Naval Forces Japan/Navy Region Japan. The installation is also home of the Navy’s only permanently forward-deployed aircraft carrier, the USS Ronald Reagan (CVN-76). As if that weren’t enough, the installation hosts 55 other tenant commands that support U.S. Navy Pacific operating forces and principal afloat elements. Read more about the USS Ronald Reagan here.

Norfolk is the world’s largest Navy base. It occupies nearly 3,500 acres around the Hampton Roads area known as Sewell’s Point. Norfolk is the HQ for Fleet Forces Command. It’s also the largest concentration of U.S. Navy Forces. On average, 75 ships and 134 aircraft are home-ported at Norfolk. An average of 275 flights take off per day – that’s one every six minutes. Naval Station Norfolk’s mission is to support and improve the personnel and logistics readiness of the U.S. Atlantic Fleet. The Norfolk naval base provides seaport, airport, and squadron facilities, quality of life, and personnel management services.

Norfolk is home to four Carrier Strike Groups (Two, Eight, Ten, and Twelve), four Destroyer Squadrons (2, 22, 26, and 28), and Submarine Squadron 6. Heading to Norfolk? Check out our guide so you have an idea of what to expect.

Wondering about other Navy bases? Here are the top five that should be on your next PCS wish list!

Heading to Basic Training? Here’s What to Expect

Navy basic training lasts for eight weeks. During that time, you’ll be expected to endure both mental and physical training. You’ll also need to develop a lot of emotional endurance. In addition to classes, you’ll receive practical training to best prepare you for real life as a Sailor.

When you arrive at the Recruit Training Command Unit at Great Lakes Naval Station, you’ll meet your recruit division command. The RDC is your instructor for the eight weeks of your training. With help from other petty officers, the RDC’s job is to mold you. So expect strict adherence to all the rules.

Week one will assess your physical fitness. It’s a good idea to prepare ahead of time for the physical component of basic training. Get used to doing a lot of push ups and you’ll have an easier time. And, since you’re joining the Navy, it’s a good idea if you know how to swim before you arrive. If you don’t, that’s okay – you’ll get remedial training.

In the weeks that follow, you’ll receive both hands-on and classroom instruction including Naval history, shipboard commands, and other subjects. You’ll learn how to fire a pistol, rifle, and shot gum. During the last two weeks, you’ll conduct a Battle Station simulation that includes everything you’ve learned at Boot Camp.

What are the largest Navy bases?

Norfolk is the largest Navy base in the country.

Is Pearl Harbor still a naval base?

In 2010, Pearl Harbor merged with the Air Force’s Hickam Air Force Base. Together, the installation is called Joint Base Pearl-Harbor Hickman.

Where are U.S. Navy bases located?

U.S. Navy bases are located all over the world!

Where does the Navy do basic training?

Basic training is conducted at Great Lakes Naval Station. Heading there? Here’s our resource guide to help you prepare!