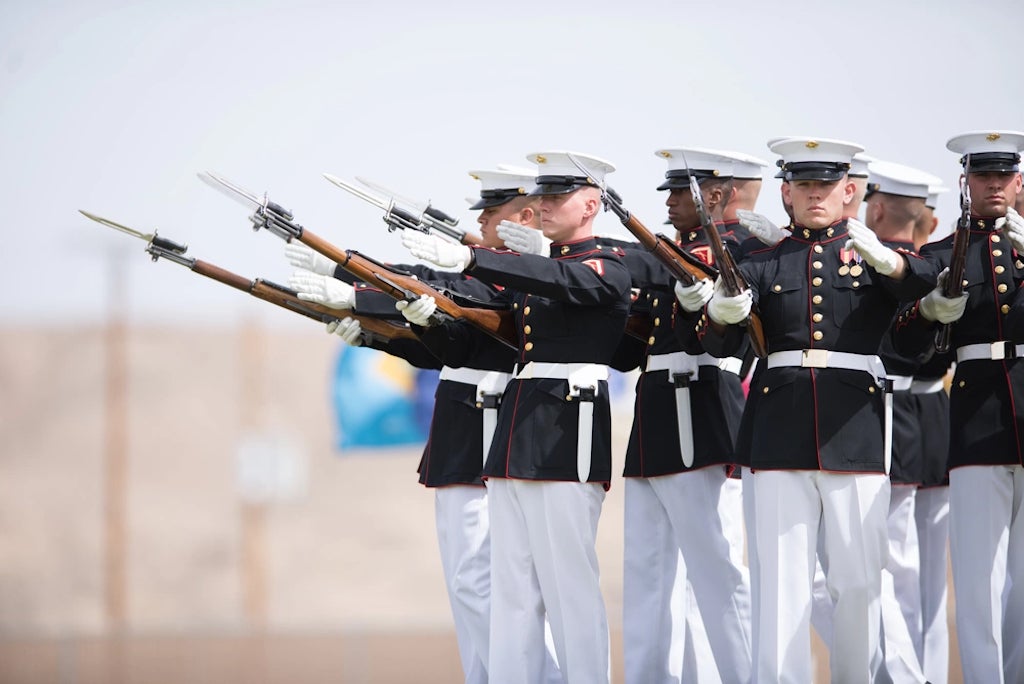 Representing decades of marching and rifle precision, the Silent Drill Platoon consists of 24 men trained to put on a one-of-a-kind perfect drill show. This highly regimented platoon exemplifies the prowess affiliated with the United States Marine Corps. This team’s first performance was first debuted in 1948 at the Sunset Parades, which everyone enjoyed, and they made it a permanent element of the parades at the Marine Barracks. Representing Marines worldwide, the Silent Drill Platoon demonstrates the finesse in Marine professionalism, discipline and esprit de corps.

The silent drill team performs their hand-polished, 10.5 pound M1 Garand weapons with fixed bayonets to undertake a sequence of planned drill moves and precision handling. Every performance comes to a close with a one-of-a-kind weapon examination sequence that includes complex gun twists and throws. For many decades, the Silent Drill Platoon has been entertaining in numerous public appearances abroad for hundreds of thousands of spectators each year. In addition, they perform in place of the Marines on innumerable occasions in the National Capital Area, venerating dignitaries and heads of state. Comprised of Infantrymen, the Silent Drill Platoon executes its drill sequence without verbal command.

How are they selected?

Being a member of the 24-men team is a great honor. Unfortunately, not everyone gets to perform with the Silent Drill Team, as certain requirements need to be met. All members are personally chosen from the two main Infantry institutions. The barracks officials of the respective camps hold assessments and interviews to determine Marines fit for the team.

If they qualify for the team, the Marines are sent to Marine Barracks Washington for a two-year commemorative deployment where they are trained in their different areas. In addition to the precision performance training, the Marines continue with their usual infantrymen training in the field. These Marines spend the entire year at Marine Corps Base Quantico, Virginia, honing their infantry abilities to stay competent. It is unlikely that trained members get kicked out of the team due to a lack of skills. The Silent Drill Team could request replacements from the camps and in very rare cases, including death cases.

Together with the platoon drill commander, they are tasked with preserving and handing over the Silent Drill Platoon’s special expertise and customs. Every fall, the year’s Silent Drill Platoon Marines are chosen to undertake intensive training prior to moving to Marine Corps Air Station Yuma to polish the regime before embarking on a trip to the Corps’ mainland locations.

Thousands of people are allowed to watch them practice their precision performance at the Washington Marine Barracks. Every master of the Marine Corps Silent Drill Team lives at the Barracks with the rest of the members, which serves both formal and security responsibilities. They live as a close band of everlasting brothers. Officials love the performance because it allows the Marine Corps emblem to be exemplified through the Silent Drill Platoon. The US is known for its goodwill and power. They demonstrate the determination and perseverance required to be a Marine, as well as the accuracy with which all Marines approach their work.