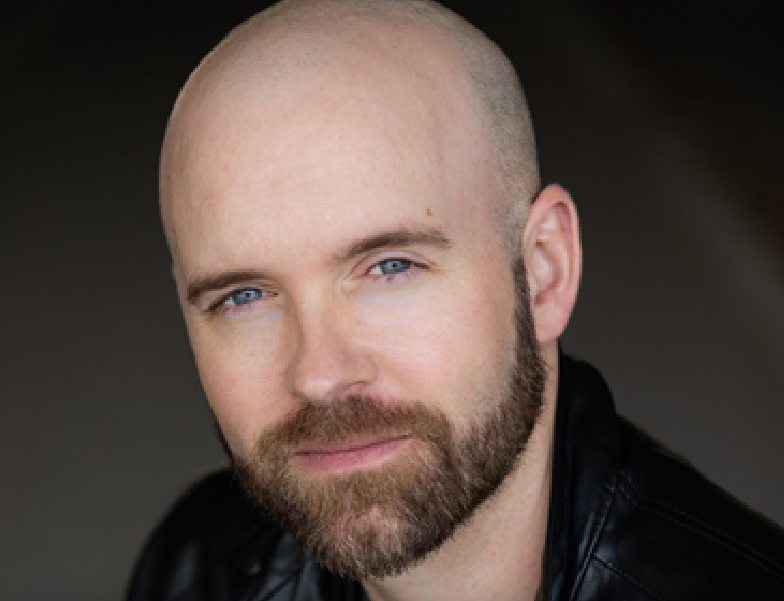 Writer for the “Game of Thrones” and “The Walking Dead” video games and science-fiction novelist Justin Sloan once lived a warrior life in the Marines before following his artistic passions. The former Marine sergeant gives us the skinny on his passion for the Corps, transitions into government finance and then to the world of writing. In a continuing series that features former and retired Marines and their contributions to entertainment, We Are The Mighty asked Sloan to discuss how his past led to the present and to provide learning points he gathered along the way.

Sloan was born and grew up in the state of Washington and he had, “a good childhood.” He went to a public school system and took a lot of the opportunities offered to him. He grew up next to his best friend in school that later joined the Marines with him. He also convinced a few more of his buddies to join the Corps as well and about six of them went off to join the Marines together. He wrote and illustrated comics in his youth and considered being an artist at the time. He was initially informed by a guidance counselor, incorrectly, that the only creative profession he could pursue was as an advertising executive. That didn’t interest him, so he looked elsewhere for a career.

While in high school, Sloan met a Japanese teacher that changed his life forever. In his junior year he signed up for the Japanese course and the teacher turned his life around. He had a less-than-ideal grade point average before taking the class and vastly improved his grades after being in it. The teacher allowed Sloan to take three Japanese classes at one time to include first, second-and third-year Japanese. His mother told him if he got a 4.0 GPA, she would pay for half of his trip to Japan. When he did, although she was surprised, she kept her word. He paid for the other half of the trip working a dishwashing job.

He learned that, “If I work hard, then I can see results, and getting straight As was not that hard. Japan was mind-blowing when I went where they had cell phones in 1999 which America did not. The trip was a big part of me in joining the Marines.” Sloan’s love for the Japanese culture drove him to join the Corps and he specifically requested Okinawa as his first duty station. In preparation for going to boot camp, Sloan, “watched a lot of Full Metal Jacket to get in the right mindset.”

In the Corps, Sloan was a Cryptologic Linguist (MOS 2673). His fluency in Japanese played a large role in getting the specialty and he studied Kung Fu while stationed in Okinawa. Sloan did want to be a “ninja” once he graduated from boot camp and his martial arts training would come later in his career. His job required him to review numbers and codes. He worked with code machines using propeller logic and cards that were fed into machines. That job was phased out, so he was given the MOS of Special Intelligence System Administrators (MOS 2651) and did Special Security Officer (SSO) work, working on clearances for Marines in the unit and determining if they were allowed in the Security Compartment Information Facility (SCIF). His service in Japan was busy and kept him focused on his intelligence specialty.

Sloan was highly interested in studying the Marine Corps Martial Arts Program (MCMAP) and the Marine Corps warrior ethos had been a key motivator for him to join. He became a MCMAP instructor and a Kung Fu instructor. Sloan shared, “MCMAP reinforced the positives of the Corps for me and saved me from not reaching my highest potential in the Marines….the whole warrior ethos training and going over the Medal of Honor winners…it helped motivate us…and MCMAP helped me appreciate everyone in a more professional manner.” He was one of the first Marines in the fleet to be trained in MCMAP as the Corps had just switched from the Close Combat training program. Sloan, “thoroughly enjoyed the warrior ethos training….and was a black belt instructor in MCMAP,” by the time his service ended. He earned the secondary MOS of 8551 – Martial Arts Instructor. He left the Corps to pursue his desire to have a family and be settled in one place. He taught Muay Thai kickboxing for years after he got out of the Marines and he continued pursuing the warrior ethos learned while in the Marines. He trained in Japan, Thailand and Italy in martial arts.

Sloan decided to do professional schooling and he just, “rolled right into the education, which was a lot of fun.” He earned a BA in Japanese from the University of California, San Diego and he studied abroad at Keio University for Japanese and then Kyung Hee University to study Korean for the State Department’s Critical Language Program in Suwon, South Korea. He earned his Master of Arts in International Relations and International Economics from Johns Hopkins. He took his education and worked for the Department of Commerce as a Management Analyst/International Trade Specialist.

During this period, he was a part of the, “…Presidential Management Fellowship Program, which is a fast-track system, which I was invited to join, where it was exciting to participate in…” Sloan was then selected for a position in the Commerce Department called the, “…Post Conflict and Reconstruction for a couple of years where we were basically working with policy…with how the government can go get involved in post-conflict situations and help stability like Sudan and Haiti just after the earthquake….to get the economy moving.” His experience as an analyst led to him working for the Federal Reserve Bank of San Francisco as a Supervisory Analyst and Country Manager. He wrote political, economic and banking analysis papers on Asia while at the bank.

After working at the reserve bank, he decided it was time to go back to his creative roots. “My life came full circle to where when I was 12, I was drawing comics and trying to design a video game with a friend then. We reached out to video game companies and were trying to sell them on it. They responded with, ‘You are like 12 and this is not how we do things.’ (In 2010) I had started writing books about my experiences and adventures overseas seeing the world,” which was based on encouragement by his grandmother. He had just taken a class on the Peloponnesian War, which he used as inspiration for his first book. He wrote his first fiction book on what he had done in a Peloponnesian War setting. He completed it in three months and found out how much he loved writing.

He decided to start down the path of being creative and did a lot of networking. Sloan completed a Master of Arts in creative writing from Johns Hopkins during this period as well. He had conversations with anyone in the field who would talk with him. Through networking, he was able to secure a job with Telltale games in 2014. Telltale was hailed as the “HBO of gaming,” by the New York Times. Sloan said, “They really liked my writing samples and screenplays I had done at that time.” He brought his experience with war games at the Commerce Department into gameplay during his interview.  Sloan credits his experience in the Corps with getting his first job as well. “The experience in the Marines really helped, to where a lot of employers are looking at that past experience and thinking this is someone who is reliable, dependable and someone who cares about their country.”

He was a writer on video games such as “Minecraft: Story Mode,” “The Walking Dead: Michonne” and “Game of Thrones.” He was also a contributing writer on “Tales from the Borderlands.” He eventually moved on to a different firm in video game writing and then on to being a full-time novelist. His proudest achievement thus far has been, “…working on the ‘Game of Thrones’ games. Waiting for the ‘Game of Thrones’ book is what spurred me on to write my first novel….it was a full circle process….I worked on a mobile ‘Avengers’ game which was great too….I am proud of my own novels as well where it was just me working on the book.”

Sloan credits Corps values such as, “…camaraderie where a lot of veterans out there want to keep loyalty and brotherhood together and we are part of the community….some veterans throw that away once they get out which I don’t understand….We get ahead by working together and I have had good experiences with veteran groups in entertainment. We should rise up together as, ‘a rising tide lifts all boats.’” He credits the Marine leadership traits in leading artists and co-authors, “…it is about knowing how to treat the people who work for you… Hiring fellow veterans for a project or job to work on feels great and you know what you are getting. Hiring civilians, you get a broader range of what they can and can’t do. In some essence, I prefer to hire veterans because you know what you are getting into.”

Sloan believes Marine Corps values can find their way into Hollywood by “…maintaining our camaraderie and working together after our time in service. We need to find more of a J.R.R. Tolkien style of Inklings (author C.S. Lewis was part of the group) where they all worked together. They shared their poetry. They came up together where if we could get more involved like that it would be awesome. We need to find civilian groups that have similar values as the Marine Corps. Some people are too busy asking, ‘How can you help me?’ and don’t get the long-term approach.”

He commented that Marine Corps stories can find their way into Hollywood “by working together more. When trying to sell a screenplay it is about you and why would we want to work with you. It is not just about your screenplay and being awesome. It is about selling you and the big picture view.” Sloan brings up how, “I recently wrote a story on a Marine that gets in trouble in Thailand. It is a personal story I can sell because it comes from me. I lived in Asia and was in the Marines where I can understand what my character is going through…People then have a reason to believe in you.”

Sloan likes filmmaker Quentin Tarantino and his, “poetry between the lines.” In Sloan’s first novel, he wrote to ensure having the “military between the lines,” to make it real and as if it was a part of him in the writing. He described, “You must impart your sense of ideals and for your time in the military….you can stress when telling people about the story.” Sloan wants to get into directing his own films here next. He has taken storyboard classes and finds his transition to be “the next logical progression.”

He has spoken at the Austin Film Festival, LA Comic-Con and San Francisco Writers Conference. He optioned a TV show recently as well. He is going to be spending the next two years focusing on studying directing. He shared his insights: “You will have a couple of years of low times when pursuing your dream, but I have had some great years as a writer as well.” Sloan offers these insights and words of encouragement for those seeking to journey into the creative side of Hollywood. His journey, as with others, requires patience, perseverance and a purpose-driven focus. Sloan’s novels include “Gateway to the Universe: In Bad Company,” “Claimed by Honor,” “Justice is Calling” and “Shadow Corps.”