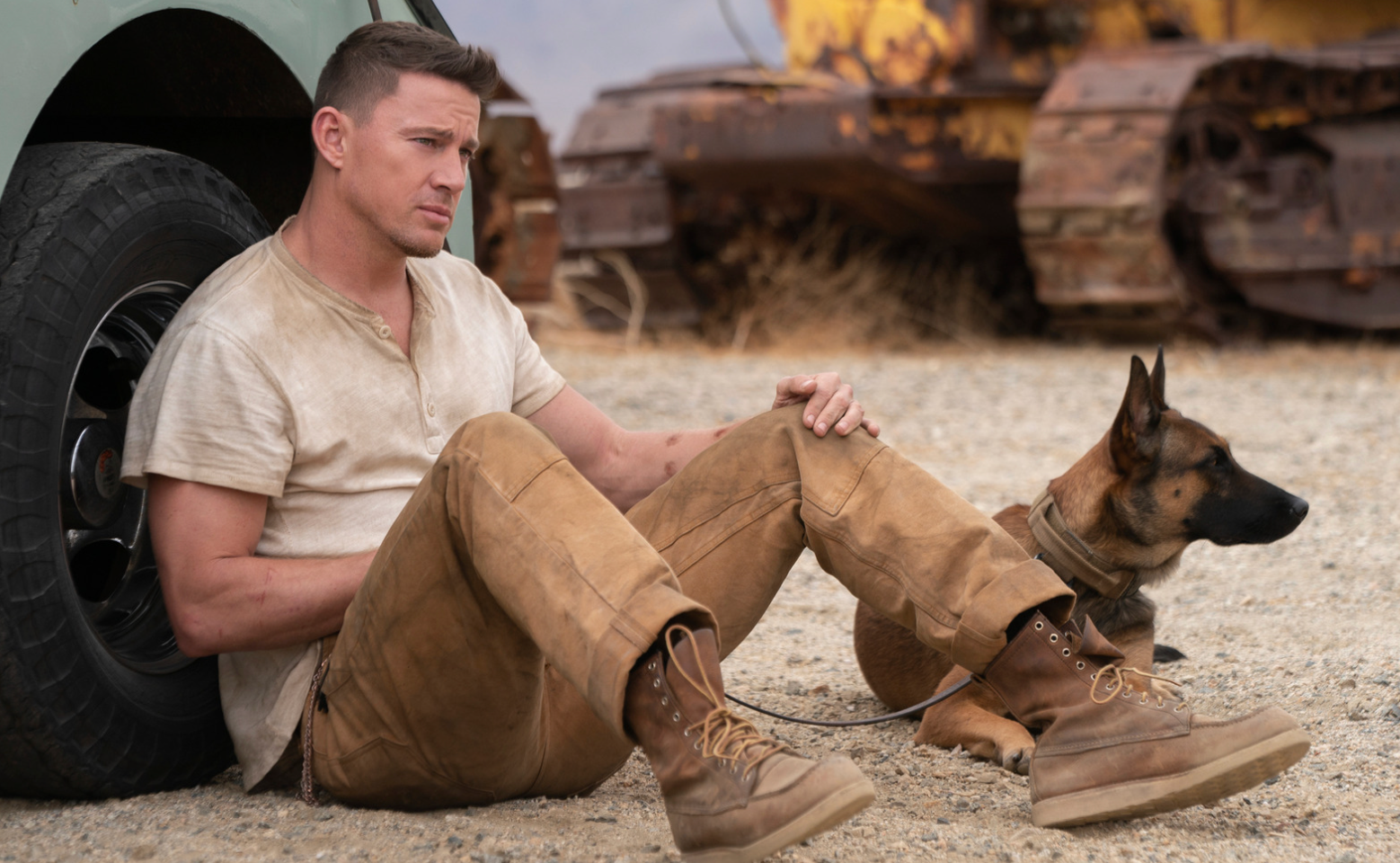 It’s not often a military movie gets “it” right. The ones that do, seemingly sacrifice the storyline in favor of authenticity. And the ones that don’t, often forgo honoring the sanctity of service in pursuit of better performance at the box office. United Artists Releasing’s latest film, DOG, directed by Channing Tatum and Reid Carolin, finds the perfect balance of telling a heart-warming story that honors a fallen Army Ranger and his military working dog.

“With a dog named Lulu by his side, Army Ranger Briggs [Tatum] races down the Pacific Coast to make it to a soldier’s funeral on time. Along the way, Briggs and Lulu drive each other completely crazy, break a handful of laws, narrowly evade death, and learn to let down their guards to have a fighting chance of finding happiness.”

An adorable Belgian Malinois + Channing Tatum. Is there a better combination?

Here are three reasons Tatum is the perfect person to make a film like DOG:

Tatum and Carolin are no strangers to military-themed projects. The pair met on the set of Stop-Loss, a 2008 war drama documenting the psychological effects of soldiers returning home from fighting in Iraq and the government’s controversial “stop-loss” policy that can dictate a soldier’s time in service is extended even after they’ve fulfilled their obligation.

Tatum and Carolin again partnered, this time as executive producers, to work on War Dog: A Soldier’s Best Friend, a 2017 HBO documentary exploring the relationship between special operators and their equally talented and highly-trained animals.

Dedicated, fearless and highly trained, these canines and Special Operations forces are cut from the same cloth, forging unbreakable bonds and developing lethal fighting capabilities under the most grueling selection courses. In this world, where two-legged and four-legged warriors are considered equal members of a team built on loyalty, sacrifice and love, communication travels up and down the leash in a nameless language.

Paying tribute to their service, War Dog recognizes the invaluable impact of these K9s on their human counterparts. With unprecedented access, the film brings these extraordinary stories to life, featuring exclusive military footage, personal photos, on-the-ground combat and drone video surveillance footage, footage of war dogs training and in action, and revealing interviews with the handlers, who open up about the physical and emotional struggles they’ve faced.

War Dog largely informed the script for DOG, honoring that unrivaled relationship between handlers and their K9s in the most incredible way. Tatum’s co-star in dog, Lulu, is loosely based on his own dog by the same name who passed away in 2018.

In DOG, Tatum and Carolin went to great lengths to ensure everything was “just right.” From hiring five veterans as technical advisors to spending extensive time with handlers and their dogs, every detail was vetted through a military advisory team. The dark humor and teasing prolific in the ops community is spot on, the stereotypes are subtle but nuanced and the struggles of war are discussed without being overtly in-your-face. To nail all those elements, Tatum even brought one of the handlers from War Dogs, Trent McDonald, out to spend a weekend with him, to ensure he was honoring the story.

In an exclusive interview, Tatum told We Are The Mighty why authenticity was so important to him:

“I think a lot of people will say [authenticity] is important to them, but then in a movie, it always gets to a place where it’s not good for cinema. We had a scene where it’s a wake for a fallen soldier. We needed to let the audience know it was a soldier that died. So we thought, do we do it in plain clothes that you might actually do it in, or do we have them in their Class As? We went back and forth on it. If you’re out in public, drinking, you would never be in your Class As. But if it’s private, right from the funeral – if they went to a backroom somewhere, not in public – then it would be okay.

We sat with people and listened to their stories and their actual experiences – what it was like to come home, figure out a job after they processed out. There’s no reason to make it otherwise. I’ve never served; I shouldn’t just be making up a story about soldiers, it doesn’t make any sense. I think a lot of people in Hollywood just do.

Getting Ranger Battalion right was hard. You can’t get photos inside the Team Rooms; there are no photos. We had to really rely on them and on a low-budget. We basically put our salaries in to make that correct. We wanted to do it proper by them.”

Tatum’s love for Rangers is readily apparent in speaking with him. “Rangers are the funniest people I know,” he told WATM. “They’re hilarious. I probably DM more with them than my closest friends in Hollywood. They’re crazy in the most amazing  way – they’re witty and funny and smart. Those are the people we should be making movies about. It’s probably why we gravitate toward it so much.”

Tatum also has profound respect for the military community and a beautiful, healthy perspective about what service members endure.

He explained, “I couldn’t imagine how important mental health is in the military community. I have to go away for 3-4 months at a time for a movie, but I have all the amenities to bring my family and to do all these things, and that’s still hard. I can’t imagine what it’s like to just be gone from the people you love for so long. And not to mention, that’s just the normal things, when nothing sort of traumatic happens. I would say mental health is one of the highest priorities I’d put on everyone. The military is a very, very important place to spend as much as we can on the people willing to fight for us. It’s an impossible job to really understand if you haven’t served.”

While Tatum might not fully understand what it’s like to serve, he honors our service members by telling a story full of light, hope, redemption, and love. Watch DOG in theaters February 17.