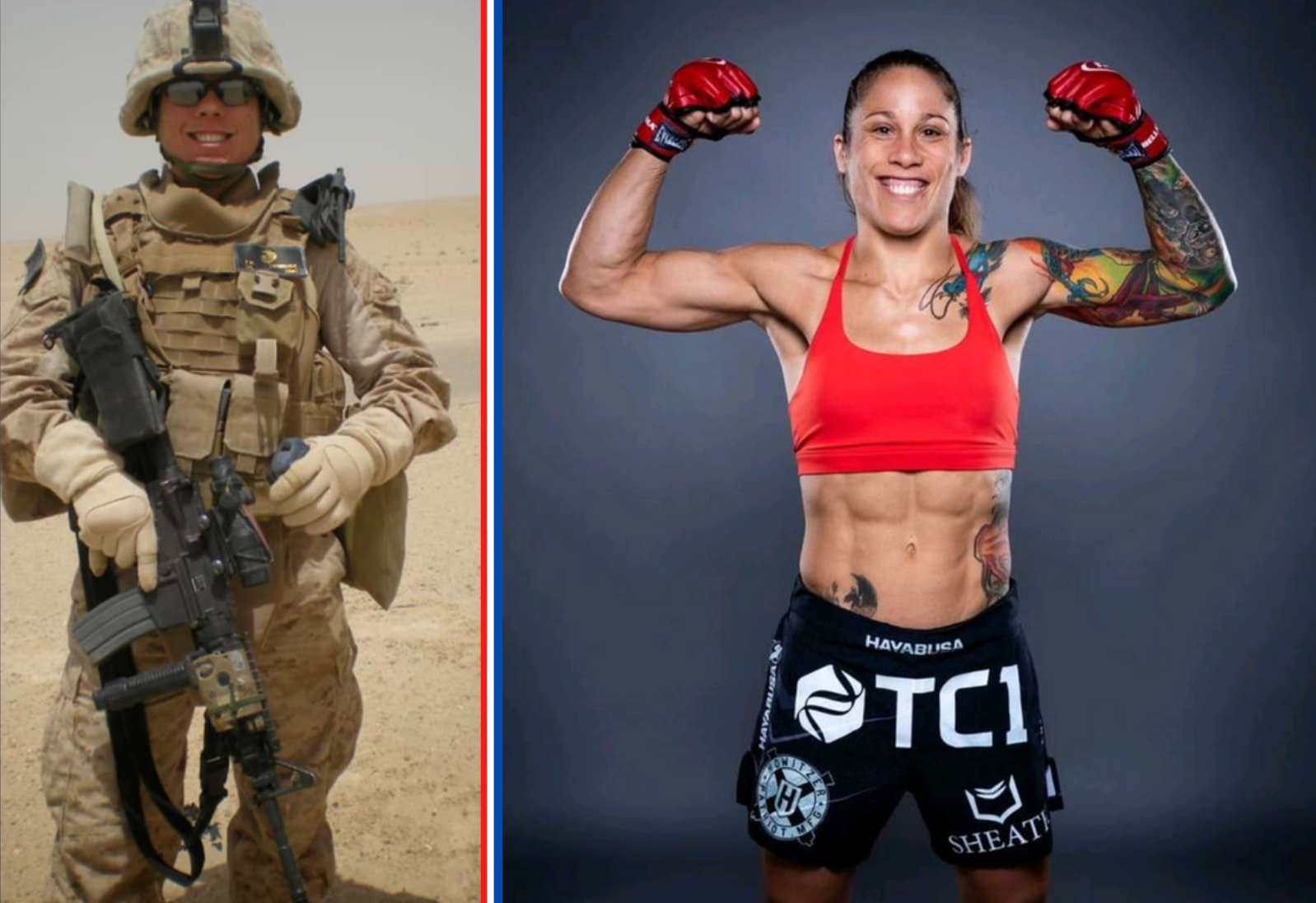 Carmouche’s passion for service was rooted in childhood and she knew one day she wanted to raise her own right hand for her country, just like her father did for the Air Force. “Being around all of those military personnel it really just made a strong connection for myself and me wanting to fulfill a desire to go into service as well,” she explained.

Growing up in Okinawa, Japan gave her the opportunity to see and work alongside all branches of service. But there was one in particular which called to her.  “The Marine Corps really stood out for me,” Carmouche shared.

After enlisting in 2004 and going through boot camp at Parris Island, she was stationed in San Diego as an aviation electrician. Carmouche fell in love with the city and eventually made it her home.

In her first five years of service, she deployed to Iraq three times.

“My service changed me in a very positive way,” she said. Once Carmouche transitioned out of the Marine Corps in 2009, she began opening gyms — fitness had always been a passion.

“Very soon after leaving the military I started my professional career in MMA. I participated in organizations like Strikeforce and UFC Bellator,” Carmouche explained. “I was fortunate enough to come to this place on my journey where I’ve partnered with USAA and ESPN to give a tour of my home base here.”

As both a military child and veteran, she recognized the power of home. Though she is a private person, Carmouche said welcoming the film crew inside was actually a blast. They were amazing to work with and her wife and son enjoyed the process, she shared.

So, what will viewers be most surprised to learn about Carmouche as she welcomes them into her home? “The livestock,” she said laughing. “I basically have a mini-farm in my backyard.” In partnership with USAA, ESPN’s YouTube Channel aired the episode on Tuesday August 24, 2021.

Her 5-year-old son is just starting to really ask questions about her time in service. “He’s getting to an age where he’s starting to understand it. I don’t think he really knows but he’s seen my uniforms and pictures. He thinks it’s cool but I don’t think he knows yet what it means to be a service member,” she explained.

As for what drove her to begin competing in MMA, many would be surprised to learn it was actually a Marine Corps officer who suggested it. After initially being unsure, it didn’t take long to be all in. “I absolutely fell in love with it and wanted to get more involved with training. The first time I got hit in the face, whatever it was about it, had me hooked,” Carmouche laughed.

For her, getting hit wasn’t as bad as it seems. For many veterans who’ve witnessed and been through combat, the life stressors after service can sometimes often pale in comparison.

“The coping mechanisms you develop by being in combat in places like Iraq transfer over to everything,” she explained. “All the lessons you learned, stresses, experiences and overcoming things in life can help you adapt to any situation.”

And adapt she did.

Now 11 years later, her transition from service brought her right where she wants to be. It’s a feeling she hopes all veterans will find for themselves. “I have many veteran friends who didn’t know who they were without the military. My biggest message is that they can find their identity again,”Carmouche said. “If they believe in themselves and recognize that the things they’ve been through have made them more resilient than anyone out there, they can do it.”