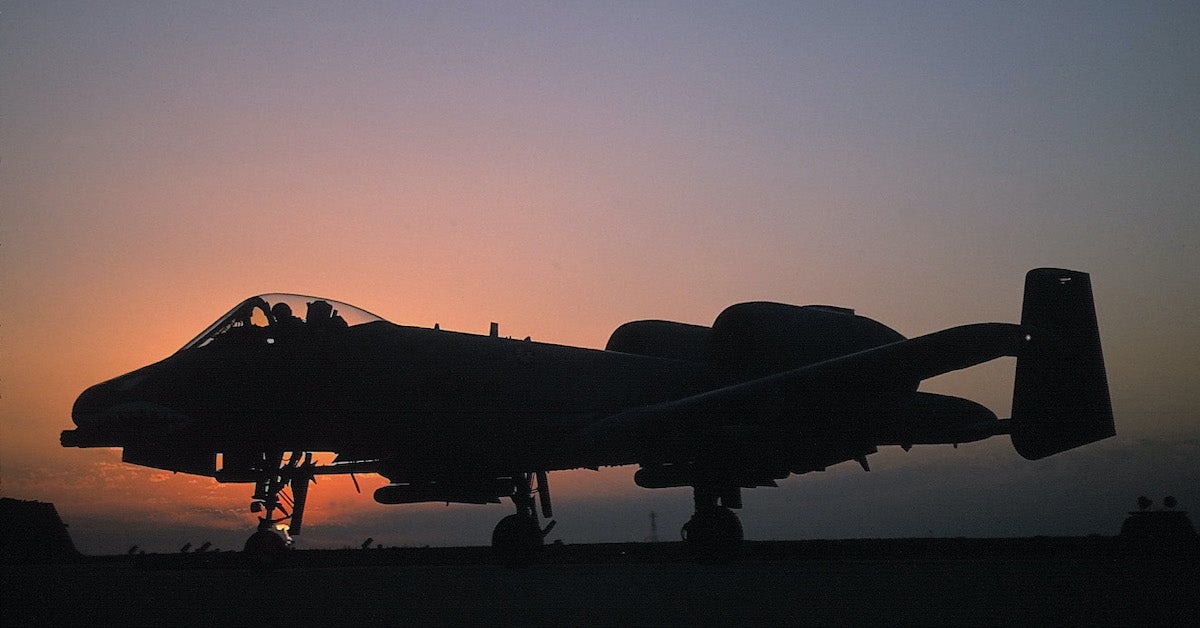 The A/OA-10 Thunderbolt II is the first Air Force aircraft specially designed for close air support of ground forces. They are simple, effective and survivable twin-engine jet aircraft that can be used against all ground targets, including tanks and other armored vehicles. The A-10/OA-10 have excellent maneuverability at low air speeds and altitude, and are highly accurate weapons-delivery platforms. They can loiter near battle areas for extended periods of time and operate under 1,000-foot ceilings (303.3 meters) with 1.5-mile (2.4 kilometers) visibility. Their wide combat radius and short takeoff and landing capability permit operations in and out of locations near front lines. Using night vision goggles, A-10/ OA-10 pilots can conduct their missions during darkness. Thunderbolt IIs have Night Vision Imaging Systems (NVIS), goggle compatible single-seat cockpits forward of their wings and a large bubble canopy which provides pilots all-around vision. The pilots are protected by titanium armor that also protects parts of the flight-control system. The redundant primary structural sections allow the aircraft to enjoy better survivability during close air support than did previous aircraft. (U.S. Air Force Photo by Senior Amn. Greg.

No one is debating the effectiveness of the AH-64 Apache. It’s one of the deadliest combat aircraft ever fielded. In Afghanistan, its mere presence in the sky is enough to deter enemy fighters from even thinking about taking a shot on troops on the ground. However, there’s something to be said for close air support provided by fixed-wing aircraft. Of course, everyone is familiar with the legendary A-10 Thunderbolt II and its ability to deliver huge volumes of precision fire on ground targets.

In WWII, the Army Air Corps tore into German supply convoys with the P-47 Thunderbolt at low altitude. In Korea and Vietnam, the Navy and Marine Corps utilized the A-1/AD-4 Skyraider with great efficiency to support ground troops. Today, the Marine Corps still integrates its infantry with close air support through the Marine Air-Ground Task Force. By combining these two crucial components, the MAGTF is able to organically conduct combat operations with increased efficiency. Marines on the ground are supported by Marines in the air and everyone speaks the same language and knows what the other needs to do their job. So, why doesn’t the Army do this?

After the creation of the Air Force in 1947, the military needed to clearly define its purpose amongst the established branches. In 1948, Secretary of Defense James V. Forrestal held a meeting with the service chiefs in Key West, Florida to do just that. Due to the location of the meeting, the policy paper that resulted is commonly referred to as the Key West Agreement. Broadly, the agreement gave the Air Force control of everything in the sky. The Air Force’s functions included air superiority, strategic air warfare, close combat and logistical air support, aerial intelligence gathering, strategic airlift, and even maritime operations like antisubmarine warfare and aerial mine-laying. However, the agreement did provide for the Navy to retain its combat air arm “to conduct air operations as necessary for the accomplishment of objectives in a naval campaign.” The Army, on the other hand, made out like a bad divorce. Army aviation assets were reduced to solely reconnaissance and medical evacuation purposes.

The Key West Agreement was built upon with the Pace-Finletter Memorandum of Understanding of 1952. Secretary of the Army Frank Pace and Secretary of the Air Force Thomas K. Finletter came together to expand the Army’s allowed aviation capabilities. In an effort to restrict the Army’s use of combat aircraft, the Key West Agreement limited the weight of Army rotary-wing aircraft. With the Pace-Finletter MOU, this weight restriction was removed, paving the way for combat helicopters like the UH-1 Huey gunship, AH-1 Cobra, and AH-64 Apache. However, it did place an arbitrary weight restriction of 5,000 pounds on Army fixed-wing aircraft. Although this restriction was later modified, it set the precedent to make the Army reliant on the Air Force for close air support and airlift.

If the previous agreements weren’t enough, the Johnson-McConnell Agreement of 1966 was one more blow to Army fixed-wing aviation. In Vietnam, mountainous terrain made resupply by airlift difficult with the Air Force’s primary cargo planes like the C-123 Provider which required 1,750 feet of runway to take off. To address this problem, the Army employed the CV-2 Caribou and planned to acquire the CV-7 Buffalo airplanes. Both planes could perform short takeoffs and landings while carrying more cargo than the Army and Air Force’s helicopters could lift in and out. This didn’t sit well with the Air Force and private negotiations were held between Army Chief of Staff General Harold K. Johnson and Air Force Chief of Staff General John P. McConnell. The resulting agreement forced the Army to relinquish control of the CV-2 and CV-7 to the Air Force. However, the Air Force did relinquish its sweeping control over rotary-wing aircraft. This expanded the Army’s ability to field helicopters and resulted in the diverse fleet that the Army Aviation Branch fields today.

While the Army doesn’t fly CAS airplanes like the A-10 and is still technically restricted from acquiring new CAS airplanes like the A-29 Super Tucano, it’s worth noting that the Army does have some fixed-wing aircraft. The Army flies nealy 200 turboprop R/C-12 Hurons for light transport and intelligence, surveillance, and reconnaissance missions. Something that will further surprise most people is that the Army does fly jet aircraft for VIP transport. The UC-35 is based on a Cessna business jet and the C-37 and C-20H are based on Gulfstreams.

Though these 20th century agreements prevent the Army from flying combat airplanes, advancements in rotary-wing technology have led to high-speed helicopters like the S-97 Raider and large tiltrotor aircraft like the V-280 Valor. Aircraft like these will carry Army Aviation into a new age of aircraft and allow soldiers in the sky to retain the advantage on the battlefield.