This Army helicopter crew responded to a car crash in Germany 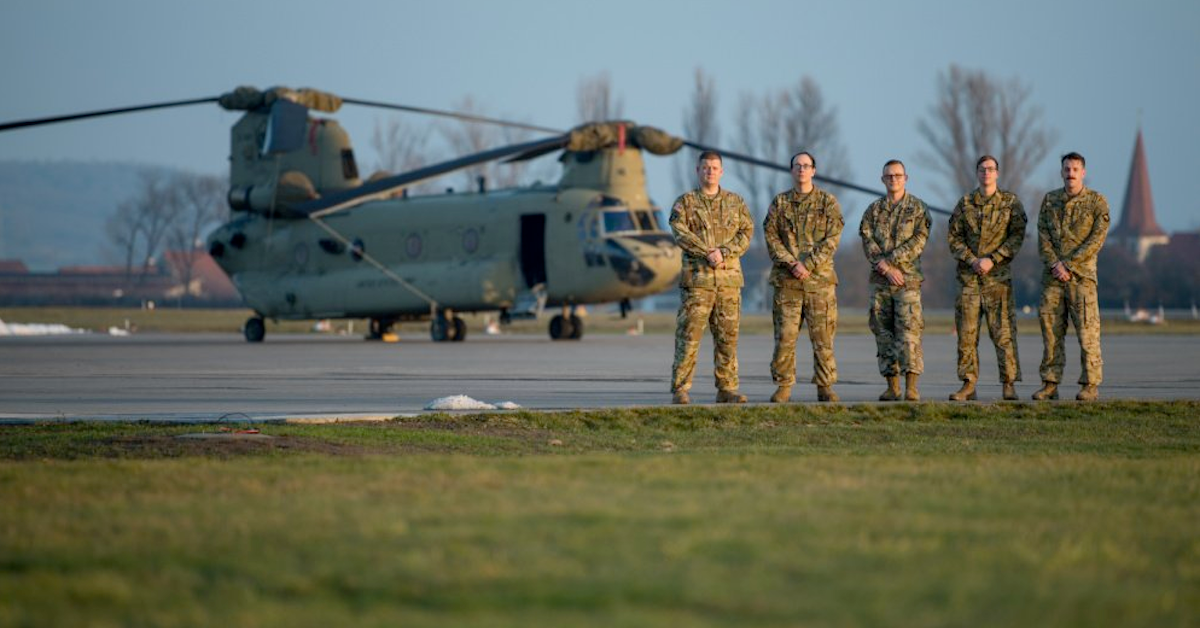 Since April 2014, U.S. Army Europe has rotated units from the U.S. to the European continent in support of Operation Atlantic Resolve. The ongoing operation aims to enhance NATO’s eastern flank against Russian aggression and deter future conflicts like the War in Donbass. The rotations and joint and multinational training build readiness and strengthen bonds with NATO allies. For one helicopter crew, the training turned into a real-life emergency response.

On December 15, 2020, the five-soldier crew of a CH-47F Chinook was returning from a training mission. The crew, assigned to B Company, 6th General Support Aviation Battalion, 101st Combat Aviation Brigade, 101st Airborne Division (Air Assault), is posted in Illesheim, Germany in support of Operation Atlantic Resolve. However, on their way home, the crew witnessed an emergency on the ground.

“We were flying over a ridgeline in a rural area,” said pilot Chief Warrant Officer 2 Dave Acton. “Once we cleared it, my crew chief in the back came on the comms system and said he saw a puff of white smoke on the road below.” A civilian car got into a serious accident on the road below the Chinook.

“After I called that in, I looked further down the road and saw a car roll over two or three times, “said crew chief Spc. Bruce Cook. Now aware of the emergency situation on the ground, the crew requested permission to assist.

“It was like we all simultaneously thought the same thing…that the right thing to do was to assist however we could,” said co-pilot Chief Warrant Officer 2 Robert Riedel. “I like to think its natural human instinct to want to stop and help in any way that you can.” The air mission commander gave them the green light and the Chinook descended to the site of the car crash.

Once the helicopter was on the ground, brigade flight surgeon Maj. Benjamin Stork assessed the situation, jumped out, and ran to the crash. “I checked my medical pack attached to my vest to make sure I had everything I might need to stabilize possible injuries,” said Stork. “Once I got to the man in the crash, I checked his vitals and made sure he was cognizant; thankfully, he spoke English pretty well because my German is pretty broken.”

Stork stabilized the man’s neck and back before an ambulance arrived on the scene. After briefing the paramedics on the situation, Stork helped them transfer the man to the ambulance and ran back to the helicopter. “All in all, from noticing the car flip to getting the wheels up off the ground, about 30 minutes passed,” said Stork. “Every piece of the operation felt organic, smooth and controlled because of how well these guys talk to each other.”

The quick, efficient, and professional response by the Chinook crew demonstrates the effectiveness of the countless hours of training that they go through. “We are in Europe in support of Atlantic Resolve, and for the most part that means that we train together with our ally and partner military forces,” said Col. Travis Habhab, commander of the 101st CAB. “I think that an important part of building that partnership and trust also lies in connecting with and supporting the local community where we can. The level we train at is what allows us to let these types of responses happen organically, and I’m incredibly proud of our Wings of Destiny Soldiers for making the call to help someone in a situation that could have been much worse.”