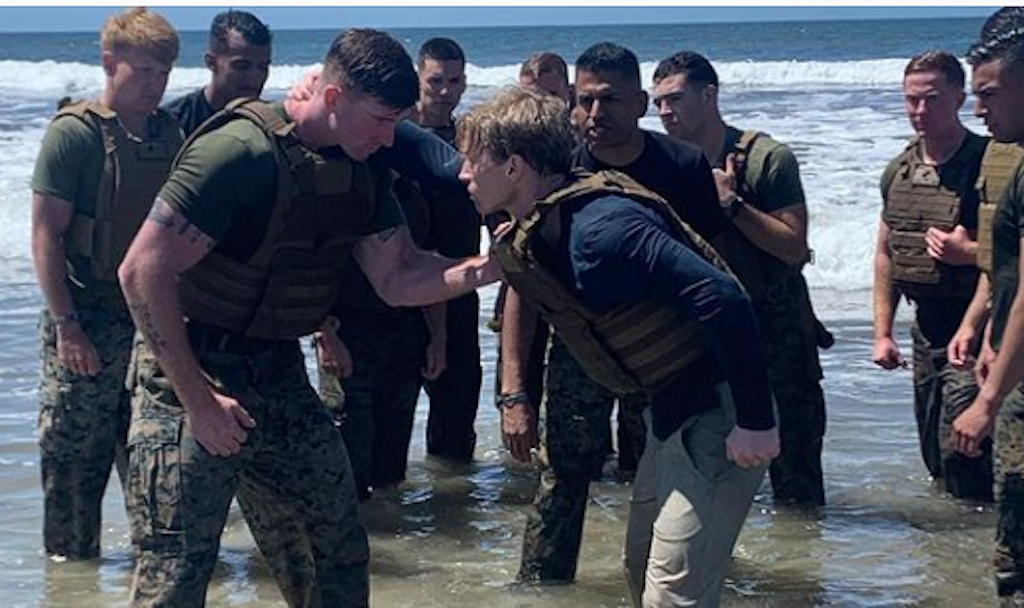 In a scene reminiscent of Heartbreak Ridge with Clint Eastwood, Magnus Mitdbo takes on current Marines in MCMAP in shallow water grappling challenge at Camp Pendleton. The meeting was arranged through the Entertainment Media Liaison Office, which is aboard Camp Pendleton and handles the media for the Marine Corps on the West Coast.

Magnus Midtbo was born and raised in Bergen but has lived in Oslo, Norway, the past few years.

Twenty years ago he “accidentally” tried climbing for the first time. It immediately showed him that it was what he wanted to devote his life to. It became an all-consuming passion and later work of living. Magnus says that making a living out of what you love the most is a dream come true. He has competed both nationally and internationally since he started his career. He is an influencer with 1.28M followers on YouTube and 402k followers on Instagram. He has been making videos for over 11 years on YouTube with varying degrees of physical challenges.

The Marine Corps Martial Arts Program was instituted in 2001 and trains Marines in unarmed combat, weapons of opportunity, rifle and bayonet techniques and edged weapons. A core tenet of the program is mental and character development, involving the use of force, leadership and teamwork. Its motto is “One Mind, Any Weapon.” The Martial Arts Center of Excellence, aka The MACE, is located in Quantico, VA at Camp Barrett, which is also the home of The Basic School. MCMAP has a rich history of warfare dating back to the early days of the Corps. Even some of the experiences and training of Marines in Kung Fu, two of which later became generals, one of which a Commandant, were integrated into the program. MCMAP came after the Marine Corps had used LINE training for about a decade in the late 80s and 90s, which did not have many non-lethal applications which were instituted during the creation of MCMAP.

MCMAP has a belt system, some of which get a tab to be an instructor and even an instructor-trainer. The belts include Tan, Gray, Green, Brown and Black. The Green, Brown and Black belts can have instructor tabs. The black belt can have an instructor trainer tab, which is completed through the Martial Arts Instructor Trainer course at the MACE. One note is that all infantry Marines are required to complete the Green belt certification and all other combat specialties are required to complete the Gray belt. Many great martial arts cultures are also studied through the program such as the Marine Raiders, Spartans, Zulu and the Apache. One of the program’s key points is to create ethical warriors, which is reinforced through the study of such cultures and the stressing of values. MCMAP draws on several styles which include BJJ, Wrestling, Boxing, Muay Thai, Aikido, Krav Maga, Kendo, Kung Fu and Taekwondo to name a portion.

Magnus is first put through the obstacle course while wearing a SAPI plate carrier. After that, he is taken to the beach and put through even more rigor with extensive physical training, martial arts instruction and High-Intensity Tactical Training (HITT). After he is thoroughly exhausted Mitdbo is taken into the shallow ocean water to fight the Marines. You must watch the video to see how it all turns out! Semper Fi!