Things to know about the Gallic Wars - We Are The Mighty

6 things to know about the Gallic Wars 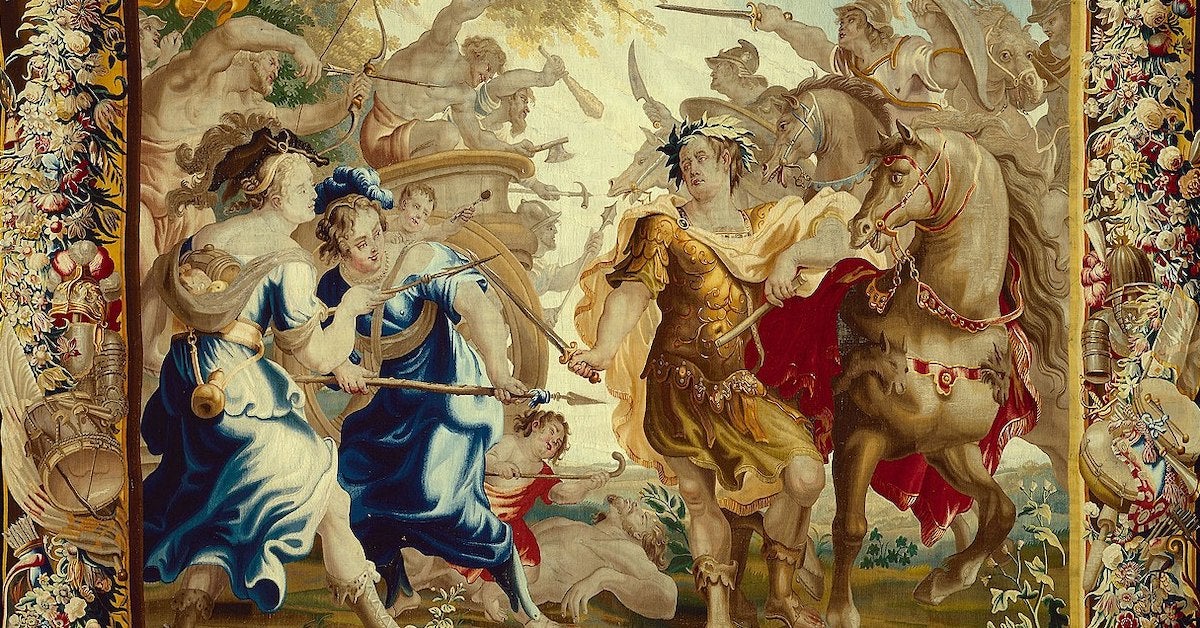 Julius Caesar is known as one of the greatest generals of all time. He was so inspiring that he persuaded his army to cross the Rubicon River and march on Rome, to overthrow the politicians who threatened to strip Caesar of his military command. Caesar had to earn their loyalty, though, and he earned his reputation as a brilliant commander in the Gallic Wars. These conflicts were fought between 58 and 50 BC in the land the Romans called Gaul (and we call France). Here are six things to know about the Gallic Wars.

1. Caesar fought the wars to pay off his debts

In the year 59 BC, Caesar served as consul, one of the highest positions in the Roman government. In Roman politics, you won votes through bribery, and Caesar spent so much money that by the end of his consulship he was riddled with debts. There was an easy solution to this problem: give himself a province. Provincial governors could enrich themselves through conquest and plunder, and Caesar ended up receiving a stunning three provinces to govern: Transalpine Gaul, Cisalpine Gaul, and Illyricum (southern France, North Italy, and the western Balkans, respectively). But to the north, there was Gaul, ripe for the taking.

2. The Gallic Wars started out small

When Caesar learned that a Gallic tribe called the Helvetii were planning on migrating through Transalpine Gaul, he started to fortify the Rhone River to stall their movement. The Helvetii were denied the right to cross, so they doubled back to find a different route, all the while raiding and plundering other Gauls. These oppressed tribes came to Caesar asking for help defending themselves from the Helvetii, and Caesar obliged. Over the course of a few months, the Romans pursued the Helvetii and whittled down their forces before finally defeating them at the Battle of Bibracte.

3. Many Gauls wanted Caesar there…

Many Gauls were impressed with Caesar’s defeat of the Helvetii and so asked him to defeat the Germanic tribe of the Suebi that was invading Gaul. Caesar could not declare war just yet because the Suebi king Ariovistus was technically a Roman ally, but repeated harassment of the Gallic tribes gave Caesar the justification he needed to declare war. By the end of the year 58 BC, Caesar had defeated Ariovistus. The next year Caesar and his legions marched to fight the Belgae, a Gallic confederation that was harassing a Roman-allied tribe. The most warlike of the Belgae were the Nervii, who surprised the Romans at the Battle of the Sabis and nearly defeated them. Caesar, however, was able to turn the tide of battle and snatch victory from the jaws of defeat. The Belgae surrendered to Caesar shortly after. Lots of Gauls were happy that Caesar was there to protect them from dangerous tribes, but others were starting to chafe under Roman rule.

In 54 BC, the Eburones tribe under king Ambiorix revolted against Caesar’s rule, slaughtering thousands of Romans at the fortress of Atuatuca. The Romans responded by attacking Ambiorix’s allies and isolated the Eburones until the rebellion fizzled out. This, however, was only the precursor to a much larger rebellion. Vercingetorix, king of the Averni tribe, had been making alliances with other tribes for a while now, and in 52 BC, Vercingetorix and his united tribes rebelled against Rome. The Romans chased the Gauls throughout Gaul until Vercingetorix holed up in the fortified city of Alesia, which Caesar could not take. On top of that, Vercingetorix summoned his Gallic allies to attack the Romans who were stationed outside Alesia. The Romans were able to defend themselves from Gallic attacks within and without the city until Vercingetorix surrendered. There were more campaigns to wipe out the last elements of resistance, but Caesar had successfully conquered Gaul for Rome.

5. Caesar went as far as Britain and Germany

Back in 56 BC, Caesar started a new campaign against the Veneti tribe, which had taken Roman hostages and threatened to kill them unless the Romans sent them food. The Romans were victorious after a long campaign on sea and land. Afterwards Caesar started two controversial campaigns: one across the Rhine River in what the Romans called Germania, and one across the English Channel in what the Romans called Britannia. Neither campaign yielded much fruit, but the fact that Caesar had crossed into the “barbarian” lands of Britain and Germany left an impression on the minds of many Romans.

6. Caesar wrote about the Gallic Wars himself

One of the most important historical sources for the Gallic Wars is the Commentari de Bello Gallico, or Commentary on the Gallic Wars, written by Julius Caesar himself. With this book, Caesar could record the history of the Gallic Wars for posterity, while also defending his actions to the Romans, many of whom were suspicious of his imperialist tendencies. Although Caesar is most famous for his dictatorship over the Roman Republic, his conquests during the Gallic Wars supplied him with the support and resources he would require to change the course of Roman history.