MIGHTY 25: Meet Sherman Gillums, one of America’s most distinguished voices in veteran’s advocacy - We Are The Mighty

MIGHTY 25: Meet Sherman Gillums, one of America’s most distinguished voices in veteran’s advocacy 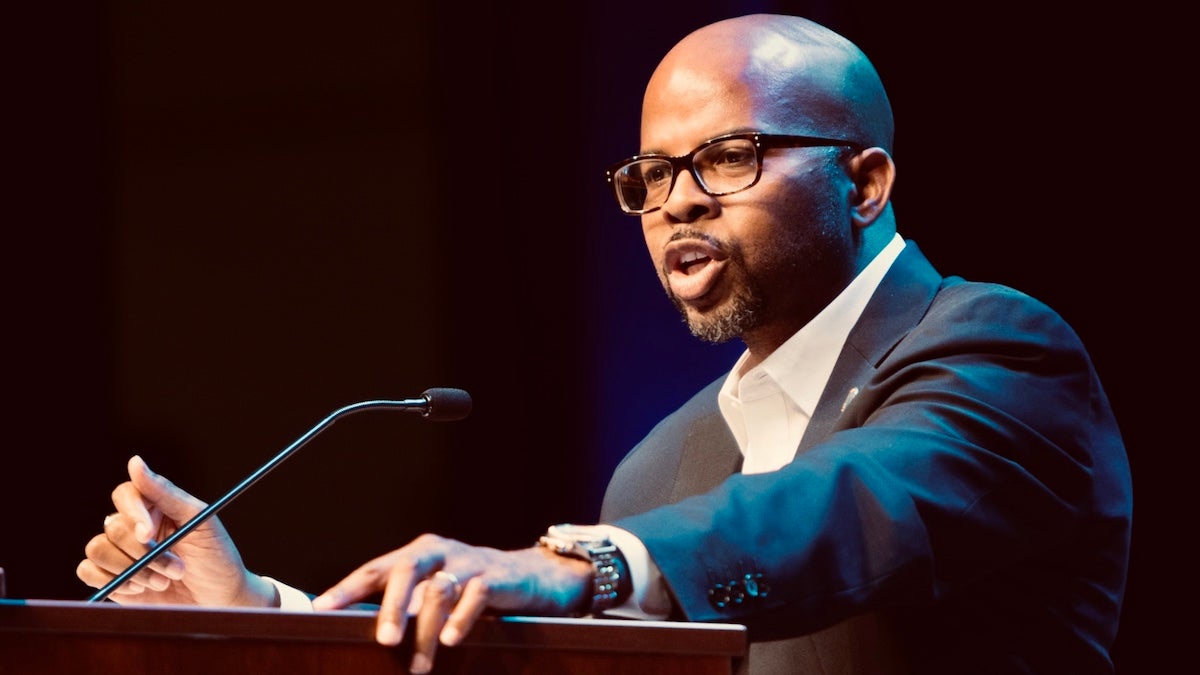 Sherman Gillums is a proud Marine Corps veteran who served on active duty for 12 years before being critically injured in a training accident. What could have ended a career of service was only the beginning.

Although Gillums is proud to call himself a Marine, he was almost a sailor. As fate would have it, his recruiter was late to a scheduled meeting when he overheard the Marine recruiters down the hall. “I walked in there and there was this energy. It was this imposing presence! My dad died when I was a kid and I was always looking for that… that’s what got me,” he said. Gillums shared that his grandfather was a Korean War veteran and was very influential in his decision to serve.

At just 17 years old, Gillums enlisted before he even graduated high school.

Gillums quickly rose within the ranks, making Chief Warrant Officer in 2001. A critical training injury not long after the terrorist attacks of September 11, 2001, would prematurely end his military career, but not his commitment to serving.

“After rehab, I fell into veteran advocacy,” Gillums explained. “I was helping some other guys on the spinal cord injury unit figure stuff out since I’d already been through my own benefits case. I found a knack for speaking up for veterans. When the opportunity opened up for me to join Paralyzed Veterans of America as a Service Officer, I thought it was the perfect job,” he shared.

At one point, Gillums thought of becoming a lawyer, but with his new role he was able to do the same type of work without going to law school. “I was presenting cases before veterans law judges. I could have done it forever but it was during a time where the VA backlog was getting pretty bad,” Gillums explained. During all of this, he earned his Master of Business Administration degree from the University of San Diego School of Business.

“I left the grunt work, which I loved, but now I was able to influence policy,” Gillums said. “I was then thrusted into VA health care and doing site visits at the facilities. That’s what made me unique, I got to see the VA from the perspective of a user everywhere.”

It wasn’t long before Gillums was thought of as a sort of insider. “I would speak truth to power and that gave me a little bit of notice and pushed me into senior leadership at Paralyzed Veterans of America where I really began to get vocal,” Gillums shared. He continued his climb within PVA, becoming the Associate Executive Director of Veterans Benefits in 2011, the Deputy Executive Director in 2014 and eventually, leading the organization as its Executive Director in 2016.

Gillums spent a lot of time meeting with members of congress and both the Obama and Trump Administrations, advocating for the needs of America’s veterans. He quickly became known for his honesty and directness, writing articles for publications like The New York Times and The Hill.

“I developed a great rapport at the VA but also this reputation for shooting straight with them because I knew what I was talking about,” he explained. “What made me unique was I started on the benefits side, stayed there for years. I went on the health care side – was also a patient – then went to the policy level. I am one of the few people who actually and truly understands the VA from top to bottom and left to right.”

He also applied his direct approach to veteran suicide rates, an issue he didn’t hold back on. “Suicide was a big thing and I heard all these great things but then I would talk to all of these Suicide Prevention Coordinators who didn’t have a seat at the table when it came to the status of veterans or their treatment,” Gillums shared. This drove him to become heavily involved with policy changes and implementation within the organization, lending his voice on many of the briefings and changes.

Gillums assumed the role as the Chief Strategy Officer for American Veterans in 2018. AMVETS is arguably one of the most influential, congressionally chartered veterans service organizations, serving veterans since 1944. In a memo after his hiring, the National Commander Marion Polk stated that, “AMVETS is very proud to have one of America’s foremost and most distinguished voices in veteran’s advocacy join our team.”

Although his voice is powerful, Gillums remains modest and humble about his success and service. However, he stated that it is vitally important that citizens realize how influential their own voices can be. “It’s a matter of allowing yourself to be human and at the same time thinking more of yourself then being a cog in the wheel. You can really make a difference. If you think you are too small to make a difference try sleeping in a tent with a mosquito,” he said with a laugh.

The advice of this incredible Marine veteran, advocate and servant to citizens everywhere is simple: Go be that mosquito.