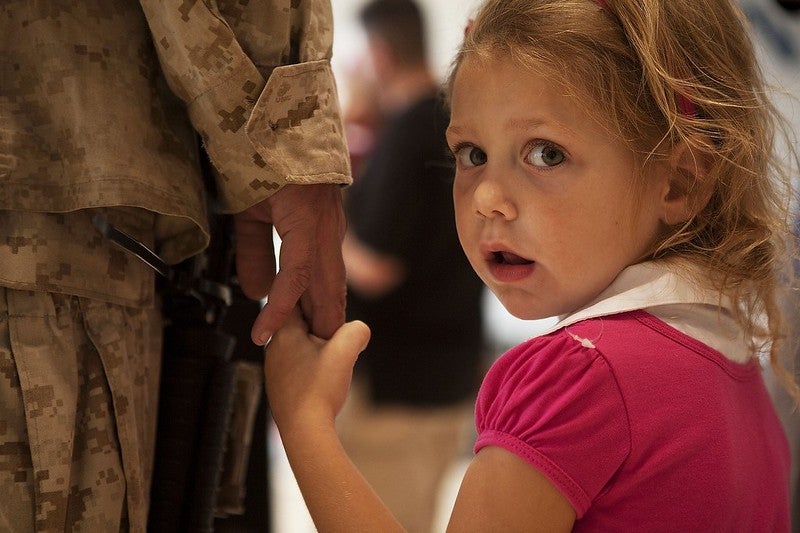 April is designated the “Month of the Military Child,” established in 1986 by then Defense Secretary Caspar Weinberger. Blue Star Families and USAA are bringing awareness to the military’s children and their needs.

In 2009, Kathy Roth-Douquet founded Blue Star Families alongside a few other military spouses and remains its CEO. Her mission and passion for the organization has remained the same, even 12 years later. The issues military families are facing have remained the same as well. “Month of the Military Child is really about bringing awareness to the challenges and the strengths of these  military kids,” she explained. “This COVID year has been a challenging year and it hit military families harder than most people.”

Around a third of military families move every single year and despite the pandemic, that continued. “Isolation came to everybody…for military kids, you were putting isolation on top of isolation. They were already vulnerable,” Roth-Douquet shared. She also touched on the recent data suggesting that almost 50% of employed military spouses lost their jobs due to the pandemic. For a population already underemployed, this was catastrophic.

“The loss of the spouse’s income and needing to provide food at home more often meant that as many as 27% of our junior enlisted families who participated in our survey said they were experiencing food insecurity,” she explained. Food insecurity wasn’t happening to just them, either. Roth-Douquet also stated that even the mid-level enlisted and noncommissioned officers were experiencing it as well.

In 2020, USAA gave $30 million to all of the military relief organizations. Recognizing the negative impacts of the pandemic for military families, they stood ready to serve. Justin Schmitt is the Assistant Vice President for USAA’s Corporate Responsibility.

Schmitt comes from a family with deep military ties, although he is not a veteran himself. “I almost feel guilty about not serving,” he said. “What I’ve learned with over 14 years at USAA is that you don’t have to wear a uniform to serve our country…the cause of supporting military families is one of the noblest of causes for the civilian community.”

This means recognizing the sacrifices of the military families in the name of American freedom.

“When a service member serves our country, really their spouses and their children serve as well. We really believe that the well-being of the family unit is essential for the service member to do their job,” Schmitt said. “Our philanthropic strategy is focused on strengthening the military family’s resilience…many civilians may not realize the simple act of friendship and welcoming a military family that has moved onto your street or has joined your school…can make a huge impact on the mental health and well-being of the military family.”

Nonprofit organizations like Blue Star Families have remained committed to collecting the data and then creating measurable and impactful solutions to the issues military families are facing. With the underemployment and unemployment of the military spouse mainly linked to childcare, it’s an issue that needs to be addressed immediately, according to Roth-Douquet.

“Unless we really deal with this, we will not be able to keep women in the service coming up and we will not be building strength over all. That’s an enormous issue we need to tackle,” Roth-Douquet explained. The other concern not often broached by committees is the vital need for mental health resources for military children.

“We are coming to understand that, with over 20 years of combat, we’ve been raising kids in an atmosphere where we really haven’t understood the fall out that comes from it. We need to provide more understanding, support and intelligence on how we help our military kids,” she said. It’s something that we haven’t really grappled with as a country but something Blue Star Families plans on taking on in the future.”

Schmitt echoed that comment, sharing that he’s grateful for the partnerships of national nonprofits working together to find solutions to these problems.

For Roth-Douquet, Blue Star Families was born of a concern for her community and her own children. “I felt like I couldn’t solve problems for them by myself. I needed to look at it in a broader way and get my community involved,” she explained. “People love their children and worry about their children…for me, that’s where the passion comes from and that’s why it’s motivating to keep doing the work. Action can be therapy. If you feel like you are making a difference then you are going in the right direction.”

As we continue to celebrate Month of the Military Child, look for ways to uplift and encourage this often-forgotten population. For their courage and sacrifice is awe-inspiring. Let us recognize it and support them as their parents continue to answer the call that others cannot or will not.