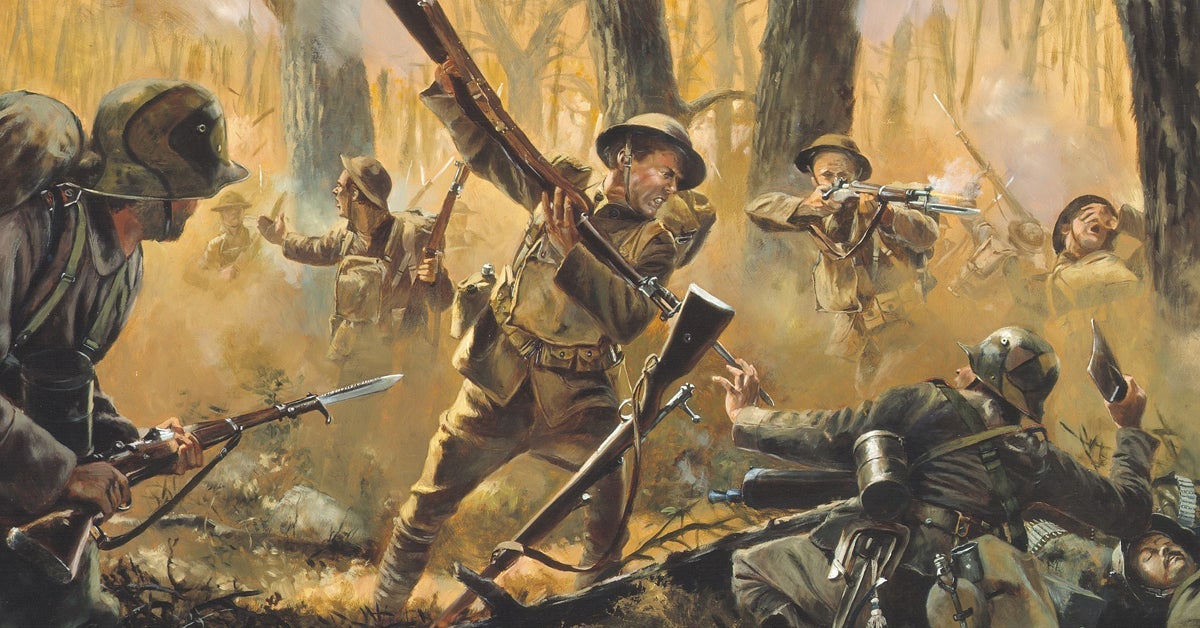 The 3rd Infantry Division, then known simply as the 3rd Division, was activated in November 1917 for service in World War I. They were fighting the Germans by April 1918. The green troops of the 3rd Division were thrown into the line in the midst of a strong German attack along the Marne River.

The Marne had been the site of a significant battle that had turned back the German onslaught into France in 1914. It would be remembered once again in 1918.

Also read: This is why 3/2 Marines call themselves ‘the Betio Bastards’

After the Germans’ Spring Offensives had ground to a halt, they still sought a breakthrough of the Allied lines. Hoping to draw forces away from Flanders, where the Germans hoped to eventually drive through to Paris, they launched a large scale offensive to the south in the vicinity of Reims.

In the early morning darkness of July 15, 1918 the Germans began crossing the Marne River in assault boats.

Under a massive artillery barrage, the German Seventh Army smashed into the French Sixth Army. Under the brutal bombardment and onslaught of German stormtroopers, the French fell back in disarray. All along the line the Germans were quickly gaining ground – except for one spot on their right flank.

This was the position held by the 3rd Division. Particularly stubborn resistance came from the 38th Infantry Regiment under the command of Col. Ulysses McAlexander. It was dug in along the riverbank with a secondary line holding a raised railroad embankment. As the Germans crossed the river they were met with murderous fire from the Americans.

As they landed, the Germans quickly found themselves engaged in brutal hand-to-hand combat.

Unfortunately for the Americans, there were simply too many Germans and slowly but surely the advanced platoons on the riverbank were wiped out. The Germans were then met at the railroad embankment, where according to Capt. Jesse Woolridge, they gave a thousand times more than they took, but even those positions became untenable. Reinforcements were quickly rushed in and smashed the beleaguered German troops.

This effort finally broke up the attack.

In Woolridge’s account, he states “it’s God’s truth that one Company of American soldiers beat and routed a full regiment of picked shock troops of the German Army.”

While the rest of the 3rd Division was pushed back, the 38th Infantry was giving the Germans hell.  Refusing to relinquish his position despite his exposed flanks, Col. McAlexander pulled his two battalions on the flanks back to form a horseshoe shape. The shape of his defense and the stubbornness with which he held it earned McAlexander and the rest of the regiment an enduring nickname – the Rock of the Marne.

The nickname eventually came to encompass the entire division for their stellar defense of their sector during the massive German attack. The Division would later adopt the special designation The Marne Division as well for their part in the battle.

At the Second Battle of the Marne, the 3rd Division also received its official motto. As French troops retreated, 3rd Division soldiers rushed to the scene to hold the line. The division commander, Maj. Gen. Joseph Dickman, gave his famous orders, in French so their allies would understand, “Nous resterons la!” – We shall remain here!

The battle was significant. Not just to the 3rd Division but to the entire American war effort. The Americans were relatively untested at the time and their success in holding back the Germans at the Marne garnered great respect from their European counterparts.

Stopping the German offensive also opened the way for the immediate counterattacks of the Aisne-Marne Offensive and finally the Hundred Days offensive that would eventually lead to Germany’s capitulation. The division’s stand was called “one of the most brilliant pages in the annals of military history” by the commander of the American Expeditionary Forces, Gen. John Pershing.

The 3rd Infantry Division would go on to distinguish itself once again during the Second World War. The 3rd was the only division to meet the Nazis on every front fighting from North Africa to Sicily, onto the Italian mainland, into Southern France before ending the war in Germany.

During its spectacular march against the Axis, some 35 members of the division were awarded the Medal of Honor for their action in combat including their most famous member, Audie Murphy.

The Marne Division later fought in the Korean War before spending the Cold War guarding Germany against possible Russian aggression. Since 2003, the division has been actively involved in the Global War on Terror and led the US Army’s invasion of Iraq.